Granted, this particular bit of news is only valuable to the (very) small crowd of people who purchased the T-Mobile Garminfone, but it's nice to hear nonetheless. The good news: Garmin has released an update to Android 2.1 (Éclair). The bad: it's a manual update.

The update process isn't complicated per se - but it's definitely more work than an OTA:

1. Download the software update package for your Garminfone which can be found here: http://www.garminasus.com/en_US/support/software/006-B1130-00.update

T-Mobile has been forced to lower the price of the Garminfone as a result of very weak demand - analyst estimates peg the number sold around 20,000. The phone was priced at $199.99, a price most reviewers agreed was too high for a phone with relatively weak specs:

Those in the market for an Android device were able to either get a more powerful phone for the same price, or an equally capable one for substantially less.

Read More
Update 05/26/2010: Well, as legit as the picture that Engadget posted looked, it seems that it was incorrect. I received an email this afternoon from T-Mobile announcing the availability of the Garminfone for $199.99 after a 2 year contract on June 9th. Seems all other details remain the same. You can view more information on the Garminfone here.

Sorry for the punny title – that actually hurt a bit to write.

The Garminfone is coming to T-Mobile very soon, so in order to help us figure out whether it is just a useless and superfluous toy or a candidate for your next phone/gadget, Engadget grabbed a review unit and put it to the test.

You can read the full review or if you want just the most important highlights, you can read the bullet points I handcrafted below, followed by a video and some photos:

If you've been waiting for Garmin's half-GPS/half-Android-phone (phonotaur?) Garminfone to drop, you now won't have to wait too much longer.

According to Engadget, T-Mobile is going to start shipping this highly originally named device in June for a relatively steep price of $199. 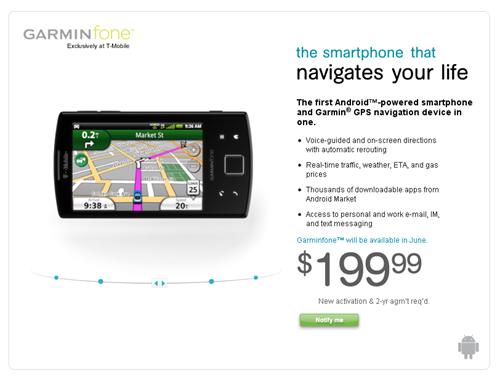 Considering that a superior EVO 4G is rumored to have the same price tag, the Garminfone deal may seem like a steal to only the most directionally challenged of us.

A number of real-life photos of the new Android-powered Garmin phone, called Garminfone just got leaked to TmoNews.com. With the full Garmin navigational experience loaded into the phone, Garminfone is clearly directed towards those of us that may be directionally challenged.

Let's have a look, shall we? Here are the most interesting of the leaked pictures: 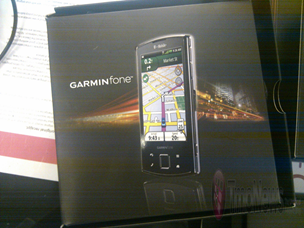 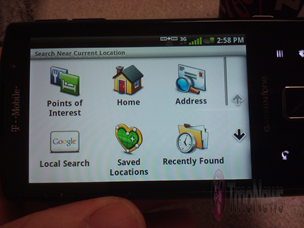 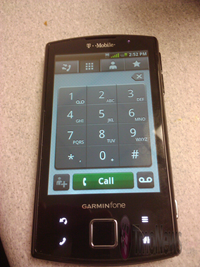 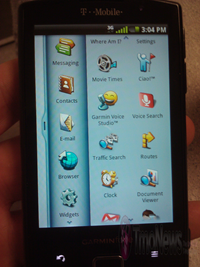 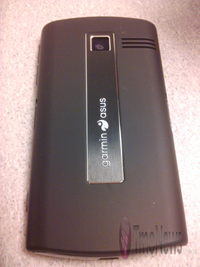 With just a few shots we get a quick glance at what we honestly expect to be just a moderate Android device…with no real “wow” factor.

Garmin-Asus have announced their first Android powered smartphone with the Garmin navigation experience fully integrated. Called the Garminfone (original, I know), it comes with a 3MP camera on board, a MicroSD slot supporting up to 32GB of storage and of course a custom version of Android.

Although the key selling point of the Garminfone is the turn by turn navigation, it offers a compelling set of features for any smartphone lover.