Last week we reported that the CyanogenMod team had added almost a dozen new phones and tablets to their list of officially-supported devices, including Barnes & Noble's increasingly affordable Nook HD and Nook HD+. At the time the B&N tablet builds weren't quite ready, but nightly ROM builds just showed up for both the 7-inch and 9-inch versions. Go forth, ROM addicts, and flash to your heart's content.

If you're looking for a cheap, mod-worthy tablet with a great screen, look no further. Today eBay Daily Deals has the Nook HD+, with a 9-inch, 1920x1280 screen and built-in access to the Google Play Store for just $119.99. It's a refurbished model, but that's $30 and 20% cheaper than the already-low $150 retail price. The eBay listing has free standard shipping, plus you won't have to pay sales tax outside of New Jersey and New York.

The folks on the CyanogenMod team are always adding new devices to their ever-increasing list, and over the last few days they've added no less than eleven more. According to a pair of Google+ posts, there are new officially-supported phones and tablets including two Barnes & Noble Nooks, a ton of Motorola devices, and a few Samsungs thrown in for good measure. Here's the full list:

*These builds may also work for the DROID RAZR MAXX HD.

I've taken a less conventional path into the world of Android. I owned a Honeycomb tablet long before I finally got my hands on my first smartphone, and before that, my first Android device was a Nook Color (I booted CyanogenMod from a microSD card, so it was legit). It is due to this background that I am sad to see Barnes & Noble end in-house development of its Nook line of tablets.

As a reminder, both tablets recently gained access to the Google Play Store to go with B&N's own curated platform.

Two days ago, Barnes & Noble dropped a bomb by announcing full Google Play integration for its Nook HD and HD+ tablets. Now, it's looking to move even more units than before by offering a killer Mothers' Day deal for the next week: the Nook HD will be $150, and the HD+ $180 for the base storage options. That's a killer deal.

For those who may not be familiar with the Nook HD lineup, here's a quick look at what each has to offer:

This deal is good from now until Mothers' Day (May 12th), so if you're looking for a tablet that won't break the bank (for you or mom!),

It's no secret that I've long been against calling the Nook and Kindle Fire series "Android tablets," as neither is more than a glorified e-reader to me. Today, Barnes & Noble dropped a bomb on that way of thinking, as it announced that the full array of Google Play services will now be available on the Nook HD and Nook HD+, essentially turning them into full-fledged tablets. 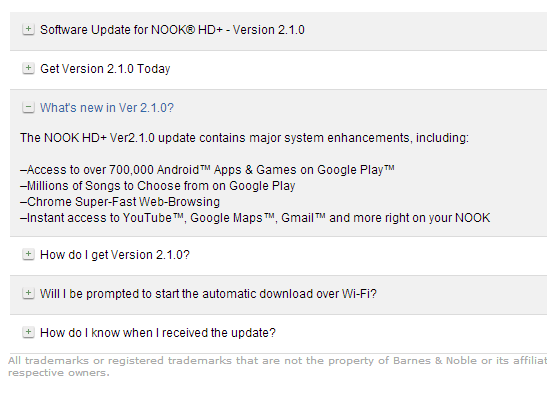 Moving forward, all Nook HD and HD+ tablets will ship with Google services – including the Play Store, YouTube, Gmail, Chrome, and the like – but for those who already own HD/HD+ units, the new features will be showing up via an OTA update to v2.1.0, which should begin rolling out today.

Looking to steal some of Amazon's limelight, Barnes & Noble tonight announced a new duo of NOOK devices that seem to take aim directly at Amazon's newest additions to the Kindle Fire family.

For some reason, B&N's press release covering the announcement focuses primarily on the tablets' weight – both the 7" NOOK HD and its 9" HD+ counterpart are the "lightest HD and full HD tablets," with the HD+ earning the title of "lightest, lowest-priced full HD tablet ever."