We found 5315 results for 'google search'

The information you get from Google searches isn't always as reliable as it sounds, but when it comes to simple math, you can bet the search engine is giving you more accurate information. Now Google is turning things up a notch by tossing a calculator widget into your search results to help plan out your mortgage and other loans. 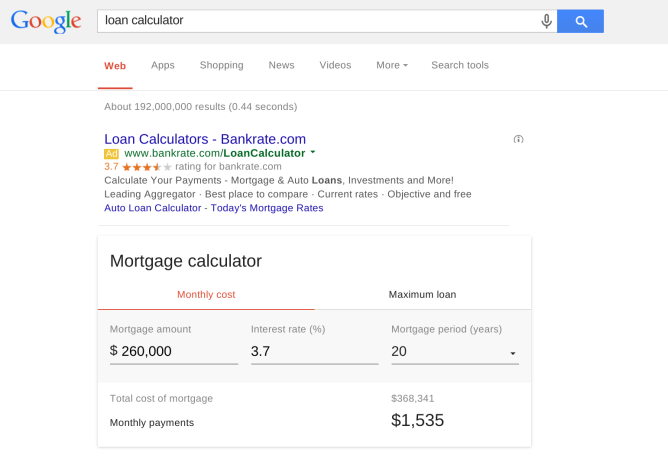 To get the loan widget to appear, search for terms along the lines of "interest," "loan," or "mortgage" calculator.

Google has always been at least somewhat mindful of moviegoers using its primary search tool to get information about recent and upcoming movies. The current Knowledge Graph that you see when searching for movies, actors, directors and so on is pretty good. But if you search using the official Google Search app for Android or search in Chrome for Android starting today, you might see something altogether more interesting. Check out the animation below, straight from the official Google+ account for Search:

In 2014, the US was shocked to see a flock of sea hawks fly in from the northwest and, despite normally preying on fish, completely devour a team of broncos from the Rockies. This year the birds are still on the offensive, but a group of patriots from New England have banded together to stop them. On Sunday, we will get to see the two sides do battle in a giant bowl.

Google's developers took a couple of weeks off for the holidays – or from my perspective, they gave me a couple of weeks to rest – but now they're back and it's time for the app updates to resume. Naturally, it's time to breathe life back into the teardowns, and we're back with a big one. Google Search v4.1 began rolling out to users yesterday, and we've already seen quite a few little adjustments and improvements.

There's an elite club among Android apps: those chosen few that have been consumed by enough people to surpass the 1 billion installs mark. Most of the names found on this list come from Mountain View. Gmail was the first to cross the threshold (discounting Google Play services, which comes pre-installed on every Android device with access to the Play Store), followed by Maps and YouTube. Facebook has also passed the milestone, though I'm not sure how many of our readers are particularly happy about that one. Now the Google Search app has joined the ranks.

What's a digital single market? It is essentially the EU's attempt to regulate how businesses and governments alike should behave on the web, particularly in regards to competition, net neutrality, and privacy.

You can navigate the Android TV interface using a remote control or dedicated app, but Google would really like for you to use your voice. Even if you're typing, the company would prefer you search for what you're looking for, rather than browse manually. This is Google, we're talking about.

The TV version of the Google search app has now found its way into the Play Store, which should allow for easier updates going forward, even if there's no particular reason to rush and download it right away.

You can add a few new tricks to the list of stuff Google search does. Just ask your phone or tablet to flip a coin, and it will be done. This was actually announced by Google last week, but now they've added a die. Neat.

American political satirist and future host of The Late Show Stephen Colbert is five feet, eleven inches tall, ever so slightly taller than the average United States male. Allegedly - we've only got his truthy word for it. So when Colbert Googled himself on the toilet and found that the search engine's automatically-generated answer to the question of his height was a mere 5'10", he became upset. In the way only he can, which is to say, immediately suspecting a conspiracy to bring him down from the lofty height of 71 inches to merely 70.

We've been waiting on a big update to Google's search app, having seen screenshots here and there that hinted at an updated design. With today's new Lollipop developer preview, the Google app's 4.0 incarnation was made available. We've got a download at the bottom of the post, but be sure to read the instructions first as getting this up and running on pre-L devices requires some extra fiddling. Also, you'll need to be rooted.