Over at the bustling hivemind of xda-developers, poster Carsten4207 has just published his first app to the Market, and it's one with a neat little trick. The app, when enabled, uses the proximity sensor to determine whether your phone is in your pocket/face-down or facing up on a surface. You can then decide whether or not you want your phone to vibrate for incoming SMS messages depending on the situation.

Recently, Wolfram Alpha LLC dropped the official WolframAlpha app into the market.  It is one of my favorite services and I purchased it ($1.99) as soon as it came out. For those not familiar, this is a clip from the "about" page of WolframAlpha to give you some idea of what this is all about:

Wolfram|Alpha's long-term goal is to make all systematic knowledge immediately computable and accessible to everyone. We aim to collect and curate all objective data; implement every known model, method, and algorithm; and make it possible to compute whatever can be computed about anything.

Everyone knows that smartphones are awesome, but it’s hard to beat using a large screen and full keyboard to control a device. Developers Peter Mora and Zoltan Papp believe they have come up with a compelling compromise: Webkey, for Android. Webkey allows users with a rooted Android device to text or call contacts, view SD card contents, and more - all from a web based interface. 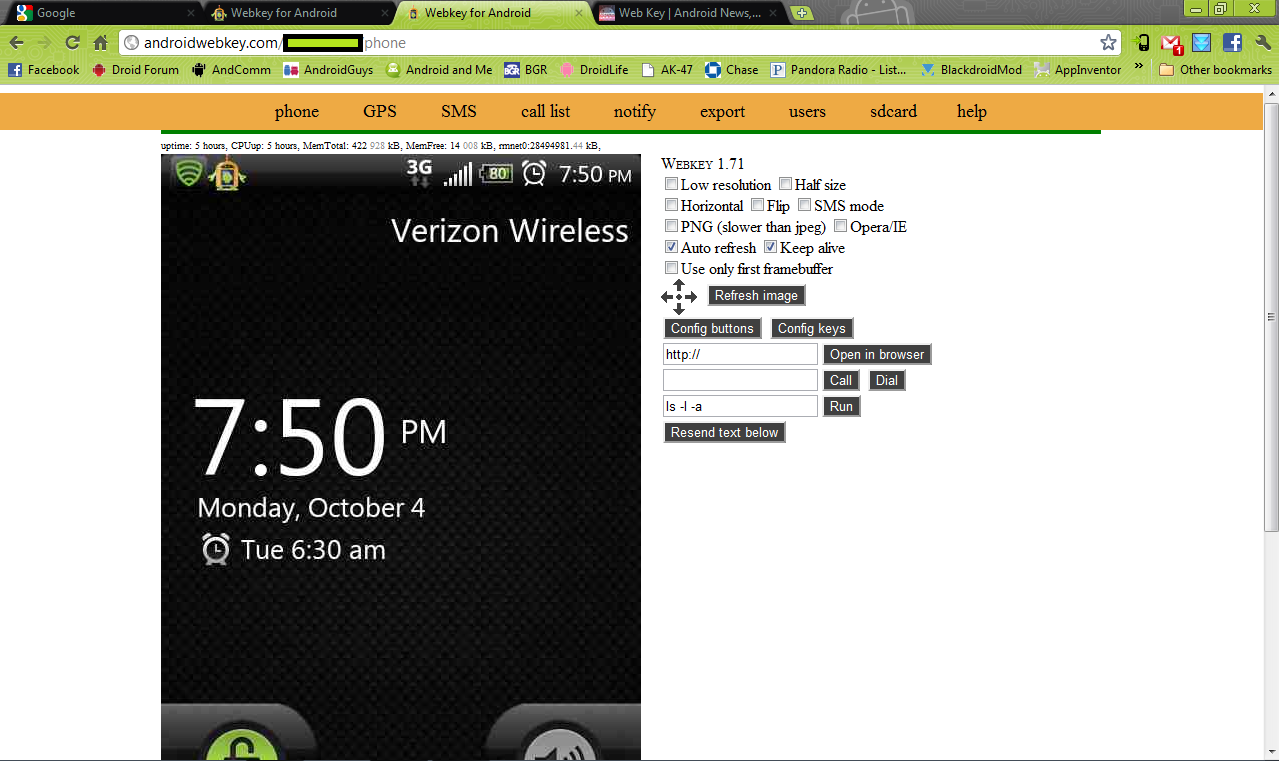 Webkey's interface leaves a lot to be desired, as it is more bare and utilitarian than polished and perfected.

Well isn't this a surprise, Nokia? HTC's just posted their profits for Q3 of 2010, and not only are they almost double those of Q3 2009, they are, in no small part, due to Android, according to RBS analyst Steven Tseng.

That's right - the company has posted profits of T$11.1 billion, or about $360 million, for the months of July, August, and September. By ways of comparison, last year's Q3 profits were a mere T$5.695 billion, or about half of this year's profits.

This is really no big deal for Verizon users who have been able to do that since March but, thanks to some creative tweaking, the all-carrier version of Skype for Android can now make calls over 3G in the US. If you remember, the version distributed in the Market prompts you to enable WiFi in order to make calls to both Skype and regular phone numbers.

Xeudoxus (known for his work on Dark Edge) got a bit creative with the Skype apk and has released it to the on-the-go Skyping masses.

Last night, @IncredibleDoes threw a shout out on Twitter to let the world know that HTCSense.com was now live.

While the selection of users and phones that can utilize the service right now is very (more like extremely) limited, it is still exciting to see this coming to fruition. There are devices both upcoming and already out that are slated to receive the new Sense, and it is nothing short of mind-blowing how much functionality they've added.

Looks like the already-awesome AppBrain App Market app (yea, it's a little hard to wrap your head around that one) has been updated today, and now includes some pretty awesome new features:

Cloud to device uninstalls are by far the big winner there - AppBrain already allowed some pretty awesome remote control over your phone's apps via your PC, and remote uninstall is a major addition to the existing feature set.

Sony's Crackle app has landed in the Android Market, and brings streaming of original shorts, TV shows, and movies to Android. The app is free, but requires a premium subscription to view TV shows and movies. At $5/month, the premium content isn't necessarily expensive, but after quickly running through the app, I'd have to say it's probably not worth it unless you're pretty desperate.

A word on the app itself: it's small, installs quickly, and runs smoothly.

Yesterday morning, Lifehacker published an article titled "How to Break Down the Barrier Between Your Android and Computer," and it's well worth a look for any Android power user. The article is broken into three sections: Two-Way (Android <-> Desktop) and One-Way (Desktop -> Android) and (Android -> Desktop).

Be sure to hit up the source link to check out their app suggestions!

Read More
If you are unfamiliar with rooting or ROMs, you can check out our primers here, because we're going to talk about it:

User lalexi over at xda-developers just posted a link to HTC's official release of the Desire's kernel source code. This is very good news for the development community because, as it stands, developers have to simply patch bugs that occur when trying to overclock the processor and getting things to work, sometimes incompletely, trial-and-error style.