T-Mobile announced a great many things yesterday, but not all of them were reason for customers everywhere to rejoice. No, some of the goods are reserved for a select segment of users. Starting today, the carrier is issuing an over-the-air update to the Galaxy S5 (G900TUVU1BNF6) that enables support for voice over LTE connections. To coincide with the news, T-Mobile's VoLTE is now available in a total of fifteen markets.

The original Anomaly Warzone and follow-up Anomaly Korea were undeniably two of the best titles to come out on Android in the last few years. These games take the tower defense genre and turn it on its head by putting you in the control of the creeps. Under constant attack by defense towers, you have to repair, upgrade, and manage your units to reach the goal. It's much the same idea in the upcoming Anomaly 2, but you've got new units and some new gameplay mechanics to figure out.

The day is here. AT&T and Sprint customers who have been raring to get their hands on the new best big phone out there will now have their chance. Both carriers are launching the Galaxy Note 3 today. If you're the type who prefers to buy their phone online, head over to either website, as both carriers are now shipping the device. 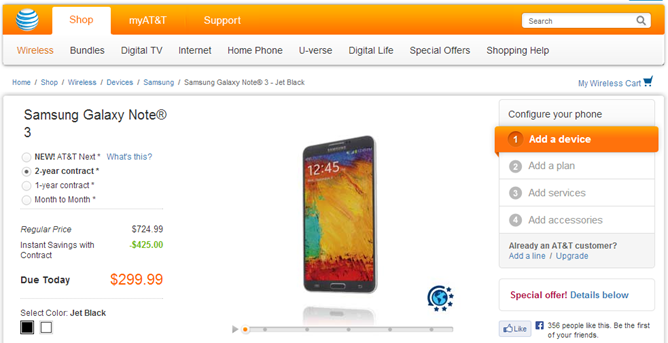 The Galaxy Note 3 will set AT&T customers back $299.99 with a two-year contract, which is less than the $349.99 Sprint is charging its customers upfront for the same phone.

Dedicated Android fans will probably be a little disappointed that the latest update to HTC's One M8 flagship on Sprint doesn't include the bleeding edge 4.4.4. But it's pretty close, 4.4.3, and Sprint has thrown in a couple of notable expansions specifically for its network. In addition to the small back-end improvements in 4.4.3, the 2.16.651.4 release adds the Wi-Fi Calling feature that Sprint has been slowly rolling out for the last few months. Black Friday has come and gone, but we're not done with pre-holiday deals by a long shot. Cyber Monday is upon us, and the deals refuse to quit. A whole bunch of what we're seeing today is an extension of sales that have been running since last week, but there's plenty of new stuff, too. Here, for your convenience, we've rounded up all the best deals we've spotted.

Update: We've heard back from Sprint on the "Restriction to benchmark sites removed" line. Here's what a representative told us:

During the development phase of this device, we had blocked benchmarking sites/apps. Now that it is released to our customers this fix will allow users to download benchmarking apps on their note 3. Hope that answers your question.

So presumably any favorable treatment that the Galaxy Note 3 demonstrated in review units, as shown by the Ars Technica report below, is still in effect.

Samsung has been in hot water for the last few days thanks to a minor controversy over benchmarks on the Galaxy Note 3.

This week's roundup is brought to you by Expense IQ - Expense Manager from Handy Apps. This amazingly complete expense tracking system has a solid and colorful UI, and just about every possible checkbook, alert, and tracking feature you could want.

We've been seeing a handful of Samsung flagships get updated to Lollipop here in the United States, where the lion's share of phones are still sold with shackles firmly attached to the carriers. The standard international model of the Note 4 uses Samsung's own Exynos chipset, but there's also a variant with a Snapdragon 805, model number SM-N910F. Users in Germany can access the official Lollipop update on these phones today via Samsung's Kies program, according to SamMobile.

European markets tend to get updates in batches, so once the over-the-air update starts in earnest you can expect it to propagate quickly.

Out of the gate, the Samsung Galaxy Gear has made for the tough sell. It's hard enough to justify dropping $299 on a watch, but it's even more difficult to shell out that much on one that only pairs with a single device. Customers who don't want the Galaxy Note 3 or aren't ready to cut the cord on their current handsets have thus far been out of luck. Of course, Samsung has been upfront from the beginning that it planned to release support for slightly older Galaxy devices down the road. Now the company has supplied more of a timeframe.

Update #2: T-Mobile has started updating support pages with a clarification on those Wi-Fi calling enhancements. The phones now have support for Gogo inflight texting, a feature the company announced as part of Un-Carrier 7.0.

Google isn't the only company lumping big updates on Wednesday. T-Mobile is sending out Android updates to four, count 'em, four phones on its network. The low-priced Galaxy Avant is getting upgraded to 4.4.2 (it ran 4.4 before), but the LG G3, HTC One M8, and Galaxy Note 3 all get smaller updates with improvements for T-Mo's Wi-Fi calling.