Chrome OS is a relatively secure OS, which is one major reason why more businesses are opting for laptops running it. However, a new bug has been spotted that could reveal location history to anyone who has physical access to your Chromebook.

The OnePlus 5 and 5T haven't received any software updates since May, and that update inexplicably removed image stabilization. We had to wait until September for the company to explain itself, revealing that a critical bug had been found in the communication module and that fixing it involved discussion with carriers, further delaying things. Almost two months after the revelation, OnePlus is finally rolling out a new update to the OnePlus 5, fixing the big bad bug, updating the security patch, and restoring stabilization to the camera. The one part of them that does have a name is TCL's "Dragon Hinge," which uses a complex system of gears to facilitate the folding motion of these concept devices. We had a chance to go hands-on with some Samsung test devices running the company's new One UI - the latest in a long line of TouchWiz rebrands - and the feature likely to generate the most attention is almost certainly the new "Night theme" option. Basically, night theme sets nearly every stock app, along with the launcher and lockscreen, to an all-blacked-out look - something Android enthusiasts have been asking of device makers for years. My initial take is that Samsung's done this pretty well, and essentially every stock app on the test device had a dark theme. Here's a quick look at some of those apps in a gallery.

Earlier today, Google started rolling out a major update to Google+ for Android. Together with our readers, we've examined every corner of the app and found a whole bunch of things that are new to this version 4.2 but haven't been mentioned in the official announcement. You should definitely read through the list if you haven't yet.

However, one new feature that I found fascinating managed to fly completely below the radar because it's located not within the app itself but rather in the widget menu. That feature is a brand new widget called User Locations.

As you have probably guessed from its name, User Locations shows you your contacts' locations. 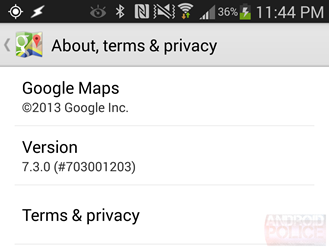 The expanded notification now carries a lot more information than before. The additions are:

Now that the insane week of Google app updates has passed (gotta love those Rollout Wednesdays, right?), I've had some time to dig into the APKs and have found a number of interesting things in some of them. 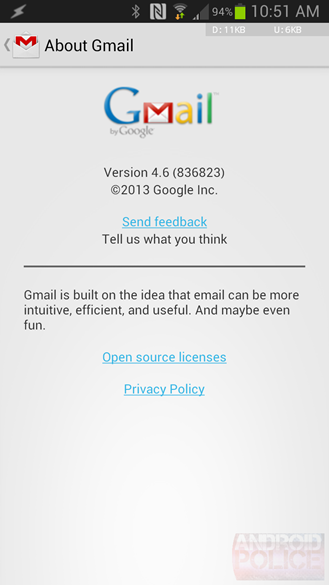 Ads are coming to Gmail

The most significant under-the-hood and probably not active yet addition to Gmail 4.6 is ads. Yup, ads are most definitely coming to Gmail for Android which managed to stay ad-free all this time, unlike its web counterpart.

If you remember, Gmail on the web contains multiple ads along with the new format that looks like email messages in the Promotions folder.