Google said it would do it, and now it has. The latest update to Android's Gmail app has enabled images automatically, now made safe because Google is serving up the images after hosting them on its own proxy servers. Users will no longer need to tap the "show pictures" message above the email content. 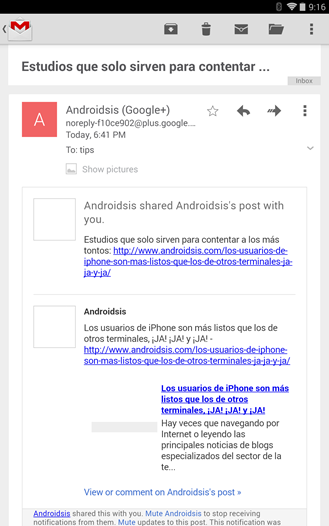 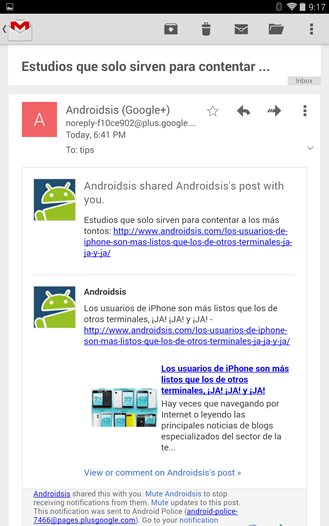 We're looking through the application now to see if there are any more changes - this thing is so fresh that Google hasn't even updated the Play Store description.

Of all the announced new features of the Nexus 5 and Android 4.4/KitKat, one of the cooler ones was a new dialer colloquially known as the "KitKat dialer." It features a revamped UI and includes the ability to search for businesses, contacts, etc. right from inside the dialer. It also features Internet-based caller ID. The name "KitKat dialer," however, is not entirely accurate.

Google Dialer (its official name) is not technically part of KitKat because it is not included in AOSP.

Google Calendar has been updated recently, but a quick glance at the change log only finds "Bug fixes and performance improvements." What actually happened? Not much, but what's there is a doozy - replying to calendar events from within Gmail should now be a much less tedious experience.

Now when you press Yes, Maybe, or No in an email invite, you will get a toast notification confirming your response.

Google's default Android keyboard has typically emphasized simplicity over anything else, but it has picked up quite a few new nice features over the years. It now offers Swype-style gesture support out of the box, and after the latest update, you can choose what color your swipe trail and accent colors should be.

Following the Android 4.4 redesign, the Google Keyboard defaults to a subdued black and white color palette.

As it turns out, that's because the new feature Google stuffed into the app only shows up upon very specific conditions.

An update to Gmail started rolling out this morning, bringing it from version 4.6.1 to 4.7. We have the APK for you below, as usual, because waiting is for suckers.

The most obvious new addition to Gmail 4.7 is the Vacation Responder. You can set start and end dates, enter a subject and some text, and check a toggle to only send the vacation response to your contacts.

Google Play Books update 3.1.17 is slowly rolling out, and I'm glad to report that it finally brings a feature a lot of you have been dying to see - book uploading directly from your devices. As always, we have the APK which you can install if you don't see the update just yet right below.

As I already mentioned, you no longer need to go to Google's website to upload your own books - 3.1.17 allows you to upload PDFs and EPUBs directly.

Google is rolling out an updated version of Hangouts, and while version 2.0.2 doesn't introduce much in the way of exciting new features, it squashes a handful of annoying bugs introduced when the app took on the ability to handle SMS and MMS messages.

The newer, SMS-tackling version of Hangouts came with a few quirks that have been rubbing more than a handful of users the wrong way. For starters, the app converted any text message sent to multiple receivers to an MMS, which is chargeable for many people.