Yes, there was just a sale post yesterday, but the Android app developer community is apparently feeling more generous than usual this week. If you're in search of a distraction from your daily grind, we've got cheap fun ahead.

Are you taking full advantage of the Play Store? Probably not. Who has time to poke around in there for good deals? Well, we do, apparently. So here are all the deals we've been able to find today. Don't say we never did anything nice for you.

The weekend is nearly over, but that dosen't necessarily mean the fun has ended. There are still plenty of great apps and games on sale, and isn't cheap fun the best kind?

You definitely want more apps, but you don't want to spend unnecessarily large amounts of money. It's understandable, but you would have to track down a bunch of sales to make it happen. Well, I guess we could do that for you, but you owe us.

If you're looking for a good throw-in-your-bag tablet with an excellent form factor and beautiful display, it's hard to beat Amazon's 8.9-inch Kindle Fire. Sure, it doesn't have the Play Store, and belongs in a completely different playing field than something like the Nexus 7, but for a consumption tablet, it can deliver the goods with the best of 'em thanks to Amazon's massive collection of Kindle books and quick access to Instant Video for Prime members.

Good grief, but the people who run eBay's Daily Deals portal really love their Android tablets. After discounts on Nexuses for the last couple of weeks, today we get one of ASUS' flagship tablets at a significant discount. A refurbished Transformer Pad Infinity TF700T (the Tegra 3 model from 2012) is going for just $289.99

with free shipping. That's $210 off the current retail price. 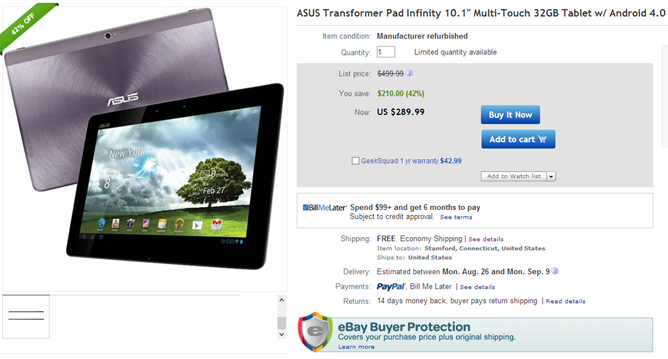 The bad news is that it's a refurbished tablet.

The weekend seems to go by so fast, right? Well, maybe with some new apps and games to distract you, the work week will fly by too. Of course, we have some sales to facilitate that.

Update: It looks like the seller has increased the price to $175, which makes this not such a good deal.

The 2013 Nexus 7 is probably the best Android tablet you can buy now, but the 2012 model has been given a new lease on life with the Android 4.3 update. If you still want one, the 32GB last-generation Nexus 7 is on sale through eBay Daily Deal today for a downright reasonable $139.99.

eBay certainly seems to like their Nexus tablets, not that we're complaining. After featuring the new Nexus 7 yesterday (and selling out rather quickly) they've repeated the Daily Deal on the Nexus 10 from exactly one week ago. That's $369.99 for a brand new 32GB Nexus 10

, with free shipping to the United States.

As of this morning, we finally know when the HTC One is launching on America's reddest network: August 22nd. But if you're not the kind of person who pays full price for anything, and obviously not on-contract smartphones, you probably know you're better off waiting for a deal on a new phone from a 3rd-party retailer. Wirefly to the rescue - they're already accepting pre-orders on the VZW HTC One, and they're charging a full 25% less than what Verizon's asking, at $149.99 for both new subscribers and upgrades.