How many times have you thought "you know, this battery widget would be much better if it had some sort of spinning thing around it." or "I would really like to see my remaining battery percentage in the center of a flower."? If you've ever muttered either of the above (or anything similar), the solution to your quandary just landed in the Play Store. It's called Animated Battery Widgets, and if you can't figure out what it is just by reading the name, then I feel sad for you.

Cthulhu Saves The World is styled like an old SNES, 16-bit RPG, and it's every bit as charming as Chrono Trigger or Final Fantasy.

For the unaware, Dead Trigger puts you behind the gun in the ongoing unholy war against the undead - it's kill or be killed eaten in this post-apocalyptic action-horror thriller.

Lightopus is a top-down arcade-style game that prides itself on being very pretty. In this game, you play as the last adult Lightopus, and it's up to you to save the young of your species from the monsters of the Abyss. You do this by zipping around the screen and dodging enemies as you collect your offspring, known as bulbies.

The description isn't lying when it says the game is system-intensive.

While not quite as famous among the Android gaming community as, say, Rovio or Square Enix, Com2uS has had its fair share of hits - most notably, the company has churned out such popular games as Homerun Battle 3D and Slice It. Now, the devs are back at it with something of an Angry Birds look-a-like: Swing Shot.

Rather than shooting birds at pigs, however, Swing Shot starts off with monkeys shooting stones at other monkeys, albeit ones that have been cursed by an evil witch (after, that is, you either create an account or log in as a guest - I just opted for the latter).

As Google+ continues to get better, it's only inevitable that it'll start showing up in more and more places. And Google intends for that to happen as soon as possible, from the looks of it - Mountain View just announced its Google+ Developer Platform.

The Google+ SDK, which should be available "in the coming weeks," will allow Android app developers to integrate G+ into their products more seamlessly.

Swiftkey 3 recently arrived on the Play Store, and not too long afterwards, the company has posted a statement on its blog letting us know that the app is currently the best-selling paid app on the Play Store. Not too bad, SwiftKey! Of course, the biggest challenge is ahead, as Google announced yesterday that, from Jelly Bean onwards, the default Android keyboard will attempt to predict your next word. Which smacks just a little of SwiftKey's pitch.

Google Currents has always been a pretty impressive app - arguably the best Android news aggregator around town. Especially praised has been its beautiful UI; however, that didn't stop Google from looking at what it had and making it even better. 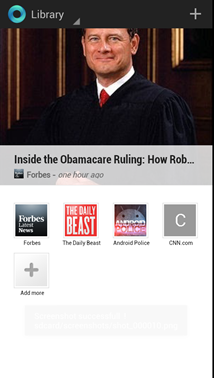 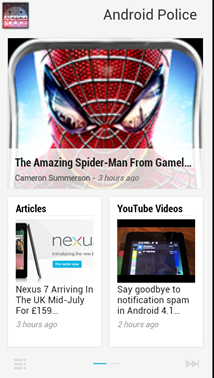 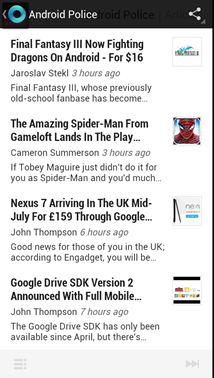 Indeed, the app just hit version 1.5.1, and the UI has been updated to "Android standards." Notably, the top navigation bar now features "auto hide" and "touch-to-show" controls, and it includes the library/trending toggle that was previously located elsewhere.

Google Drive just saw its first update since back in April when it shed the Docs nametag. The update is relatively minor, but still brings some worthwhile enhancements and tweaks:

Frequent users of the Drive app will surely take pleasure in the faster navigation while sync is in progress, as the app could get quite sluggish at times; the ability to upload all file types is definitely a welcome improvement and one more step in Google's quest to take out cloud storage heavyweight Dropbox.