One of the weaknesses of Android has been a lack of high quality games. Sure, there are some very good games, but not nearly as many as there should be, and they are often hidden in the Android Market. Fortunately, Android gaming momentum has been increasing with hits like Angry Birds arriving on Android recently. Now, OpenFeint is further increasing that momentum with the announcement of twenty Android titles in the next month, including several top 10 iOS hits like Fruit Ninja, MiniSquadron, and Super Slyder.

Read More
Update: Fruit Ninja is now available in the Market!
At the AppNation conference today, I got a chance to talk to Shainiel Deo, the CEO of Halfbrick, a company most known for its best selling iOS game Fruit Ninja.

Fruit Ninja is an addicting game in which you try to slash as many pieces of fruit thrown in the air as possible, getting bonus points for combo slices, while avoiding bombs at all costs.

While we all wait for Google to officially institute PayPal as a payment option in the Android Market, Scoreloop has decided to beat Google to it by including it in their latest update. Developers who use Scoreloop with their games can now use PayPal to offer in-game purchases to gamers.

In-game purchasing is the key to many games success, and its implementation is essential if Google would like to lure developers to their platform.

Angry Birds, one of the top selling games for the iPhone, hit the Anroid Market this morning.

Rovio, the company behind Angry Birds, promised an off-Market beta earlier this week, but got so much positive response that it decided a Lite Beta version in the Market was actually a much better idea. In fact, the Android launch is turning out to be so popular that Rovio's own servers are are too overloaded to handle all the traffic. Panzer Panic is a game that has been available on the Android Market for quite some time now in the form of a paid version, costing €2.99 (approx. $3.80 at the time of writing). Although it offers a really cool experience, some users clearly thought that the price was a little too steep, as it has only managed between 1000 and 5000 downloads in the Market. In response to this, the developers have just released a free version, which is exactly the same game, but with an advert on the bottom of the screen.

Mark DeLoura, who was hired by Google about 5 months ago to fill the much-needed position of Games Developer Advocate, just announced he has left the company.  This marks the second big name to leave Google's gaming department (Games at Google) this summer.

The reason for Mark's departure from Google? It wasn't a perfect fit for him - or at least that his story and he's sticking to it! In the official announcement on his blog, Mark wrote:

"I enjoyed working with many of the people there, but it was not the perfect fit for me."

Mark also spoke about the progress that has been made over at Games at Google, outlining the building of apps in the browser and the greater developer flexibility.

In what is best described as a roaming tower defense game, Guns'n'Glory, by HandyGames, allows you to play as bad guys who attempt to ambush settlers and steal their gold. Starting off as a lone gunman, the more settlers you kill, the more gold you’ll gain, which in turn will allow you to hire more bandits to help you out in your evil ways.

Available for free on the Android market, Guns'n'Glory offers a unique style of gameplay by melding several genres into one title.

Dan Ruby, Research Director for ad firm Chitika, just pinged us to share his latest Android research findings. The research compared the Apple and Google mobile platforms to determine which is more profitable for advertising, and the answer is overwhelmingly Android. When we say overwhelmingly, we mean by 80%: 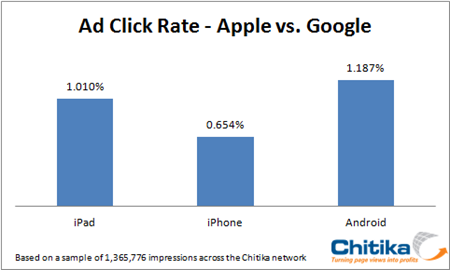 As usual, this is based on Chitika's ad network - so while the numbers are likely pretty accurate, they're not necessarily official.

Let's face it: browsing the Android Market on your desktop currently sucks. For one thing, there aren't any categories - just "Top Free" and "Top Paid." For another, there's no search!

On your phone, the situation isn't much better - you can search, which is good if you know what you're looking for in advance but you still can't filter those results. And discovering new apps is just downright horrible.

One of the most popular games for the iOS platform has just been released for Android, following a rapid porting process by Galcon developed Phil Hassey. On his blog he speaks of his desire to support even low-level Android devices, going as far as to purchase a G1 to use as a development test-bed. The porting process took a little over a week of code translation from the iPhone’s Objective-C to the Android NDK’s C++ and Java.