Today a number of great games have all become available for NVIDIA SHIELD all around the same time. To make sure that you have something to play these titles on, we're giving away three bundles of hardware. Sure, you could already play most of these games on your phone or tablet, but wouldn't you rather fire them up on an NVIDIA SHIELD console?

The NVIDIA SHIELD, arguably the best Android TV device on the market, gained support for 4K streaming of Google Play Movies yesterday. To commemorate the occasion, we're teaming up to give away two of them to lucky Android Police readers. Even better, each winner gets a $25 Google Play gift card to help stock up on 4K content. There's a race to the bottom in the home entertainment world, created by the lower pricing for set-top boxes, the near ubiquity of built-in "smart" features for new televisions, and not least, Google's own low-priced efforts with the Chromecast. Compared to the rock-bottom pricing of gadgets like the Chromecast, the Amazon Fire TV Stick, and the market-dominating Roku boxes, Android TV is in a pickle. Stand-alone ATV units start at around $100, which is more expensive than the Roku you might buy (or the apps that come free with your TV), and less expensive than the home game console you might already have.

Read More
DISCLAIMER: I bought an iPad Air 2, and I bought said iPad Air 2 after owning the first iPad Air since launch day last year. I sold my iPad Air so I could do this. I really like my iPad Air 2, it's pretty great. I also really like Android. The following article contains my opinions, anecdotal evidence, subjective analysis thereof, and did I mention opinions? There are opinions. Also, this article is very long, so many sections just have side-by-sides of random Android vs iOS app comparisons presented without comment.

I've owned an iPad Air since the original model came out last year (my first iPad), and when the Air 2 came out late last month, I dove right in and bought another. Phone protection is something that is either done by habit or is not cared for; I am a person who does the former. On a day to day basis, your phone is subjected to all types of abrasive materials, hard surfaces, accidental spills, random things in your pocket/bag etc. It is for this very reason that I simply must have a case on my device at all times.

Let’s look at phone protection from another perspective: When you purchase a device, it is an important investment. This phone will at some point or another be sold, given to a family member, or no longer used after a period of time.

The Nexus 5 was perhaps the worst-kept secret in tech this year, but nonetheless, rumor and speculation built up a category 5 hypestorm around it - everything from the farfetched, like revolutionary camera tech and flexible displays, to the mundane-but-desirable, like a much larger battery or 3GB of RAM.

But now the Nexus 5 is finally here, and Google has, for the most part, built a very iterative product. As with every Nexus, the design is all-new, though the phone still carries that typically understated Nexus look. The display is just a bit larger, at 4.95", the 8MP OIS camera isn't a huge step forward, the phone isn't all that much lighter or thinner (9g and 0.5mm, respectively), and the battery has grown a paltry 200mAh. One look at the Razer Phone will have you saying "Nextbit Robin 2.0." The styling is clearly derivative of Nextbit's, down to the sharply squared-off edges and large bezels. But gone is the Robin's two-tone paint scheme, instead replaced with a black rubberized finish designed to resist fingerprints and add grip. Rumors about Chrome OS running on a tiny HDMI stick started leaking out a few months ago, but we were all wrong about what it was going to be. The Chromecast is not a shrunken down Chromebox – it's not even really a Chrome OS device in the strictest sense. The Chromecast is Google's latest attempt to be invited into your living room. It also might be the first one to succeed. 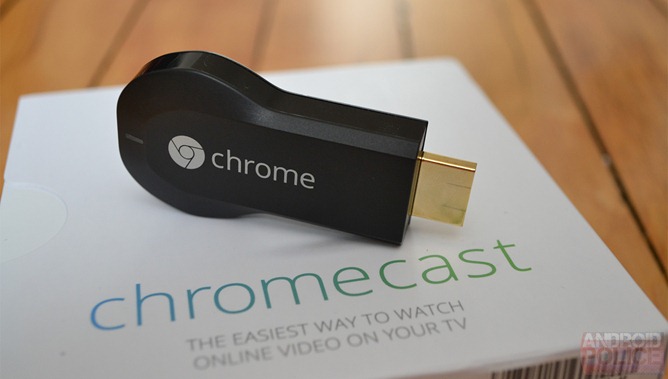 The Chromecast doesn’t try to create a new ecosystem – it simply asks app developers to append a few lines of code to give it a piece of the streaming media action.