Xiaomi won over big parts of the smartphone market with its affordable but well-equipped smartphones, and now, the company has its sights set to the premium market. Along with a plethora of other devices, it has just announced its latest pair of flagships during its September 15 launch event, the Xiaomi 11T and the 11T Pro.

As you may have noticed, the 11T and the 11T Pro have lost the "Mi" moniker many Xiaomi flagships and sub-flagships used to come with. That's in line with the rebranding communicated by Xiaomi earlier this year, with the company now focusing on its core brand name. But that doesn't change the fact that the 11T series is effectively the follow-up to the excellent Mi 11 (and Mi 10T) flagship lineup, with small but thoughtful tweaks to the formula.

Differences marked bold in this table.

A first comparison between the 11T and the 11T Pro shows us how incredibly similar the two phones are, both to each other, but also to the Mi 11i. The design doesn't reveal any significant differences between the two at all. Both come in the same three colors (Celestial Blue, Meteorite Gray with a brushed metal look, and Moonlight White), featuring the same design elements such as a huge triple-camera array in the top left of the glass back, with a tapered edge gently curving around the sides. There, both have a fingerprint sensor built right into the power button rather than into the display, which Xiaomi has done with many other phones before them. The front reveals a flat 6.67-inch 120Hz AMOLED display with a centered 16MP punch-hole selfie shooter. The primary camera setup consists of a 108MP telephoto, an 8MP ultra-wide with 120° field-of-view, and a 5MP telemacro with 2x zoom for both phones.

When it comes to the hardware, a few minor derivations are notable, though. The 11T comes with a MediaTek Dimensity 1200 processor while the 11T Pro has a Snapdragon 888. RAM and storage tiers (8+128/256GB) are the same across both, though the high-end model offers LPDDR5 RAM as opposed LPDDR4x. Another big difference is charging speed. While the 11T charges at a respectable 67W (giving you a full charge within 36 minutes), the 11T Pro takes things up a notch, featuring the same 120W HyperCharge known from the Mi Mix 4. Xiaomi claims that this will allow the 11T Pro to charge from 0 to 100 in just 17 minutes (though a review from Anandtech states that this might be a bit of an overstatement). Both 11T phones have a 5,000mAh battery, which makes the 11T Pro the first commercial device to offer 120W charging at this battery size. 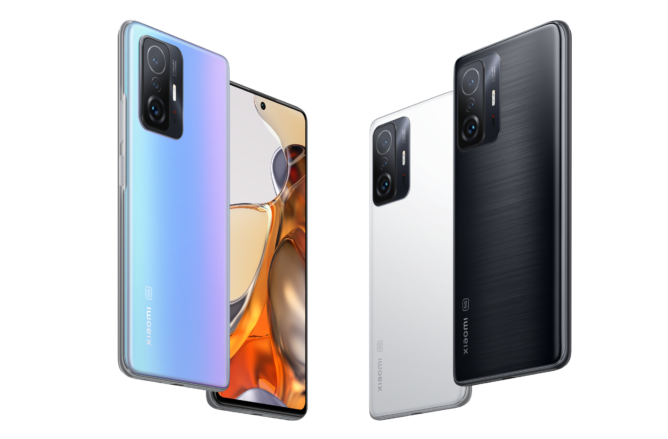 The 11T and 11T Pro are also the first to enjoy Xiaomi's new commitment to three major Android updates and four years of security patches, which is great to see. Unfortunately, they still run Android 11 (MIUI 12.5) out of the box, which means that the first update to Android 12 (slated to be released this or next month) will come pretty early in their life cycle.

Compared to the Mi 11, the 11T Pro brings nothing but smaller tweaks to the table — given the short time span between the two, that's not surprising. The 120W charging is one of the more impressive improvements, but there are also changes you might not love if you like big screens. The display is ever so slightly smaller at 6.67 inches versus 6.81 inches, and the resolution has been reduced to FHD+. Given that the battery is bigger in the new model and you don't have to plan your day around charging at all with its super-fast 120W charger, you would definitely win in the battery department, though.

The Xiaomi 11T will start at €499 while the 11T Pro will go for at least €649. For the latter, there will be an early bird rebate for pre-orders where the phone will only cost €599 for a limited time. It will be applicable in Germany, Italy, and France, with further details to follow later.

Xiaomi additionally announced the budget-level Redmi 10 to its global audience after showcasing it in China only earlier. For its sub-$200 price, the phone certainly seems impressive. Its design language is heavily inspired by its more expensive sister models, with the same centered hole-punch camera on the front and a triple-camera array in the top left of the back. It does look bulkier and boxier, though. Like the 11T series, the Redmi 10 also has its fingerprint sensor integrated in the power button.

While the Redmi 10 is among the first budget phones to come with a 90Hz refresh rate display, the rest of its hardware is decidedly more budget. It's powered by the Helio G88 — among the latest entry-level processors MediaTek introduced this year — coupled with 4GB of RAM and up to 128GB of eMMC 5.1 storage. A headphone jack, microSD card support, and USB-C are on board, though these are within the frame of what modern budget phones are expected to provide. What's more impressive is the addition of a 50MP primary sensor capable of producing high-resolution images and a 5,000mAh battery, though the Redmi series has always been known for good to great battery life. The company also announced the Xiaomi 11 Lite 5G NE (short for New Edition) but it's nothing more than a minor revision of an earlier model, the Mi 11 Lite 5G. The only notable differences we could spot are the new colors, the 20MP selfie shooter, and the switch from the Snapdragon 780G to the 778G. Thus, we'd like to point you to our review of the Mi 11 Lite 4G variant or the Mi 11 Lite 5G announcement for more details. The 6+128GB will cost you €369 while the 8+128 will go for €399.