BenQ has just revealed two new portable projectors with built-in 2.1 channel audio and Android TV — and we mean Android TV, not Google TV. The way that last bit works is kind of curious. But before we push our full reviews, let's dive into some of the details for both of these new battery-powered models.

The GV30 is the less expensive of the two models at $599 with a 720p 300 ANSI lumen display — a more useful standardized metric than some of the "LED lumens" you'll see on Amazon specials. BenQ says that should be enough to project a decent quality 80-100" screen, though you can go smaller or bigger. In the same vein, this is a DLP projector, not an LCD. BenQ claims a 24-bit color depth (98% of Rec. 709) with an LED light source and a contrast ratio of 100,000:1. It has features like autofocus and auto-keystoning at +/- 40 degrees. Inputs include a pair of HDMI (1.4b) ports and a combination display port/Type C PD charging port, and audio is piped via 2 4W speakers, plus an 8W woofer. And, of course, it's battery-powered. Precise size isn't specified, but it's rated for around 2.5 hours of battery life in normal use.

The design of the GV30 is meant to make it a little easier to use as an impromptu display — say, when camping or in the backyard. Rather than the sort of flat, squat box you're used to, it has a circular shape that lets you rotate it to tilt up or down by up to 135-degrees. Thanks to that, you can even project the display on your ceiling, turning it into a screen. Like the smaller model, it has 2.1 channel speakers built right in, but this time it's a pair of 5W speakers paired with an 8W woofer. You still have features like autofocus and autokeystoning, plus two HDMI inputs (2.0b this time), and that combination display port/Type-C for charging. It also supports ARC if you want to use it with a more advanced theater setup. Battery life, as with the smaller model, is rated for 2.5 hours in typical use.

The GS50 doesn't just have a sharper, brighter picture or more powerful speakers; it also has a more durable design. BenQ claims the GS50 is drop-proof for tumbles at up to 2.3 feet, and it has an IPX2 splash rating with a "waterproof" TPU inner layer. There's also an eye-protection feature that will cut out the picture if it recognizes an object too close to the lens — so if your kiddo sticks his face right in front of it, it will turn off rather than blind them. 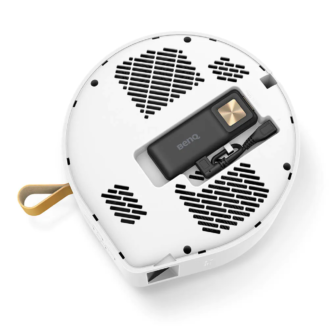 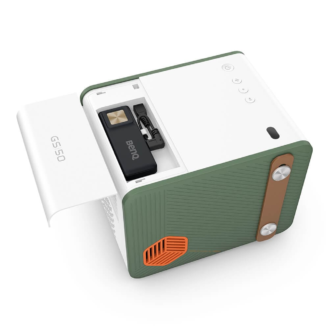 The way Android TV works on both of these devices is curious. BenQ ships them with a separate, standalone dongle that nests into a dedicated space for it. On the GV30, that's on the side beneath a cover, and on the GS50, it's under a panel on the top. Each ships with the QS01 dongle that fits perfectly inside, which we're told uses an AMlogic chipset, paired with 2GB of RAM and 16GB of eMMC storage, running a somewhat dated Android 9.0-based version of Android TV. The dongle supports both 2.5 and 5GHz up to Wi-Fi 5.

We asked BenQ why the projectors shipped with Android TV rather than the newer Google TV experience, and the company told us that they would have liked to include Google TV, but they couldn't. The company claims that Google considers projectors a separate category, and the GS50 and GV30 were somehow ineligible for Google TV. The update situation is also interesting, with BenQ claiming it will get patches at least once a year, which seems less than Google's typical licensing requirements for Play Store access would allow.

In addition to Android TV/Cast support, the projectors can also do Wi-Fi direct and Airplay. If you like, both projectors can also be used as a portable Bluetooth speaker — again, a boon to travel or things like camping. Unfortunately, though, it doesn't have official Netflix support, and BenQ tells us while that's being negotiated, you'll have to sideload a third-party app via Aptoide plus a separate app for navigation. That's kind of derpy, so hopefully it can get official Netflix support.

BenQ tells us that the design philosophy for both of these projectors was to make the on-the-go portable experience better. Rather than having to bring a separate Bluetooth speaker just to get a decent audio experience and deal with things like pairing or lag, BenQ wanted to bundle a more powerful speaker system into the projectors themselves. The company tells us they're the first 2.1 channel battery-powered portable projectors, and so far as we can tell, that's true. We've seen plenty of others with built-in stereo speakers, like the Xgimi Mogo and Anker Nebula Mars II, but we haven't seen a 2.1 channel setup before.

For more on both projectors, keep an eye out for our upcoming reviews. Pre-orders for the new projectors open today until September 30th, and we're told general availability will begin "at the end of September" from BenQ and retailers like Amazon, B&H Photo, and Best Buy.