We've been waiting on Unicode 14.0 since it was delayed last year due to the ongoing pandemic. After giving us an early preview in time for World Emoji Day in July, the Unicode Consortium is officially unveiling its newly-added emoji for 2021 — with a few long-awaited additions.

Although 37 new emoji might not sound like much, it's a much larger collection than the seven added last year. That number doesn't include all of the variations and skin tones also bundled in this release, which brings the total to 112 new designs. There's a salute, a single peeking eye, a melting face, and even a face holding back tears — perfect for the next time a friend texts you something supportive. 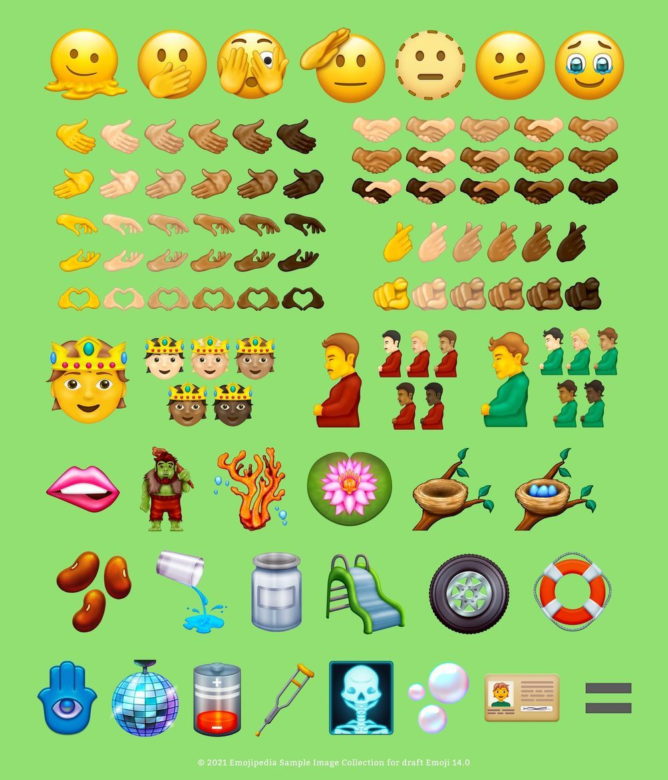 Apart from faces, choices include pregnant man and pregnant person, various hand positions, and more. A new "heart hands" emoji should make for a fun way to tell the important people in your life that you love them, while a troll icon should make for an appropriate response to pretty much anyone on Twitter.

Among the 838 new characters in #Unicode14 are 37 new #emoji, along with new emoji sequences, that are expected to show up on 📱s, 💻s, and other platforms sometime next year → https://t.co/deSr1g6m8k #絵文字 pic.twitter.com/xuTf8Os02K

Overall, these look similar to what we saw back in July, with a couple of minor changes applied to specific icons. The tears of joy emoji, for example, is now smiling, delivering an entirely different emotion than the original design from two months ago.

The Unicode Consortium is also, for the first time, officially adding formal support for different skin tones with the handshake emoji — something every major developer minus Apple had added on their own. This change should unify how it looks on all platforms, so when you're texting your iPhone-owning friends, they'll actually see the skin tone rather than a plain yellow tint.

These emoji will appear in a future Android update, likely planned for sometime in 2022. Of course, Google has figured out how to bring newer emoji to older platforms with Gboard and Messages, so don't be surprised if you see these on your phone sooner rather than later.