We were hoping that the lower-priced Galaxy S21 FE (for "Fan Edition") would be here by now, but Samsung seems to be hesitant to pull the trigger on its release. If a fresh set of retail leaks are any indication, it's right around the corner. Verizon has apparently prepared the ubiquitous "quick start" insert for its carrier version of the phone, and someone got their hands on it.

That someone passed it along to SamMobile, who kindly posted it for the rest of us to see. There's not a ton of relevant information on the phone itself, at least nothing we didn't already know: it's a basic Sammy design, aping the S21 series but apparently with a single-piece rear (probably polycarbonate) and a triple-camera array. The customer graphic for the SIM card tray doesn't make any mention of a MicroSD card slot, which is in line with what we've heard before. 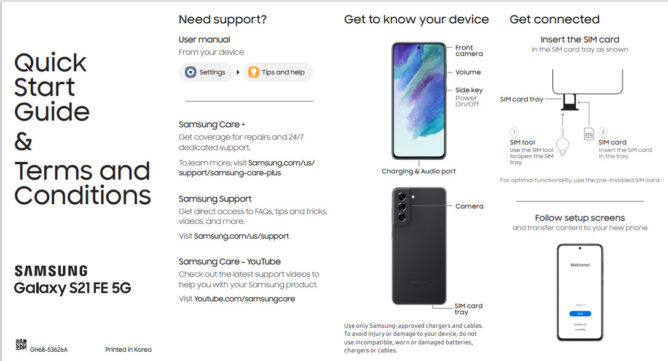 Other details we've gleaned about the S21 FE: it's using an under-display fingerprint reader like the main series, it's coming in at least four colors, and it looks like it's on the bigger side. If it follows the same formula as the popular S20 FE, it'll use the same processor as the mainline (Snapdragon 888) with some downgrades in the case, cameras, and screen to achieve a considerably lower price.

Hopefully the preparation of in-the-box materials for carrier partners means that the phone is ready to go, and we'll be hearing about it in an official capacity soon. There was a late September event for the S20 FE right around this time last year.

Google's working on letting you mirror your phone screen to Chromebooks