Chrome is surprisingly good as a tablet operating system ... at least it is now, since Google's put so much work into the interface and Android apps can run on the thing. If you're interested in checking it out, HP's new Chromebook x2 11 tablet might be right up your alley. Normally a little pricey at $599, Best Buy is offering it for just $399 today.

Four C-notes gets you an 11-inch screen, a Qualcomm Snapdragon 7c (second-gen) chipset that should be snappier than the usual MediaTek SoCs, and 8GB of RAM. Chrome OS should feel pretty darn snappy on that hardware, even with the 2160x1440 screen. The storage isn't amazing at just 64GB, but Chrome OS doesn't really need tons of storage anyway. Other charms include the detachable kickstand, Surface-style keyboard, and magnetic stylus, all in the box, and dual USB-C ports with a fingerprint reader in the power button. 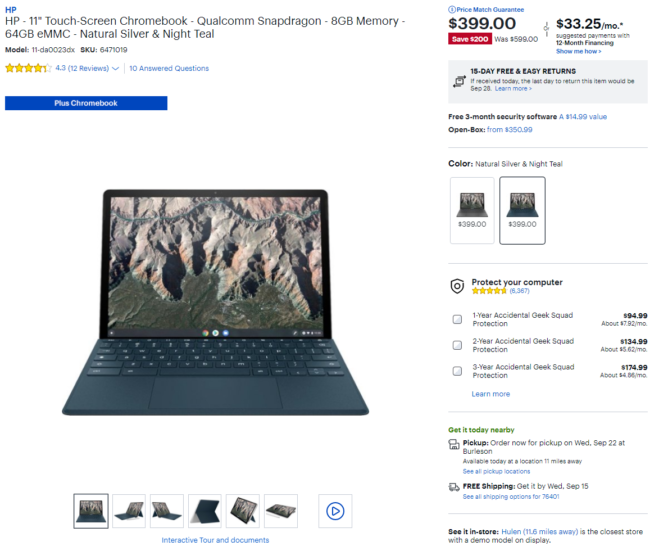 The X2 was announced only a month ago and doesn't have many reviews yet, but initial impressions are quite good. The only thing that would stop me from pulling the trigger on this deal is that Lenovo just announced an upgraded Chromebook Duet, with similar specs but a bigger OLED screen.

Unlike many Best Buy deals, this one doesn't have a ticking clock. It looks like it'll be good for a few days at least.

Epic Games may be on the hook for a whopping $3.6 million if it loses appeal against Apple