Back in the halcyon days of 2019, Google showed off "Assistant Driving Mode," a slick new interface meant to replace its aging Android Auto app on phones. After a year of delays, it finally showed up on phones last December — without that shiny new UI that made it so appealing in the first place. With Android Auto for phone screens weeks away from shutting down, Google is finally giving Assistant Driving Mode a new home screen — and it's actually pretty great.

Although this isn't a 1:1 match for what Google showed off back in 2019, it's a massive improvement over the basic list of apps that Assistant users have been stuck with for nearly a year. As spotted by 9to5Google, Assistant Driving Mode's home screen gives music suggestions, navigation results, playback controls, and shortcuts for texting and calling other users. You can tap between playback controls and recommended mixes at any time. If you've recently searched for a destination, your location history condenses all other tiles, filling the top of the screen.

The app interface is still here, accessible from the tile shortcut in the bottom-right corner of the screen. The "For You" panel suggests music and podcasts from services like Spotify, YouTube Music, and Google Podcasts. There's also a full-screen music interface if you'd rather keep navigation turned off.

Selecting "Where to?" gives suggested locations based on recent search history, and the messaging and phone shortcuts list top contacts alongside recent communication, like missed calls or unread texts.

This UI solves a big problem that drivers had found with Assistant: you had to be navigating somewhere to use it. Now, asking Google to "launch Driving Mode" brings you right to the new home screen, without the need to type in an address or location.

It's a massive improvement over the old version, but it's not perfect. It crashed once while I was testing the app, forcing me back to the phone's home screen. That's annoying enough sitting here at my desk, but it could become a real problem out on the road. Even worse: there's seemingly no way to get back to the new home screen once you've started driving somewhere. Tapping on the app grid icon from Maps has a shortcut for "Home screen," but it brings you back to your phone's home screen, with Maps in PiP mode. Driving Mode should definitely  have an "Exit" button, but labeling it as "Home screen" is needlessly confusing.

Also, forcing users to launch this mode with a voice command every time is needlessly complex. Just add a shortcut to the app drawer, Google.

Even with some bugs left to iron out, it's exciting to see Assistant Driving Mode finally get the home screen it deserves. As you can see below, the UI has come a long way since its initial unveiling in 2019. The scrollable menu has been replaced for a static display of tiles, with suggestions limited to specific menus rather than cluttering up the entire home screen. 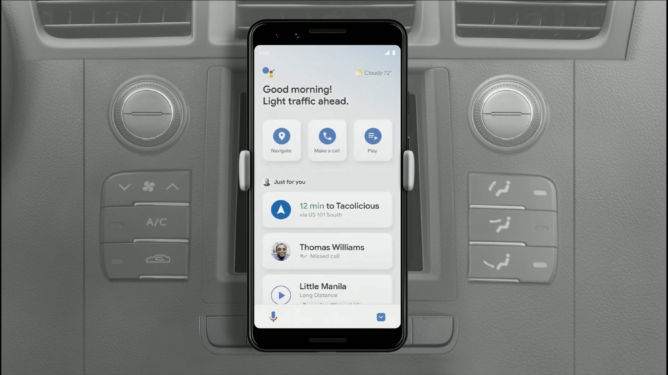 We've seen this menu on Pixel devices running both Android 11 and the Android 12 beta. As with any Google update, it might take a while before it hits your phone, though all Assistant Driving Mode users should receive this new UI soon. With Android Auto on phones going away with Android 12, it hopefully won't take too long to arrive on all devices.