Google has been working on integrating Chrome OS and Android more tightly for a while now with features like Phone Hub, Nearby Share, and Smart Lock. But the company already teased during its 2021 I/O developer conference that there was a lot more coming. We've long tracked one of these potentially upcoming features, codenamed "Eche," which we understand to be a service that will allow you to mirror your Pixel's screen right on your Chromebook, and now, more details have emerged.

9to5Google spotted a new service called "Push" (with the package name com.google.pixel.exo) in the Android 12 betas, an app that has been there since at least the first developer preview. Until now, it hasn't been possible to use or activate the app — it basically served as a stub that is supposed to be pushed live via a server-side switch at a later time. However, 9to5Google found a way to activate this Push service ahead of its proper release and found out that it adds a "Push" option to the multitasking overview on Pixel phones, next to "Screenshot," "Select," and "Share." 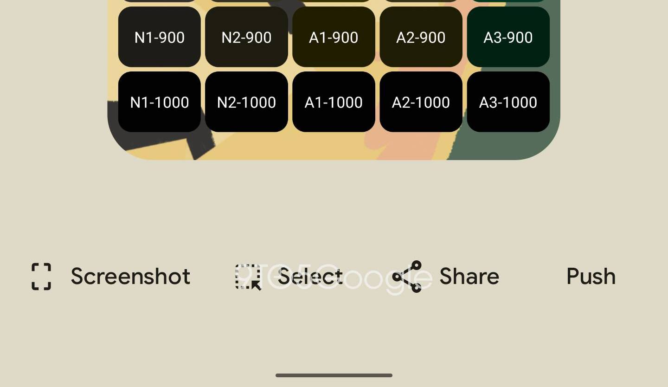 As far as we understand, the button is not quite functional yet, but two strings from its code reveal that a list with a few options is supposed to be shown:

This alone doesn't necessarily mean that you'll be able to mirror the app in question with your Chromebook, but given that Chrome OS' display server used to display Android and Linux apps is also called "Exo," things seem to come together here. There's also further evidence in the Play Services code that makes this connection more likely. A teardown references Exo and explicitly mentions that you can "use your phone’s apps directly on %1$s [named Chromebook] when you’re at home."

The home requirement seems odd at first, but it's possible that Google wants to ensure both your phone and your Chromebook are on the same network to reduce latency. There could also be security reasons.

Taken together, it looks like you'll be able to mirror an app to your Chromebook via the "Push" button in the Recents overview. The service should then allow you to control the app in question right on your Chromebook. The advantage over just using Android applications installed on Chrome OS is that you can use apps like WhatsApp or Messages without having to set up their own mirroring services on your Chromebook. The same is true for any other app or service that requires you to log in — you wouldn't have to download and set up these apps on your Chromebook anymore if you only want to use them for a minute or two every couple of months.

Judging by the Push app's package name com.google.pixel.exo (emphasis ours), the option to push your screen to your Chromebook could remain a Pixel exclusive for the foreseeable future, though. Usually, Google would have chosen another system-related name if it wanted to make it a standard feature for all Android phones. It's possible that this is still only a temporary measure, but with Google getting serious about marketing its Pixel lineup, it's very well possible that the company would like a killer standalone feature for its flagship series.