What if Facebook were actually on your face? The company already knows every little detail about you and it's currently happily sitting in your pocket everywhere you go, but I'm talking about literally having Facebook on your face. That's a nightmare you probably didn't want to have tonight, but this is no dream: it's going to be a real thing. Facebook has partnered with EssilorLuxottica, the maker of Ray-Ban glasses, to bring you the Ray-Ban Stories — a pair of glasses that are probably the coolest nightmare fuel you'll see today.

For making calls, you have built-in speakers and a microphone, as well as a companion app called Facebook View. Two front-facing cameras at each corner of the frames let users record with their glasses, while an LED indicator lets people know you're filming them. They seem pretty similar to Snap Inc's Spectacles in looks and functionality, which means they're essentially just regular Ray-Ban glasses with cameras strapped on. What we don't get is any overlay interface or a feature like augmented reality. 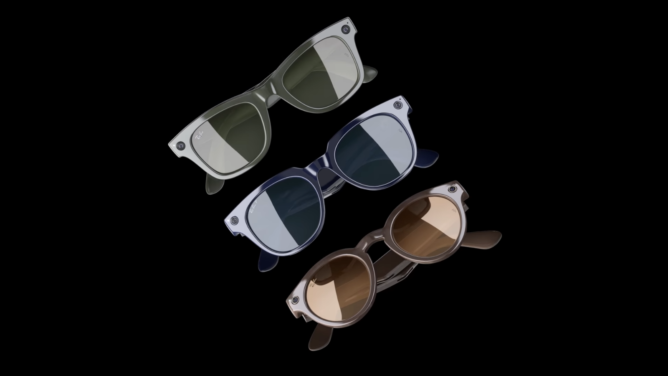 AR is still something Facebook is very much interested in, however, and while this product isn't there just yet, the company did sign a multi-year partnership with EssilorLuxottica, which means a fully-fledged AR-enabled product might just come out of it in the future. Right now, though, it just seems to be a clone of the Spectacles (even Snap is teasing AR-enabled Spectacles, although that product has yet to come to the market). They're ever-so-slightly cheaper than Snap's offering (Spectacles 3 starts at $380), and their whole shtick is that they look just like regular, non-techy Ray-Bans, so that's sure to give the product bonus points as well.

If you're worried about privacy, Facebook attempts to offer some assurances in its blog post that data and memories captured by the Ray-Ban Stories are going to be safe. According to the company, the glasses were constructed with privacy in mind from the start, with multiple built-in features to provide device owners and bystanders control and peace of mind. The company also put up a Ray-Ban Stories privacy microsite with further info on these features if you want to check it out.

Ray-Ban Stories go on sale today in the United States, the United Kingdom, Canada, Ireland, Italy, and Australia, with pricing starting at $299, which is the same as the entry-level 128GB Oculus Quest 2 VR headset. You'll also be able to find them with polarized or Transitions lenses, starting at $329 and $379, respectively. The glasses are available in five different colors and come in three different models: Wayfarer (Wayfarer L), Round, and Meteor. Material You is arriving to fancy up Google Calendar, Drive, and Meet real soon