The new Wear OS-powered Galaxy Watch4 comes in two versions: the Classic, with a physical rotating bezel for easily navigating menus, and the non-Classic, which does the same thing with a touch-sensitive edge on its round screen. Samsung's latest software update addresses the latter, as some users were complaining of scrolling issues. It's available to download right now.

The update is also going out to the Watch4 Classic, because it includes "Improved system stability and reliability." (Oddly, the update is dated August 23rd.) XDA's Zachary Wander says that it's tweaked the animations in the app drawer, too. 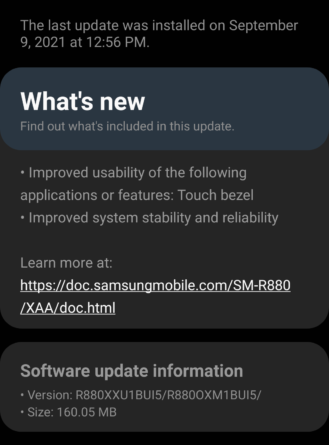 Unfortunately a persistent bug seems to remain: some notifications (notably Gmail) aren't activating the watch's vibration motor, even when set to do so. This bug has been going for several weeks, and based on a little testing, it's still there after the software bump.

The update is a hefty 160MB, so make sure your watch is connected to the local Wi-Fi before you start — that's a real pain to get over Bluetooth.

Samsung shows off its stretchiest stretchable display yet