OnePlus’s phone prices have only gone up in the past couple of years as the company gradually recalibrated its flagship sales model. However, sticking with that strategy in a price-sensitive market like India would’ve backfired. That’s the reason behind the very existence of the OnePlus 9R — an India-exclusive upper-mid-range handset that looks closer to the new 9 series models but is essentially an 8T in a new suit.

But that isn’t necessarily a bad thing. The OnePlus 8T was one of the better phones of last year, and the 9R shouldn't be any worse, especially considering it now comes with a lower starting price. However, you’ll still have to put up with OnePlus’s problematic app-based performance throttling.

Design, hardware, and what’s in the box

OnePlus has tried to make the 9R look like a part of the 9 family, especially with the redesigned camera bump, featuring more pronounced primary lenses. Apart from that detail, everything else is exactly the same as the 8T, including the dimensions. The phone isn’t particularly small, but it never felt unwieldy or difficult to use — that’s true with a case on as well. Our unit's glossy Lake Blue finish didn’t quite help with the grip or repelling fingerprints; you should ideally get the Carbon Black colorway for its matte back if using a case isn’t your thing. This phone has got a flat 1080p OLED, which is always welcome, and offers a peak refresh rate of 120Hz. The display is bright enough, colorful, and uniform, and I had no issues whatsoever during my time with the phone. Though, unlike higher-end OnePlus devices, there’s no comfort tone to automatically adjust the display temperature based on ambient lighting. Meanwhile, the under-display fingerprint scanner is fast and responsive, but that’s not the best part. The reader’s lower position on the 9 and 9 Pro turned out to be a big inconvenience for us. Thankfully, that’s not the case with the 9R, which has still got the scanner right where your thumb would naturally rest. 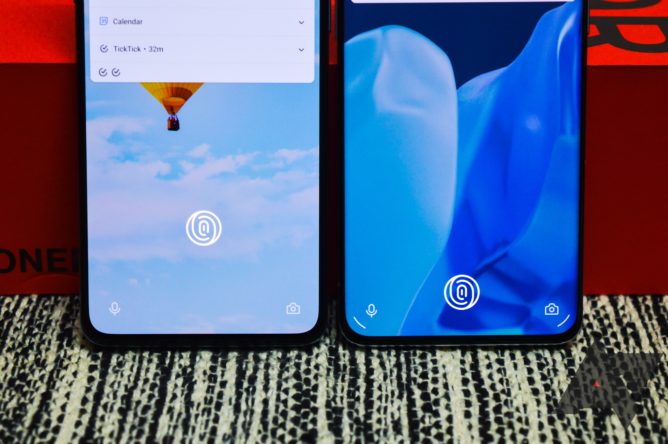 Other things that OnePlus got right are the abundantly loud and clear stereo speakers and that iconic (and pretty darn useful) alert slider. Some cheaper OP phones don't get the alert slider, which is always a disappointment. The headphone jack hasn’t made a comeback, sadly, and I think it’s time for me to give up on that for good. And if you’re wondering, the 9R isn’t IP rated, just like every unlocked phone OnePlus has ever launched. 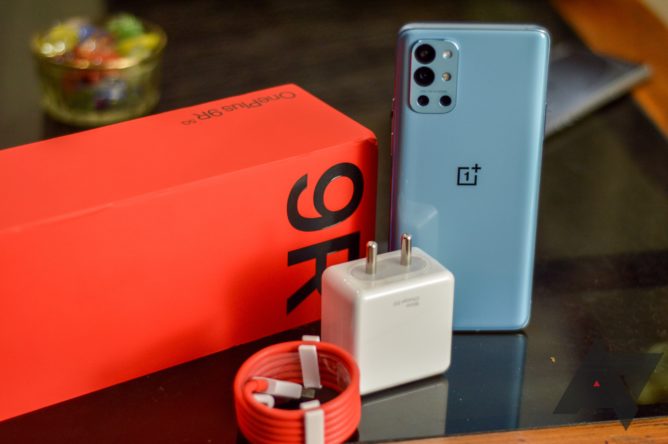 Inside the bright red box, you get the OnePlus 9R itself, its 65W charging brick, a USB Type-A to Type-C cable, a clear case with a big “Never Settle” branding, and a whole bunch of documents and stickers.

The 9R gets the OxygenOS 11 treatment with a redesigned look reminiscent of the Samsung One UI interface. The facelift may seem radical to some longtime OnePlus users, but the most significant changes are limited to first-party apps. So, even if you don't love the theme or more centered content, it's not constantly in your face. The interface feels minimal right from the setup process, even though OxygenOS has grown to be a bit pushy with all the OnePlus apps. The good thing is that you can uninstall most of the bloatware and easily switch the defaults to the apps of your choice. 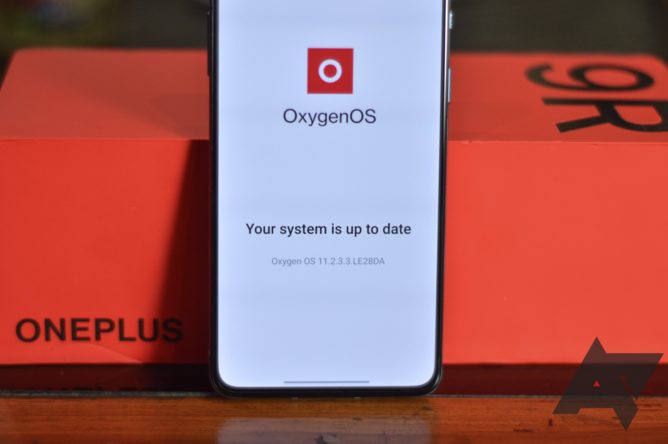 I had little to no issues with the OS freezing or app crashes, unlike what we saw on the OnePlus 9 and 9 Pro. This could be because the 9R has the guts of the 8T — the Snapdragon 870 is basically an amped-up version of the 865 — and the company has already spent quite a while optimizing its version of Android 11 for that hardware. Moreover, we’re months into the 9R’s life cycle, and any initial bugs may have already been ironed out on the latest OxygenOS version I was on.

However, there are not-so-great things that I’ve now come to expect from a OnePlus phone. For instance, after setting up the 9R, I headed into the settings and turned off battery optimization for certain essential apps. OnePlus phones are notorious for killing apps in the background, delaying or even completely blocking notifications. Unfortunately, that still hasn’t changed.

Speaking of bad things, OnePlus has confirmed that it’s targeting certain apps to throttle the CPU performance on the 9R, too, for the sake of battery life. It was indeed the case when we ran a couple of browser-based benchmarks, but the difference in the scores wasn’t as bad as it is for the Snapdragon 888-powered OnePlus 9 and 9 Pro. Having said that, everyday performance — or even while gaming — didn’t feel lacking any time, and RAM management was also on point, at least on our 12GB variant. But that’s still no excuse for keeping buyers in the dark after they’ve paid top dollar for the product.

The phone feels quite warm around the top while gaming, though it didn’t slow down. The only time it got uncomfortably warm was during the setup process, but it’s been fine outside that single incident. This could still be an issue if you're connected to mobile data or use the phone in direct sunlight for long periods, especially since the 9R is meant for India, where temperatures can easily go over 40°C.

My typical day is usually about a whole bunch of notifications, a couple of hours of music, and a few minutes of messaging with no gaming. With that kind of usage, I consistently ended up with at least 30% battery still left. And on days when I pushed the phone until the battery saver turned on, I got 6+ hours of screen-on time — which is by no means exceptional, when you consider the lengths OnePlus has gone to optimize battery life. It’s enough for my use, but if you’re always tethered to a 4G connection or use battery-hogging apps often, be prepared to do mid-day recharges.

Though that shouldn’t be an issue with the supplied 65W charger that is quite fast: It takes under 45 minutes for the battery to charge from 10% to full. This is previous-gen Warp Charge tech, so the speed isn’t as good as the 9 and 9 Pro, but it still beats the competition by a good margin. Since these charging speeds are only possible on OnePlus’s proprietary tech, you’ll have to splurge on these spendy Warp chargers if you ever want a replacement or an extra unit. 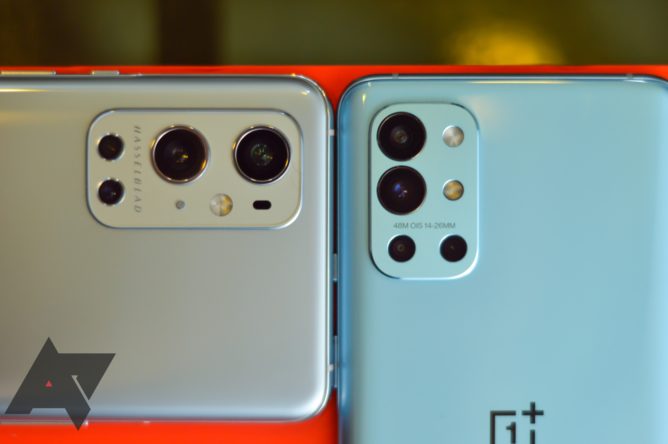 Much like everything else, the quad-camera array also hasn’t changed, so there won't be any surprises for those coming from the 8T. You still get the 48MP Sony IMX586 sensor and a 16MP ultra-wide camera, along with a 5MP macro and 2MP monochrome lens. Binned 12MP shots from the main camera come out quite good in broad daylight with on-point white balance and acceptable dynamic range. You have the option to take full-res 48MP shots, but doing that will lose the benefits of pixel binning, resulting in washed-out colors.

The images taken on the OnePlus 9R look good enough for sharing on social media, but the color reproduction is still no match for the more natural-looking tone on the 9 and 9 Pro. The 9R also often struggles to focus in low light, particularly when indoors, requiring you to set the focus manually to take decent shots with the help of OIS. The 16MP ultrawide sensor takes some nice images, but again only when there’s ample daylight, and you can actually see the dip in image quality when you shift to the ultrawide camera. Meanwhile, the remaining macro and b/w sensors are there just for the sake of increasing the camera count. All in all, the 9R has a typical mid-range phone camera system that performs well when the lighting is right and starts to struggle when the subject isn't well-lit.

OnePlus 9R
7/10
If you don’t mind the performance cap, then sure. The OnePlus 9R is one of those phones that tries to get a lot of things right without acing any of them, and that's the closest you can get to a flagship killer from OnePlus in 2021. It's the cheapest way to get into OnePlus’s ecosystem without compromising the performance front with a Nord. At just under ₹40,000, the 9R certainly isn’t the cheapest phone to house a Snapdragon 870 — there are plenty of options from Xiaomi and others that can save you at least a few thousand rupees — but what a OnePlus phone gets you is a cleaner OS along with the associated brand value.

After the performance throttling saga and the embarrassing takedown from Geekbench, user trust in OnePlus has taken a big hit. The potential change to device performance isn’t as troubling as how the company handled the whole situation. In the case of the 9R, I can confirm that you aren’t likely to notice any performance dip unless you compare some benchmark numbers as we did. I know it isn’t ideal and we have figured this into our device score. 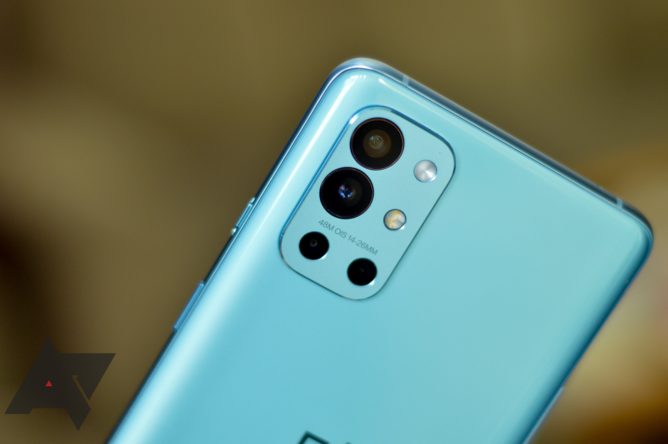 The people who should definitely avoid the 9R are camera fanatics. Its cameras are fine for more casual and occasional use but won't impress more serious photographers. If you fall into that group, you’d be better served with a slightly pricier Samsung Galaxy S20 FE or maybe the OnePlus 9. Other than the camera, the 9R doesn’t have any major issues that may keep you from picking one up.

After using the OnePlus 9R for the better part of the last two months, my view of the phone hasn’t changed much. It’s a solid performer that gets almost everything right — but that’s true only in a vacuum. Since its debut, OnePlus has come out with the Nord 2 that either matches or excels the 9R in nearly every key area, making the 9R a lot less sensible buy right now than it was at launch.

The 9R was never supposed to be a flagship phone, and it made quite a few compromises (no IP rating, wireless charging, et al.) to be available at its price point. But the problem is that OnePlus has made similar trade-offs on the Nord 2, as well. The performance gap between the two phones is nearly bridged, so the 9R has lost its competitive edge — to its own sibling, no less. 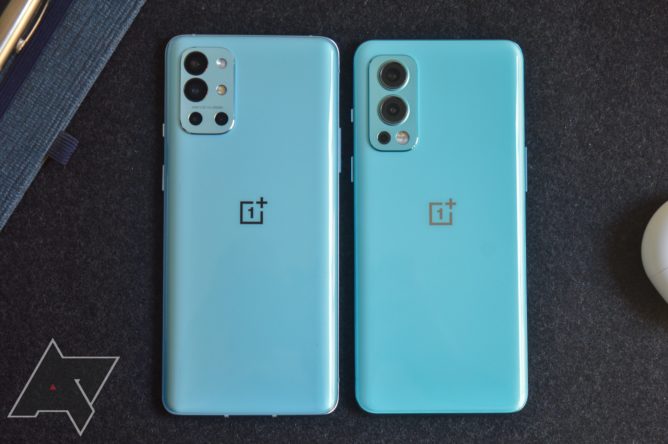 A more pressing factor here is price: I don’t think the 9R offers ₹10,000 worth of benefits over its new in-house rival. Its higher refresh rate of 120Hz and the proposed three years of software support do work in its favor, but they aren’t as compelling to me. Moreover, considering the relatively shorter device upgrade cycles in India, you’d be better off saving some cash upfront instead of relying on OnePlus’s (so far) erratic update rollouts.

We’re almost six months into the 9R’s lifecycle, and there’s buzz that a ‘T’ upgrade could be coming in the next month or two. The rumored phone is said to get a new main camera — the same one that you get on the Nord 2. That’s another reason to skip the OnePlus 9R to either wait for the sequel or pick the Nord 2 if you need a phone right away.

I know this really sucks for those who only recently bought the 9R, but that’s how it is with a brand like OnePlus that figures out its strategy along the way. As a result, we’re striking off half a mark from the 9R’s original score.