Smart home deal seekers should grab their keys and jump in the car ASAP. Some Walmart locations are selling the Wyze Cam v2 for $5-3, seemingly fire-selling their remaining inventory now that the excellent Wyze Cam v3 has been here for a while.

If you're looking for the best smart home camera, this isn't it. The new Wyze Cam v3 beats the prior model quite soundly, with much better video quality — especially in low-light circumstances. Other cameras from other vendors are also mostly better, and Assistant integration for Wyze cams is a little limited compared to things like Google's Nest camera lineup. However, you'll have a hard time beating this price, and the camera usually runs closer to $25.

Specs aren't bad though, with a 1080p sensor paired with a somewhat smallish f/2 aperture, IR night-vision, 110-degree FoV, zone detections, continuous local recording via microSD, notifications via the Wyze app, CO2/smoke alarm detection, and support for both the Assistant and Alexa. Wyze even tosses in free two-week cloud storage for 12-second alerts, so you don't have to pay for a subscription if you don't want to. 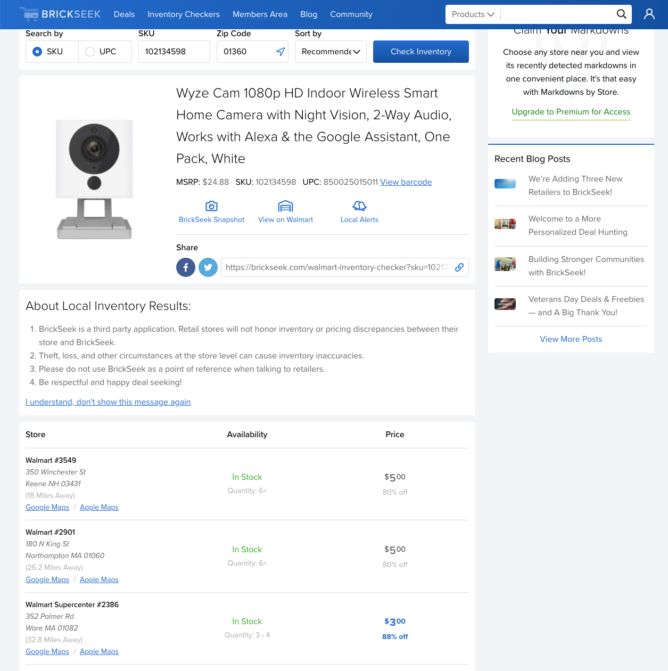 Your own availability will vary, and most of us at AP show no units in stock at our local Walmart stores over at Brickseek. Stock at stores that have it is also limited, and prices vary from $3-5. Of course, there's also the question of whether you actually want to support Walmart with your money and business, but that's an exercise best left to the reader.

This deal is in-person only, and you'll have to act fast; it's likely to sell out. We recommend that you check your local stores via Brickseek before you make the drive.

The Final Fantasy IV pixel remaster lands on Android, but it will cost you