Ahead of the shutdown of its 3G network early next year, AT&T has been prompting customers who own devices that are set to become obsolete to get new phones. It's gone so far as to offer a free if cheap replacement for those who request one. However, some subscribers who have yet to take action of any sort on this matter are receiving devices anyway and they're not the phones we were told to expect.

For those who haven't heard, AT&T will sunset its 3G grid this coming February in order to make room for further rollout of its 5G network. In addition to the obvious phones, the transition will also affect devices that can only support an older VoLTE standard which relies in part on 3G to work.

Ma Bell has been offering free replacement devices on a like-for-like platform basis for a few months. Flip phone owners have been getting newer, compliant flip phones while those with ancient iPhones were being given second-gen iPhone SE units with no strings attached, at least for a time — we hear that newer iPhone SE replacements are tied to bill credits over an AT&T Next device installment plan. On the Android side of things, we reported earlier that AT&T was offering cheap RADIANT Cores (MSRP: $70) to replace outdated devices if customers so requested one.

While some customers did make the request — and, in turn, got said device — others did not. One such customer was Android Police founder Artem Russakovskii who ended up receiving a Galaxy Note9 through no action on his own.

And he's not alone: the r/ATT subreddit has seen at least a few threads pop up with questions and comments about the replacement. Many users were confused after being notified about a shipment that neither they nor anyone else on their account had initiated and were even more puzzled once the phones landed at their doors.

It's note just Note 9s, either. One person claims to have received a Note10 and it sounds like Galaxy S9s and A11s have also been included in the mix. 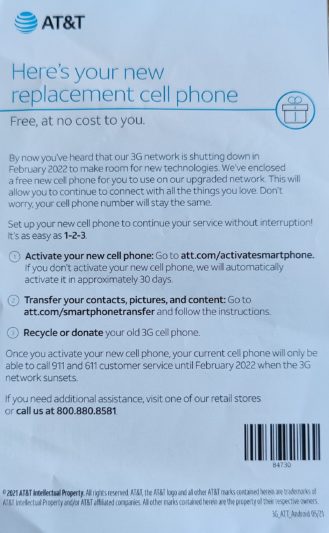 All of these devices are subject to automatic activation with the customer's current phone number and service within 30 days of shipment, making their current phones effectively useless for mobile communication. Those who have called into customer service to prevent this switch have had it happen to them anyways.

We have requested comments addressing the device replacement program from AT&T and have not received a response as of press time.

An AT&T spokesperson released this statement to us:

We have not changed our plans to replace 3G network-dependent devices. However, inventory constraints mean we sometimes must find substitutes for some devices.

That would explain the variety of phones reportedly being given out though the reply does not directly answer why the company is initiating these shipments at its own behest. At the very least, it confirms that these are free phones and that AT&T wireless customers shouldn't be worried about where they came from or why they came. They are also encouraged to contact customer support if they would like to delay activating their new device though results may vary as has been reported above.