Many of us have been eagerly anticipating One UI 4, which will show us Samsung's take on Android 12. The company accidentally announced the beta early in July before pulling it and saying that we'd need to wait until September for more details. Now things are finally moving ahead, as the original announcement is reposted with more information.

As spotted by SamMobile, Samsung's beta operation manager has posted the One UI 4 beta announcement on the South Korean forums, confirming that the Galaxy S12 series should see the update sometime in September. 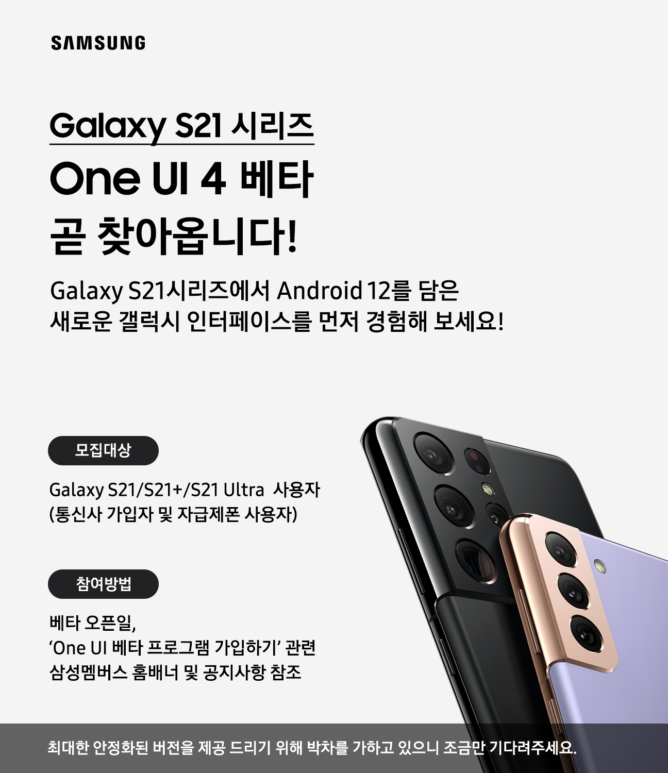 The announcement also includes the same promo image that was mistakenly posted in July. The general gist from this image is that the beta will be available for the S21 series regardless of whether it's unlocked or a carrier model. You'll need to open the Samsung Members app, look for the One UI 4 beta banner, and enroll to participate.

Samsung hasn't said which countries will get the beta, but usually, it hits South Korea first, with the US following a few days later and a European release one or two weeks after that. Until that rollout begins, it'll be a waiting game of closing and reopening the Samsung Members app several times an hour until we finally get what we want. Or am I the only one who does that?

One UI 4 is expected to bring a major design overhaul to Samsung's software experience, possibly mimicking Google's Material You color theme, and under the hood changes to improve performance and battery life. We'll know more once it's available, and of course, we'll be covering everything new in the next version of One UI.

Bose steps up to Sony with improved QuietComfort 45 ANC headphones