You don't need to break the bank for a pair of true wireless earbuds with active noise cancellation. Hell, you probably won't even need a whole Benjamin. Aukey's Beyond ANC Hybrid earbuds, otherwise known as the EP-N5, only cost $59 most days and can be found for way less sometimes. But can your ears live with them? Check out our appended update below.

The EP-N5 are stemmed earbuds — the same general shape as Apple's AirPods. They can be controlled by touch capacitors on the top half of either stem and are charged via Pogo pins at the end of the stem. The buds slot into a charging case featuring a glossy, plastic interior and a matte, rounded exterior, all of it in black. The buds rest in the case with the stems in silos as opposed to laying flat in a recess, which can make it a bit hard to keep clean. 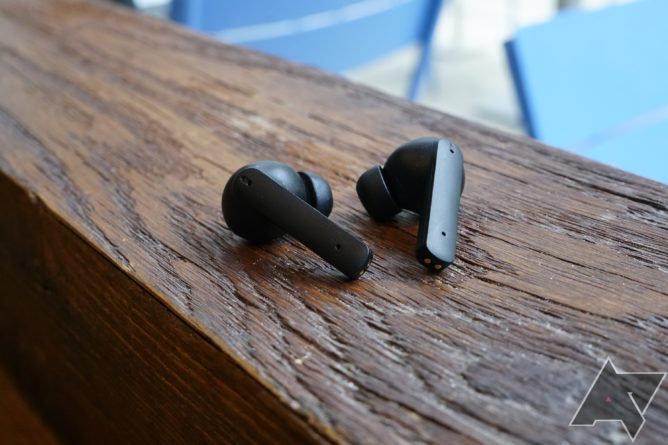 TWEs are already fiddly affairs, but the dark look combined with the port design makes it downright annoying — I find myself poking around for the silos more often than I'd like. 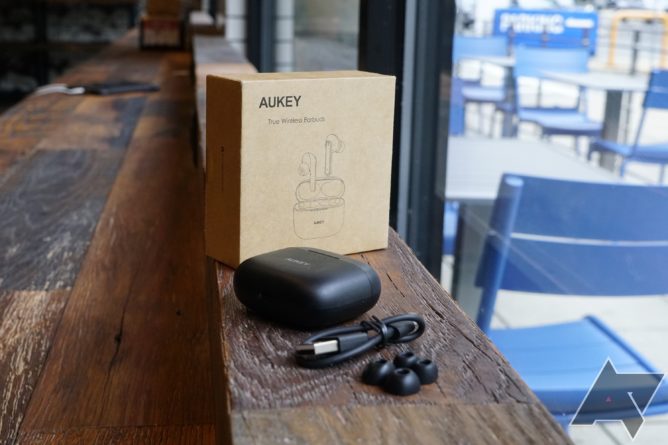 Filling out the box, you've got a tiny full USB to USB-C cable and a bag of the common large and small bud tips — the mediums are installed by default. I'm far from alone in finding that these practically universal tips (not dinging Aukey here) aren't great fits, so it's important to note that if you're looking to use alternative buds that they have to be tips only — I tried a two-part solution that includes a base layer with a tip and could not get both to lodge in place.

Immediately out of the case, the earbuds are eager to pair with something, so that makes them easy to find on your device. You can use both earbuds or just the right one if you're about the call center life. No support for Bluetooth multipoint or similar features here, so they only connect to one device at a time. 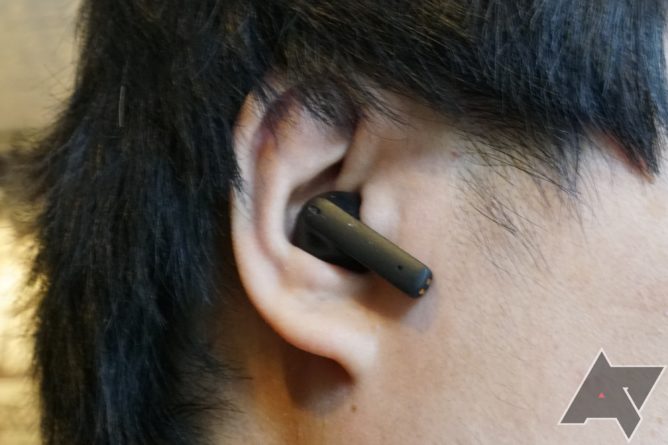 Tapping either bud once will pause, play, or answer a call, obviously depending on the situation. Double-tapping the left bud skips backward while doing the same on the right side goes forward. Holding a finger on either bud for two seconds will end or reject a phone call or toggle ANC on (one beep) or off (two beeps). Double- and triple-tap recognition for me was extremely hit-and-miss, even if I was very deliberate about how I was tapping. It wasn't fun scooching the buds around, either, without accidentally touching the stem and triggering a pause or play.

The noise cancellation is said to make a 28dB dent in ambient noise and — without metering the output coming from my earbuds — Aukey seems to have hit that target, crushing low rumbles like from your air conditioner or car. It's about as good as I can hope for with $60 TWEs.

With the good comes the bad, however. The lack of aptX bums me out a little, but it's expected for a budget item. There's also the occasional glitch that disrupts the stereo sync between the buds — it resolves with a couple pause/play cycles and sometimes it just happens on its own, but it's a bother nonetheless.

Most damning, I've found that the ANC stops working after a while. I can't pinpoint when exactly that is, but between adjusting the buds and taking them off and putting them back on, it's usually around half an hour. When I turn ANC on and off and it makes no discernible difference, that's when I know I've got to reset. 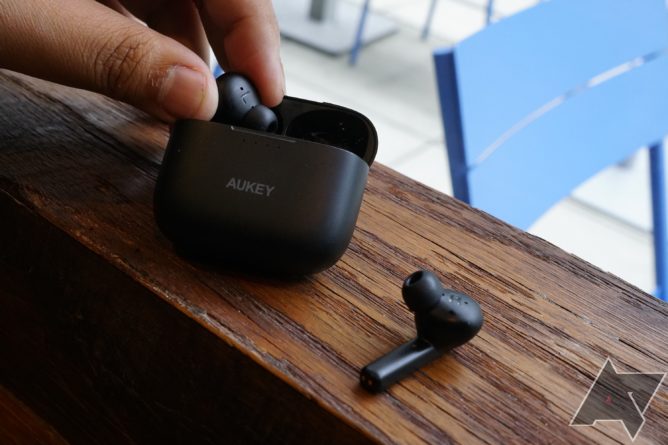 Each bud has two mics for voice pickup and phasing out background noise. On calls, my voice was deemed satisfactorily clear while standing near a busy, breezy intersection, but was overpowered at a cafe with music and conversations in the background at moderate levels.

It was a bit difficult tracking the power situation with these buds. I wore the EP-N5s for four extended sessions between 2.5 and 5 hours over the course of a week, most of the time with ANC on. They automatically turn off when put into the case, so that's where they stayed, though I didn't plug the case in at night for the sake of testing. In all, I got around 15 hours of podcasts, music, and calls total before draining the whole kit.

I also tried getting at least one non-ANC marathon session and got about 7 hours. That matches what Aukey advertises for maximum non-ANC battery life. With ANC on, the top comes down to 4.5 hours. Between the buds and the case, I should've gotten 22 hours for the week, but I suppose that with the case constantly topping off the buds' charge that there would be significant loss there.

(see update below). With pretty basic Bluetooth sound, these earbuds are best suited for short sessions like a Zoom call in a quiet room, running a couple of miles, or, if you're still doing one of them in this post-pandemic world, a commute. They cut out most of our worldly humdrum though the ANC will occasionally crap out for reasons unknown. But if you leave them on the bus, it's not the end of the world.

I would definitely check for a lower price than the $60 MSRP as these have been on the market for about a year. They recently went for about $20 on sale. But at the end of the day, I think they'll do the job of giving you everything you want to listen to just fine.

Aukey is selling these earbuds exclusively through its site after being delisted from Amazon back in May, though technically they’re no longer known as the EP-N5. Instead, they have the radically general title “Hybrid Active Noise Cancelation (sic) Wireless Earbuds.” They still cost $60 and it doesn’t seem like they’re on sale often, if at all.

It’s been tough for me to keep wearing these and a damn shame, too. The tips keep slipping out of my ear canals which prevents a good seal and prevents the ANC from shining. But not all ears are shaped alike and there are aids you can purchase, so I feel like I need to spare them that benefit of doubt.

That said, the touch controls remain the biggest thorn in the user experience as their touch-and-go nature (literally) means I’ve been accidentally turning on ANC, turning off my music, or, if I’m frustrated enough, tapping them way too many times to make Google Assistant come on. It’s annoyed me to the point where I’d say I wouldn’t pay any amount of money to essentially finger-nanny my earbuds.