After what feels like an eternity of Google ignoring wearables entirely, the first smartwatches with the new-and-improved Wear OS are finally here. The brainchild of collaboration between Google and Samsung, the Galaxy Watch4 comes in two flavors: regular and Classic. I've been using the latter for a while now, and despite a number of frustrating flaws, I can't help but kind of love it. If this watch is any indication of things to come, we might have a reason to get excited about Wear OS again. 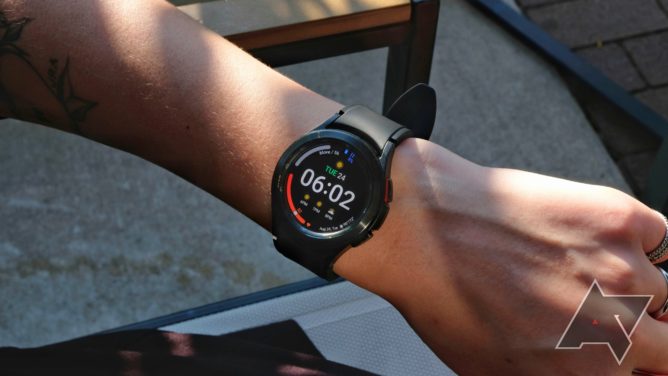 The Watch4 Classic is hardly a radical departure from previous Samsung wearables: it's a pretty traditional-looking watch with two buttons on the right edge and that familiar and well-loved rotating bezel encircling its display. Its case is stainless steel (fancy!), and it comes in two sizes: 42 millimeters with a 1.2-inch screen, or 46 millimeters with a 1.4-inch screen.

Both sizes come in a Wi-Fi/Bluetooth version as well as an LTE-connected variety, and each is available in either black or silver. The standard Watch4 also comes in pink or green, so it would've been nice to see more color options here, too — this thing would look great in a bronze finish with a green band.

The rotating bezel is sort of the Watch4 Classic's entire gimmick. That, along with its more conservative styling and steel construction, is what makes it Classic as opposed to the normal Watch4, which is smaller, sleeker, made of aluminum, and bereft of a physical rotating bezel (its bezel is touch-sensitive to mimic the functionality, but that's just not the same). I'm still not entirely convinced those upgrades are worth the hefty $100 upcharge, but I would definitely miss the bezel after using it. Its rotation comes with a delicate mechanical clicking that sounds to me like a tiny socket wrench, and it's so satisfying. Sometimes I fiddle with it just for fun. 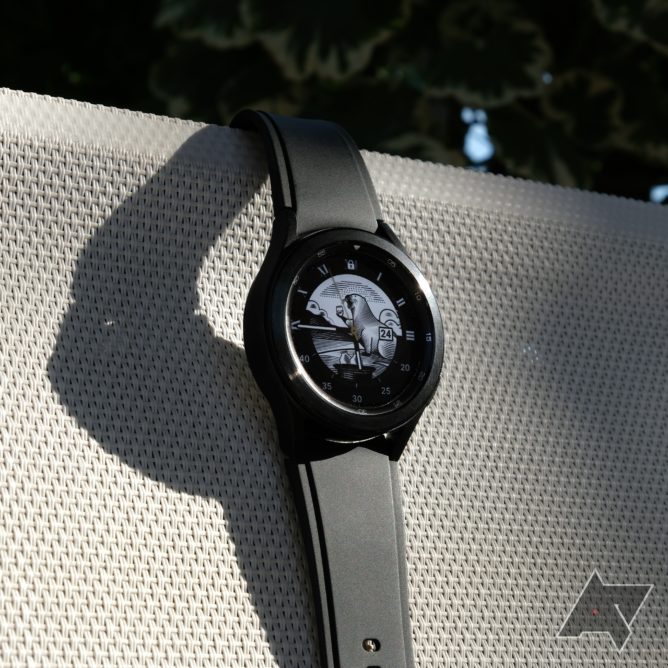 Far and away my favorite watch face on the Watch4 Classic.

More importantly, though, the screen inside that bezel is utterly great. The 42-millimeter model I'm using has a 1.2-inch OLED display with a resolution of 396 by 396, and it's got great viewing angles and vibrant colors. It also gets plenty bright enough to see in even the harshest sunlight, and its 60Hz refresh rate looks excellent next to the myriad watches that are stuck at 30.

I'm not big on large watches, and as a man with what I'd call normal-size wrists (that's not my arm in the photos, by the way), I find the smaller Watch4 Classic and the included small/medium band to be very comfortable — although I'm within a couple notches of needing a medium/large, which isn't in the box here. Bands attach by standard spring pins, though, so any 20-millimeter band you may have around ought to slot right in without much hassle.

The watch can be used to take hands-free calls, and while I can see that being helpful in a pinch, in practice, it feels pretty awkward. I don't think I'll have much use for the built-in mic and a speaker until Google Assistant support eventually lands (more on that later).

In the box, there's the watch, its band, some literature, and a little five-watt magnetic charger.

There's been a lot of hay made about Wear OS's big refresh, which is debuting on the Watch4 line, but this is still a very Samsung experience. The software on the whole looks and behaves a lot like Samsung's Tizen interface, but being Wear OS under One UI confers the benefit of full Play Store access. I'm personally more familiar with the old Wear OS than I am Tizen, but I had no trouble adjusting. 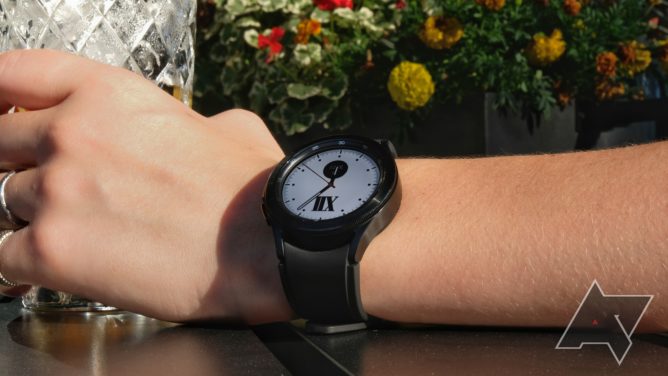 Navigating the new Wear-Tizen hybrid shouldn't be too difficult for anybody who's used either OS. Notifications live to the left of your home screen; quick settings above; app drawer below; and app tiles to the right. Twisting the bezel counterclockwise from the home screen will scroll through notifications, and clockwise, tiles. In views with vertically scrolling content, clockwise twists scroll down and vice versa. The bezel is an intuitive (and even fun) way to get around the watch, but it does occasionally become unresponsive, and I could never figure out why. Still, that probably happened to me less than once a day and it never failed to resolve itself within a few seconds, so it's only an issue in the academic sense. Play Store access means most of the apps you're used to from your Wear OS watch are available here — including big gets from Google like Fit, Maps, and Keep. The Watch4 series even got a YouTube Music app before other Wear OS devices. I say "most of the apps you're used to," though, because there are currently notable exceptions. The Google Assistant is absent from these new watches, and while there is a Google Pay app, it's broken for me — I haven't been able to set up any payment methods, even ones that are already enabled for contactless payments on my phone. (There are Samsung alternatives, naturally, in Bixby and Samsung Pay, but ew.)

It's worth noting here that other Galaxy Watch4 users are reporting Google Pay is functional. That's not currently the case for me; trying to add any payment method still results in an error. We'll update this review if anything changes.

I asked Samsung directly about Assistant and Pay, and a representative told me that the company is "working closely with Google to bring those popular Google services to Galaxy Watch4 series." Samsung's become something of a software support legend recently, so I don't doubt the apps really are coming eventually, but that doesn't help a whole lot in the immediate future. 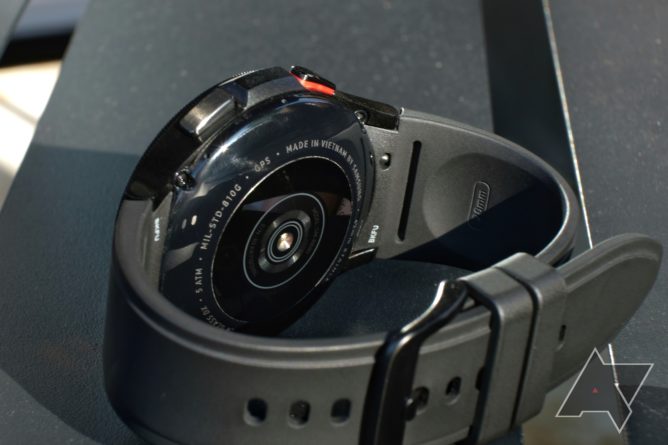 A lot of the built-in watch faces are really fun; my favorite features a line drawing of a happy little otter. They're also customizable: practically all of them have multiple themes and color options, and most complications (that is to say, the tiny little widgets that show stuff like your step count or the weather) can be swapped out to better suit your needs.

On a fundamental level, the Watch4 Classic is great at regular smartwatch stuff. It delivers notifications, of course, and it'll track your activity, your sleep (including overnight blood oxygen saturation), and even your body composition by way of bioelectrical impedance sensors embedded in its two buttons — my readings there were consistent with what my Fitbit scale reports, for what that's worth. By default, it only takes your pulse once every 10 minutes, but there's also a continuous setting, if you don't mind the battery hit.

Normal watch stuff is managed through the Galaxy Wearable app.

You can technically take an EKG scan using either Watch4 model, too, but for reasons I can't begin to guess, doing so currently requires the watch be paired with a Samsung-branded phone. While activity tracking, sleep tracking, and body comp data are all stored in Samsung Health, which you can install on any old Android device, EKGs require the Samsung Health Monitor app, which is only available through the Galaxy Store. The hardware is also capable of measuring blood pressure, but that functionality isn't available in the US. I'm not personally bothered by any of this, and there are workarounds, but the limitations are still goofy and could reasonably turn off potential buyers who don't own Samsung phones.

There's a brand new Samsung-built Exynos W920 chipset inside every Watch4 model, paired with a luxurious gig and a half of RAM. Those comparatively beefy specs driving the Watch4 Classic's lovely 60Hz display make for an incredibly smooth smartwatch experience. Even on well-appointed traditional Wear OS watches, the UI can frequently feel a little stiff — but I'm yet to experience that with the Watch4 Classic. Tooling around the UI, opening apps, and even replying to texts with a postage stamp-size T9 keypad all feels quick in a way I'm not used to with Android watches. If performance here is predictive of how Wear OS devices as a whole will feel going forward, I'm sincerely excited.

You can use Google Fit for activity tracking, but sleep and body composition data require Samsung Health.

You can expect the Watch4 Classic to last you about one full day on a charge with the always-on display active — the smaller model, at least. Samsung is talking up 40-hour battery life on these watches, and while that might be feasible on the 46-millimeter version, the 42-millimeter, with its tiny 247 milliamp-hour cell, regularly conks out right around 24 hours for me. That's fine, but it's also 40 percent shy of Samsung's advertised figure, and it doesn't inspire much confidence in the thing's longevity. Will I even be able to wear this watch to bed in a year?

Samsung Galaxy Watch4 Classic
8/10
If you want a competent smartwatch for your Android phone and you have no compunction about dropping extra cash for nice-to-haves like that slick rotating bezel, yes. I think the non-Classic Watch4 is easier to recommend to more people; it's functionally identical to the Classic model and it costs $100 less. The Watch4 Classic's higher-end materials and bezel really do add value, though, and if you want the best and have the budget, it's a great option.

There's no denying Samsung's new watches work best with Samsung's own phones: EKGs are officially unavailable on phones from other manufacturers, and using services like Bixby, Samsung Health, and Samsung Pay on non-Samsung phones requires downloading additional apps. But using the Watch4 Classic with a Pixel 5, the Samsung-mandated concessions hardly bothered me, and the watch is so darn nice to use, they feel worth it.

It's harder to overlook the absence of the Google Assistant and the non-functionality of Google Pay, but I believe Samsung will get them on the Watch4 series sooner than later, and I'm willing to go without them temporarily for an experience that's otherwise so good. 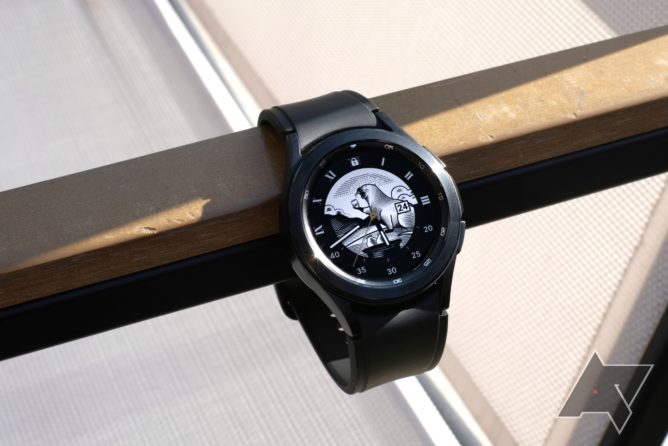