Samsung's folding phones are proving to be more popular than you might expect. With sales growing and plenty of our readers seemingly snapping up the phones, some of you might be pondering what sort of case to get for your new $1,000-1,700 smartphone, and I'd recommend you give one of Samsung's first-party cases a try, for a few key reasons. 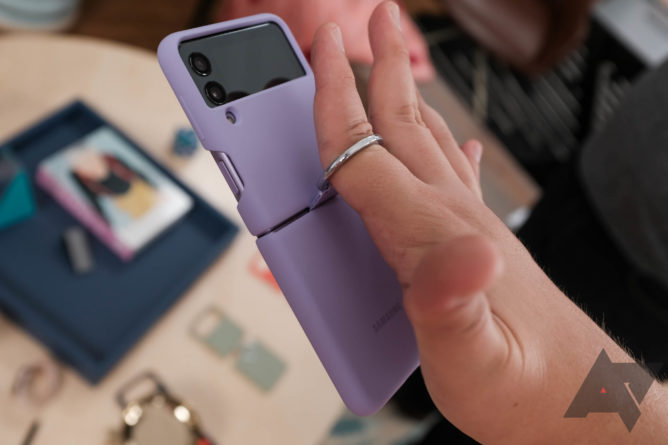 If you opted for the smaller and cheaper Z Flip3, Samsung's $40 awkwardly named Silicone Cover with Ring is worth a look, especially if you're worried you might drop your phone or you're the sort of person that has used things like PopSockets for stability. Samsung's cases come in colors that complement the colorways of the phone itself, and the materials and build quality are fine, but it's the design that I find most useful. That extra ring on the back is attached via a strap to both halves of the case, and it's positioned in almost precisely the right spot to slip a finger through the ring when you're using it for stabilization. Unless you flip it upside down, that makes it basically impossible to drop. Admittedly, I do sometimes find the ring to be a bit too big, and there's this impetus to let my grip slide further up the back of the phone, which can make the whole setup harder to use, but if you resist that urge, it's a pretty fantastic design. If you prefer style to functionality, odds are that Samsung's aptly named Leather Cover will be the only wraparound leather case for the phone. I do wish the leather wrapped around the front lip of the case, rather than resorting to edge paint. The paint can look a little irregular and messy in the right light, and it's also highlighted by being right next to the display when you're using the phone. Some of the corners were also a little bit more puckered than I'd have liked to see. But the quality of materials is otherwise very nice.

I'm a bit of a leather enthusiast and hobbyist, and based on the grain pattern on my case, Samsung didn't opt for anything I would consider gross like grain-corrected leather — or they did a good job with it if they did. It would have been cool if the volume button was metal like Samsung did on some of its older cases, but the plastic isn't bad, and the cutout is the right size to comfortably hit the fingerprint sensor both screen-open and closed.

Samsung also makes a $40 case with a strap for the Z Flip3, and though I only got to play with that one for a few minutes at Samsung's hands-on event earlier this month, I wasn't as big of a fan of the design and found the version with the ring more useful. There's also a $70 Aramid Cover (read: carbon fiber) case that looks pretty snazzy, but I haven't had the pleasure. The first-party selection for the bigger Z Fold3 is more limited, but you'll still probably want to pick up the somewhat expensive $80 Z Fold3 Flip Cover for two key reasons: One, it comes with the Fold Edition S Pen, and you're going to want that; Two, the case itself has a convenient receptacle for that pen built right in, making it easier to take with you and making it less likely that you'll misplace or lose it. If for some reason, you don't like the S Pen holder, that part can also slide off entirely.

I'm a little less enthusiastic about the design of the Z Fold3's Flip Cover, but I also can't see a better way to protect the phone while ensuring full functionality. Unlike the leather case for the Z Flip3, the Flip Cover attaches to only the back folding half of the phone with a plastic tray. A sort of leather folio adhered to that wraps around to the front half, but it has no mechanism to stay securely attached. The design makes sense in that you need to flip that cover open to use the exterior-facing display, but a magnet or something to more securely close the flapping loose section of the case to the exterior display would have been handy, at least.

The case comes in any color you want, so long as it's black.

I'm actually pretty picky when it comes to cases for my phones. Often, I'd rather take a phone outside naked than dress it up in something I don't like. While Samsung's cases aren't the sort of super-chunky, ridiculously protective designs some people prefer, that's never been my style, and I don't abuse my phones hard enough to need half a centimeter of protective rubber.

If, like me, you prefer something a little more svelte and sophisticated for your Z Flip3 or Z Fold3, some of Samsung's first-party cases are worth a serious look.