OnePlus is quickly becoming a veteran in the true wireless earbud market. With last year's release of the original Buds, followed shortly thereafter by the budget-oriented Buds Z, it's safe to say that OnePlus has had opportunities to work out some of the bugs. And so enters the OnePlus Buds Pro, a set of ANC-enabled true wireless buds that features plenty of high-end capabilities and a similarly higher price tag. 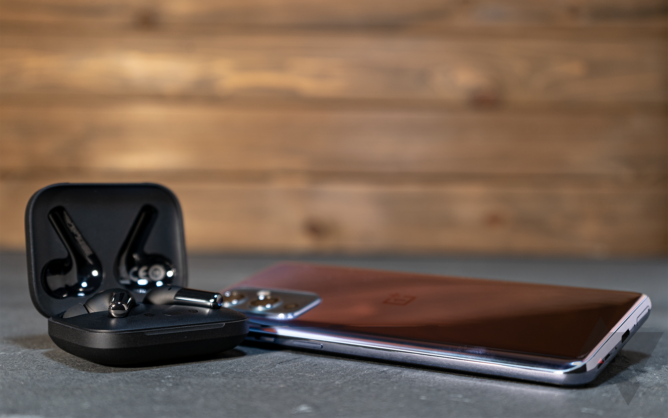 OnePlus opted for a flat, compact-style case design for the Buds Pro. It's small and easy to pocket, though you can feel a bit of heft from the battery inside. The case and buds are available in either matte black or glossy white. I received the black version, which has a faint texture on the case, except for the OnePlus name embossed in glossy lettering on the lid. You'll also find a USB-C port on the back edge for charging. A magnet holds the lid closed and offers just the right amount of resistance to prevent it from popping open from a drop; however, I found the case is a bit finicky to open when you want to. The rounded case doesn't allow for much surface area on the lid's edges, so the best place to grip is a shallow groove on the front.

The body and silicone tips of the buds are color-matched to the case, but both versions incorporate a chrome stick extending downward. This look has more visual interest than the colored blobs that are Samsung's Buds 2 or Google's Pixel Buds — which almost look like hearing aids — but it's not quite as over-the-top as the Nothing ear (1). I also want to commend OnePlus for having absolutely zero branding on the buds. Too many companies want their customers to be a billboard, but this design shows restraint.

For my ears, the Buds Pro fit tightly and seal quite well. Even with noise canceling disabled, they block quite a bit of sound. For short-term wear, I found them comfortable, but I do get some ear fatigue after about 20 minutes. It didn't get noticeably worse after another hour or two, but I think they're just slightly too large for my ears. But with that said, there's no way they're falling out, even during very active workouts.

The chrome sticks aren't just cosmetic or an excuse to fit in longer antennas, they're also used for controls. Unlike most buds that trigger functions through a touch-sensitive surface on the back, OnePlus asks you to squeeze the sticks to control music, switch modes, or activate Assistant. This avoids accidentally triggering something when you brush your ear, and I generally like it; but it's a bit finicky if you don't squeeze the right spot, and I still had accidental clicks while inserting or removing the buds. Squeezing and releasing is also a longer action than merely tapping, which makes the buds feel a little less responsive.

OnePlus always goes with simple, but nicely packaged products. Included in the box is just the case with buds inside, additional silicone tips (S, M, and L), a very short USB A-to-C cable, and a couple small booklets. 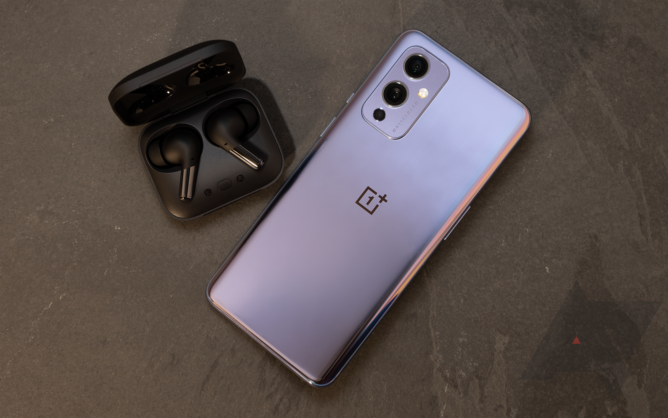 Purely in terms of audio quality, the Buds Pro are great. Audio is clear and sharp, there's no noticeable muddiness, and some frequencies only drop out at the very lowest volume levels. However, the audio profile is a different story, and it won't be for everybody.

The highs and mids are beautifully balanced and come through nicely, lending to some very clean vocals. But there's a lot of color coming from the pair of 11mm dynamic drivers, resulting in bass response that can be overpowering on some music. It only really kicks in at higher volume, and since I barely even noticed anything for the first day of listening, I doubt this will impact everybody equally. It's just hard to ignore once you've heard it.

Using the Buds Pro for phone calls is a good experience. Nobody complained about the quality, and I had no trouble hearing the other side clearly. OnePlus claims to have AI Wind Noise Reduction, but there hasn't been enough wind for me to test this during a call.

ANC is available with three levels: faint, smart, and extreme. While the faint and extreme settings apply 15dB and 40dB of cancellation respectively, OnePlus is marketing the middle option as Smart Adaptive Noise Cancellation. It's supposed to automatically adjust the ANC level based on the environment, and it does technically work, but I could rarely tell a difference between smart and extreme. Nevertheless, it works great for low-frequency noise like fans, muting them almost entirely. High pitch frequencies still slip through, but that's fairly common. You can't silence the whole world with these, but they'll let you effectively turn down the volume. There's also a transparency mode if you want to hear everything through the seal of the buds, and it may actually amplify sound a bit like a hearing aid. Oddly, there's no setting to raise or lower this volume.

Battery life has been great, perhaps better than the 5 hours with ANC, and 7-hours without that OnePlus claims. After about 3-4 hour sessions with ANC turned on and music playing, I never saw the buds below 50%. I think most people will be done wearing them before the battery dies, and then they'll naturally go back in the case to recharge.

You really don't need an app with these earbuds, but if you want access to a couple of extra features like battery indicators for each bud, visual control over some modes, and loading firmware updates, you may want to install one. However, there are two apps to choose from. For most people, it's the HeyMelody app, found under the HeyTap developer account. But for anybody with a OnePlus 6 or newer, it's the aptly named OnePlus Buds app. This one integrates with the Bluetooth settings of a OnePlus phone, which makes sense, but it means you have to tap through more menus to change any settings. With all of that said, you probably won't use the app much after the first day or two. And unlike the Galaxy Buds 2, there's an app for iOS, too. OnePlus has included Zen Mode in the Buds Pro, activated with a 3-second pinch. When it's on, the buds play relaxing sounds of nature and background music. You can use the app to pick which background should play, and it takes just about a minute to download and install to the buds. 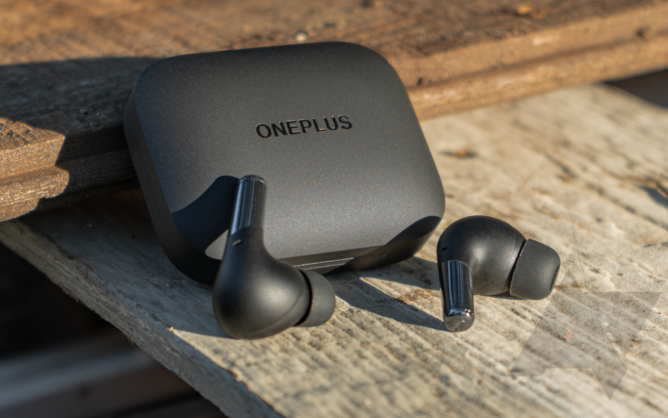 Yes. There are things to nitpick, but the overall experience of the OnePlus Buds Pro is really good. These are easily up to the standard of a premium product and they're priced reasonably for what they bring to the table. Yet, there's still room for improvement with the ANC and software.

The only potential deal-breaker is the heavy bass response and lack of EQ settings, but your listening preferences will determine if that matters. If you like Beats headphones, you're probably going to like the OnePlus Buds Pro. And you may not even notice it if you're not turning up the volume too high.

Spotify finally gets around to adding download support for Wear OS