Samsung got into the true wireless earbud game early on, but its Icon-branded buds were unreliable and had terrible battery life. The Galaxy Buds line has been far superior, and Samsung has only beefed up its true wireless credentials over time. Almost every Unpacked event has featured a new pair of Samsung earbuds, and the most recent one was no exception. Alongside the new foldables, Samsung unveiled the $150 Galaxy Buds2.

These earbuds don't try to compete with the Galaxy Buds Pro—they're Samsung's new entry-level offering, but you still get high-end features like noise-canceling and wireless charging. They sound pretty good, too. It's hard to find fault with the Buds2, in all honesty, but they do work best with Samsung phones. Once they start to appear on sale, it's going to be hard to pass them up, especially if you've got a Samsung phone.

With the charging case closed, you'd be hard-pressed to tell the difference between Samsung's various earbuds. The Galaxy Buds Live, Buds Pro, and Buds2 all have the same rounded squircle case, a departure from the pill-shaped cases of old. There's a USB-C port on the back for charging, and you can set the case on a Qi wireless charger as well. 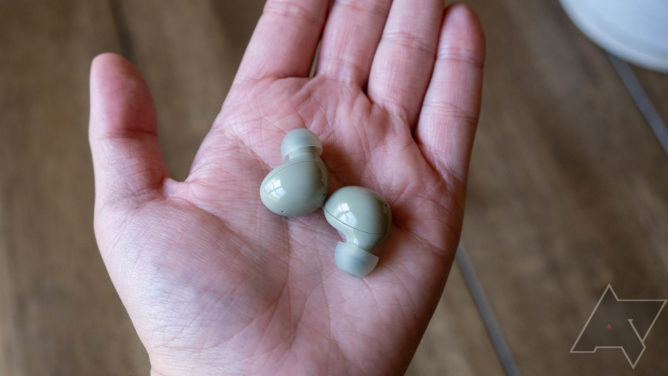 All the Buds2 color options have the same glossy white exterior. I prefer the matte texture of the Buds Pro case, which doesn't get as greasy and smudged as the Buds2 case. However, it's better than a darker color—the white plastic hides the smudges better. When you flip the lid, you get a nice punch of color, provided you didn't get the white buds. Our review unit is olive, but you can also get black, lavender, and boring white (that's not the name of the color but rather a personal judgment). While the Buds2 are water-resistant, they are only rated IPX2, so you can't expect to submerge them, but they should be fine for working out. 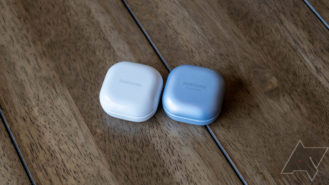 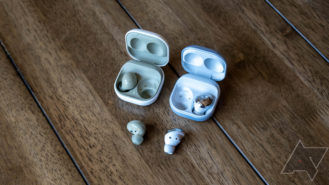 The Buds2 (white/olive) vs. the Buds Pro (silver/white)

No matter which color you choose, the buds have the same glossy finish. They're also tiny—Samsung says the Buds2 are 15% smaller and 20% lighter than the original Galaxy Buds. They almost disappear in your ears. You can barely see them from the front, and even from the side, they don't stand out. The curvy housing isn't quite as comfortable as the Buds Live, but I wouldn't expect that. The Buds2 have an in-ear design, and they feel more stable in my ears than the Buds Pro. I would chalk that up to the smaller size, lower weight, and the shape, which makes contact with more of my ear than the Buds Pro. 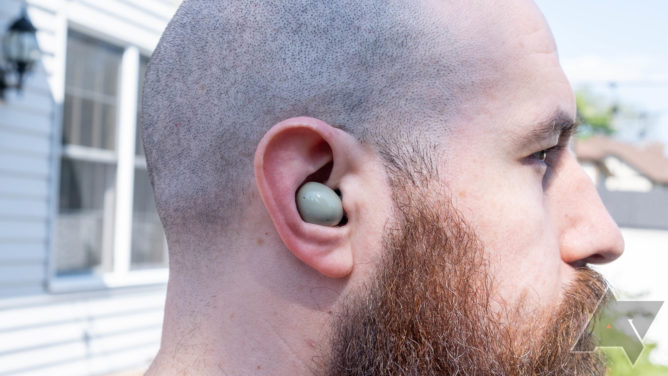 The exterior surface of the buds serves as the touchpad for controlling playback. The setup is pretty simple: tap for play/pause, double-tap for skip, and triple-tap for back (note: this is after toggling on all the defaults). I haven't had any issue getting taps to register when I want them to, but it's difficult to adjust or remove the buds without also triggering taps. I regularly get a double tap when I take one of the earbuds out.

The Buds2 come with three sizes of silicone ear tips. I've found the medium ones to be the best fit, but they seem slightly larger than average for the "middle" option. You also get a USB A-to-C cable in the box but no wall adapter.

The number one question we need to address for any set of earbuds is: how do they sound? In this case, they sound very good. I would wager that unless you're listening to a high-quality audio source, the Buds2 should be good enough for almost everyone. The audio is surprisingly close to the Buds Pro, but it lacks some of the depth and thump of the more expensive buds. The default EQ is very flat, but you can tweak it in the Samsung Wearables app to make the audio sound a bit richer.

Bluetooth is never a perfect experience, but I've had no notable issues with the Buds2 connectivity. They have stayed in sync and connected to my phone even when I leave it sitting on my desk as I buzz around the office. On Samsung phones, you get the Scalable Codec, which provides the best Buds2 audio experience. You also have the option of using gaming mode for lower latency on Samsung phones. Other devices have either SBC or AAC, which is common in this price range. Depending on your phone, AAC will probably be just fine, but this is one of those times when having earbuds that match your phone will offer advantages. 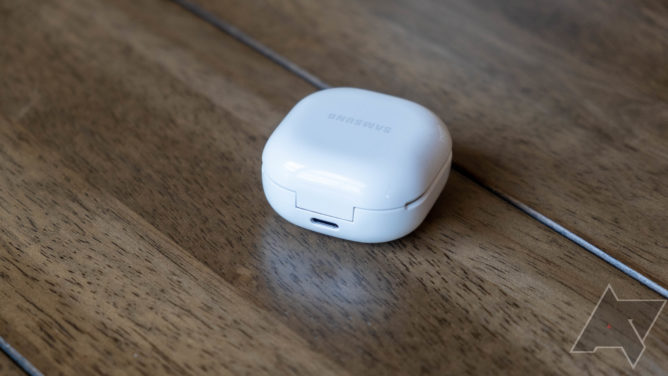 Noise-canceling has been moving down-market in recent years, and now you can get $100 earbuds with the feature. Those are usually pretty bad at covering up external sounds, but the Buds2 are better than the base level. They don't quite live up to the standard set by the Buds Pro, though. They're good at filtering out low, droning noises like a fan or street noise, but it's less effective at nearby speech and high-pitched sounds. ANC performance is, however, totally reasonable for the price. The same is true of call quality, thanks to the triple mic array. Callers had no trouble hearing me, but a few did say I sounded a bit muffled at times.

Pairing the Buds2 with your device is a breeze, as long as that device is a Samsung phone. The built-in Wearable app will find the buds, pair them, and even save the association to your account so you can easily connect the Buds2 on other Samsung devices (no multipoint, though). You can install this app on other Android phones, and you get most of the same features. This app also has various settings, including control customization. By default, most of the touch controls are off, which I find strange. The long-press defaults to toggling ANC on and off (more on that later), but you can also switch it to call up a voice assistant. However, that voice assistant is Bixby. Bummer.

The Buds2 will be taking the place of the Buds+ in Samsung's lineup, and the new arrival takes a step down in battery performance. The Buds+ could last through marathon listening sessions of up to 11 hours without a recharge, but the Buds2 top out at around five hours with ANC enabled and 7.5 hours without. In my testing, this is close to reality. This is a downgrade, but it doesn't strike me as a deal-breaking one. There are few situations in which you would need to listen for more than four or five hours without having the opportunity to drop the buds back in the charging case.

Yes, if you've got a Samsung phone. The tight integration with Samsung hardware is a real selling point. Increasingly, I feel like you should just get whichever earbuds your phone manufacturer makes, if that's possible. If you don't have a Samsung phone, the Buds 2 will work like any other Bluetooth audio device, and they might still be worth buying.  You should not, however, buy the Buds2 if you have (or might purchase) an iPhone. The Buds2 work as a Bluetooth device on iOS, of course, but there's no app support, so you can't change settings or adjust the EQ.

The true wireless earbud market is settling out in a predictable way. There are ultra-premium offerings like the Sony 1000X and budget buds at $100 or less that will get the job done. The Buds2 land in the middle, and they nail the basics. The Galaxy Buds2 might not have the longevity of the Buds+ or the premium sound quality of the Buds Pro, but they offer a lot for the price. They're comfortable, easy to pair, and the sound is excellent for the price. True, something like the Sony WF-1000XM4 earbuds have better sound and ANC performance, but they also cost more. And of course, proper over-ear headphones will offer better noise cancelation than any earbuds. 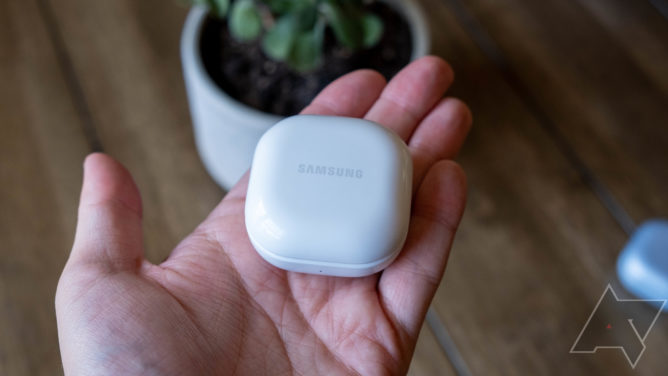 The $150 MSRP is reasonable, but the Buds2 will be hard to pass up when they go on sale. If you want to wait it out, it shouldn't be long. The Buds Pro dropped $30 within weeks of release.