Motorola announced a trio of Edge 20 phones for international markets a few weeks back, and it promised one Edge phone would come to the US soon. Well, here it is. The US will get a phone known simply as the Motorola Edge. This device has the most in common with the middle child in the Edge 20 family, but it has a few tweaks for the US. However, this is not a flagship phone on par with the Edge+ from 2020. The $700 Edge sports a Snapdragon 778G, and a 1080p LCD that doesn't curve like last year's OLED Edge phones. However, it does have a big 5000mAh battery and a 108MP camera. It's also $200 off if you order it right now.

The new Motorola Edge is the only one that Moto is releasing in the US, and sadly, it's not quite a flagship phone. Moto basically took the middle of the Edge 20 phones it just launched overseas and made a handful of changes, For example, the 5000mAh battery. Combined with the efficient CPU, I'm sure this device will last ages on a charge. Maybe not as long as it should have, though. This phone has an LCD display instead of OLED (hence the big chin), which is baffling considering the price. It is 144Hz, and yes, the screen looks very fluid, but that doesn't make up for the screen tech change. 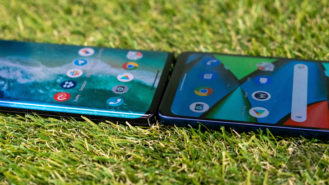 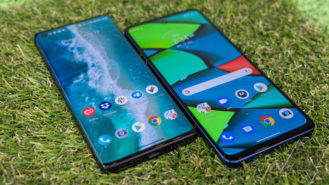 This is still an "Edge" phone, but that name doesn't make as much sense as it did last year. The screen is flat without the curves on the sides, which makes sense for an LCD. The sides and back are plastic, and they feel like it. This is not Samsung-style "glastic," which could easily be mistaken for glass. It's glossy and picks up fingerprints immediately. The patterns of reflection in the surface do look really nice, and the phone doesn't bend or creak. Moto says there's a metal frame inside (but that's true of most phones). 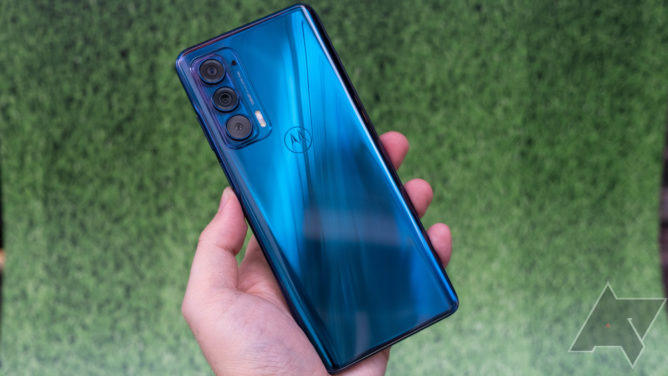 There's a big honkin' camera module on the back that is both impressive and disappointing. I'm happy to see that Moto was able to get a 108MP sensor in there, but there's no OIS. The Ultrawide being stuck at 8MP is a bummer as well. And the addition of a depth sensor on this phone seems strange to me. That's what I expect to see on a much cheaper device that just wants to look cool with three sensors on the back. Moto will be talking up some of its new camera features, nevertheless. The Edge has spot color in video and improved dual capture that lets you use any two sensors on the phone at the same time.

This phone launches with Android 11, and you'll get at least two OS updates. However, security updates are also limited to two years. That's not long enough when Samsung is pushing to four years. Luckily, it's still the same solid Android skin we've come to know and love. There are a plethora of gestures, a clean UI, no bloatware to speak of, and even premium features like Ready For, which is Moto's take on Samsung DeX. You can use a cable or Wi-Fi to project a desktop-like UI to a bigger screen. Plus, there's a PC client that lets you run your apps and access phone data on your computer. 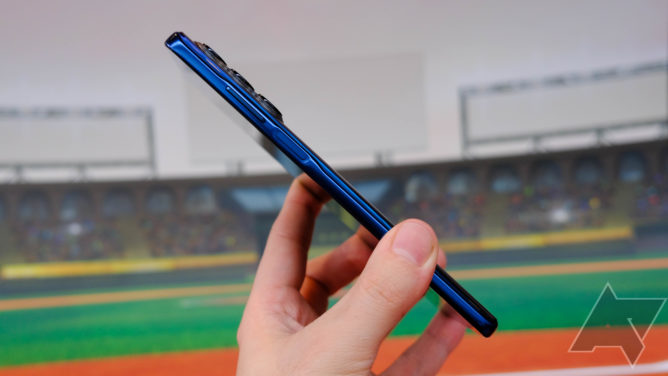 The fingerprint sensor has moved to the side (in the power button) because LCDs don't work with under-display sensors.

At the right price point, a phone like this could be a viable option for the right buyer. $700 is not that price, though. Motorola is going to offer $200 off the Edge at launch, but that price won't last. At $500, the Edge is at least competitive with phones like the Pixel 5a and Samsung Galaxy A52. Not so much at the regular price. The Edge will be available unlocked and from select carriers, including Verizon. Those phones will start at 6/128GB, but the unlocked one will be 8/256GB at the aforementioned price. Motorola will also give you a 30W charger with the phone, but carriers will probably stiff you. 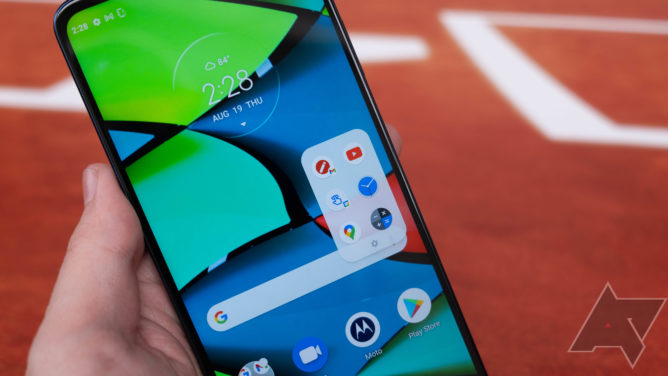 Some of Moto's Edge features live on.

Pre-orders are live today (Aug. 23) on Motorola's website, and devices will ship on September 2. At some point in the coming weeks, the price will go up to the full MSRP, but I strongly suspect Moto is going to end up dropping it again in the future. That said, we don't know when it will be this cheap again, If you're a Moto fan, and this looks like the phone for you, now is the time to pick it up. That $200 off won't last forever, and you don't want to wait to buy the Edge until it's already halfway through its life cycle.