Google has been working to support dark themes in many of its apps and services since Android 10 and system-wide dark theme started rolling out. It's been a slow and tedious process, but we're getting there. However, along the way light modes have become considerably brighter as well, with enough white to make you feel like you're being blinded — especially when working at night. That's a problem for apps that have gotten an updated UI, but were still waiting for a dark theme. Google Chat for the web has been just such an example, but luckily, it's now finally going dark.

A dark mode is now available for both the web desktop version of Google Chat as well as the Progressive Web App (PWA). The actual apps on both Android and iOS, on the other hand, have had a dark mode for well over a year (as does the version that's built into Gmail), so the web version is just playing catch-up here. 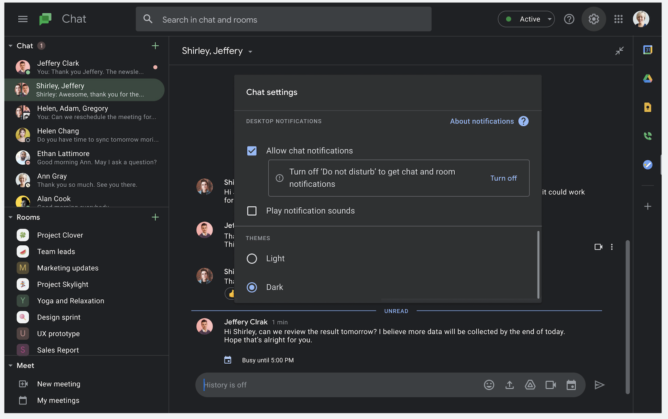 This tweak should greatly improve Chat's usability during nighttime if your workplace happens to employ Chat-based communication. There's nothing admins need to do to enable the feature on their end, and users just need to go to Settings > Theme Settings to enable the new dark look.

The feature is now available for all Google Workspace users as well as G Suite Basic and Business, according to the blog post. It's going to be gradually rolled out, so don't worry if you don't see it yet — it should show up on your end in up to 15 days.

Google is really trying to get people off Hangouts, and doubling down on its replacement, Google Chat, is the logical course of action. Now we just need to see if Hangouts users start actually liking it.