The Galaxy Watch4 turned a lot of heads recently, both for being a pretty darn good watch in its own right and the first model that uses the third-gen version of Wear OS, infused with Samsung's Tizen software. But early reviews indicate that the watch is, well, very Samsung: you'll have to dig deep to find the Wear foundations. A new leak from Fossil might catch the eye of anyone excited for a new generation of Wear OS hardware — admittedly, expected to run older software.

WinFuture.de has leaked a collection of retailer images of the Fossil Smartwatch generation 6, allegedly packing both the next-gen Snapdragon 4100 wearable chip and Wear OS — the old version, if the update schedule published by Google and Fossil is anything to go by. The design looks more or less the same as Fossil's usual smartwatch fare, available in various styles and finishes to suit your tastes. As a fashion brand, Fossil always seems to beat even Samsung when it comes to choices. The inclusion of the new operating system is crucial, since Fossil has already confirmed that none of its existing watches will be upgraded. 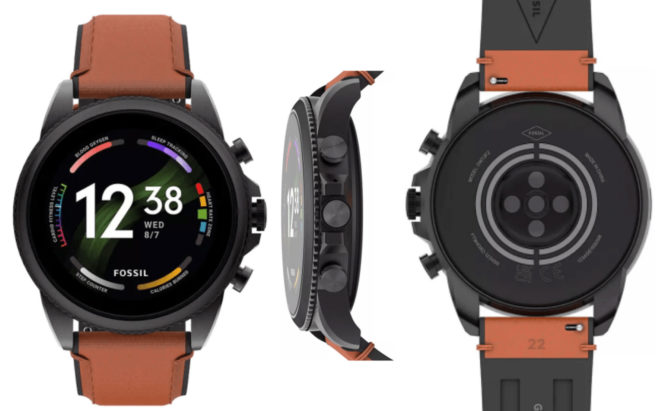 According to the source, the Gen 6 watch will use a 1.28-inch OLED screen with a resolution of 416x416, in cases either 42 or 44mm wide depending on the style. Inside is 8GB of storage, a GPS radio, and an advanced SpO2 sensor (on top of the usual heart rate monitor). Fast charging will give the watch 80% of its full battery life after just 30 minutes. Said life is quoted at 24 hours, with an extended energy-saving mode that should boost that for several more days with limited functionality.

WinFuture claims that the watches will go on sale in Germany on September 27th, with prices ranging from 300 to 330 Euro. That should equate to approximately $350-375 in American dollars, though other factors might change the price here and in other territories. We're looking forward to this and other Wear OS alternatives, some of which might come with a more palatable price tag.

We initially claimed that this watch would have Wear OS 3, but that's incorrect. Based on the current schedule, it's expected to launch with the older version. Our coverage has been updated.