Trading in your old phone can be a great way to cut down the cost of a new handset, and that's all the more important when we're shopping for expensive phones like the Galaxy Z Fold and Z Flip series. With Samsung's latest models, it looks easier than ever to save a lot through trade-ins, thanks to the company letting you trade in up to four devices at once.

Samsung first published the reservation link for its new foldable flagships last month, and those who followed it noticed that they could add two trade-in phones — at least in the US. As far as we could tell, this was the first time Samsung had allowed this, and it was definitely a welcome step. You clean your drawers or cabinets of unused devices, you send a phone back to a company that (hopefully) will put it or its materials to good use, and you get some money off of your next exorbitant purchase. Win-win-win.

We assumed this two-device limit would continue to be the case when the Z Fold3 and Flip3 were announced this week, but it turns out we were in for another surprise: Samsung bumped its trade-in limit up to four. Head over to pre-order one of those phones now, and you'll be presented with the option to offload four old phones, tablets, wearables, or any combination thereof.

There's still one important limit to keep in mind: Samsung places a total value cap on your trade-ins (varying based on the cost of what you're purchasing). But honestly a lot of the offers it's making for your used hardware (maybe its own products notwithstanding) are on the lower side, so you probably won't have to worry too, too much about hitting those ceilings. 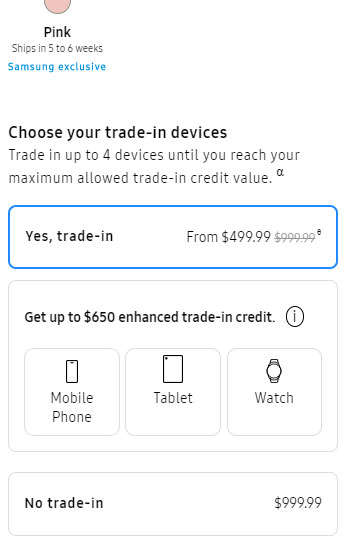 Updated to reflect Samsung raising trade-in limit from 2 to 4 devices.

Pixel 6 main camera sensor could be 3x the size of the Pixel 5's, plus an Exynos modem

Android Auto starts suggesting music, news, and podcasts, so you can keep your focus on the road