There have been a slew of budget and mid-range phones released with 5G support in the last year, and the $400 Samsung Galaxy A42 5G is one such device. It sits in between Samsung's A32 5G, and the almost-flagship A52 5G. This means there are some compromises, such as the screen's 60Hz refresh rate, but the phone does excel in areas like performance and battery life. You can expect quality software support as well as a pleasant and responsive UI, though the amount of bloatware included with this phone borders on ridiculous. The A42 is also in a weird place between two other mid-tier devices, both of which are arguably a better deal.

Note: We reviewed the Verizon-locked version of the A42. It is also available unlocked (with less bloatware). The Galaxy A42 5G makes a great first impression, especially for the price. It's a smoothly rounded rectangle, and it has a glass back. Cheaper phones (and even some more expensive ones like the S21) are plastic. The gradation of four tones under the back glass makes for a slick look, especially with the dot pattern that creates an iridescent reflection. The rear camera bump is mostly unobtrusive (though it does rattle a little), and the teardrop front-facing camera cutout doesn't look too out of place with the fullscreen design. While it would have been nice to see even bezels on all four sides, the chin is thicker than the rest, and it's definitely noticeable when the screen is on. 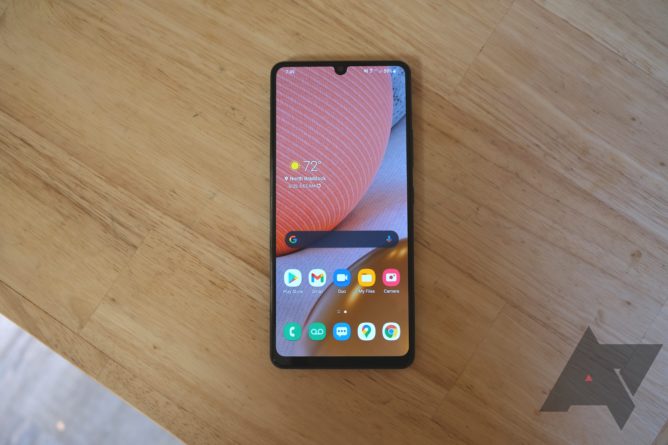 Speaking of the screen, it's a 6.6" OLED, but it only supports 60Hz, though its colors sure do pop. It's a 720P screen, and yet it's surprisingly crisp. Nothing is blurry or pixelated at normal viewing distances. To power the OLED, there’s a large 5000mAh battery, and it supports 15W charging. That’ll get the job done, but I’d prefer faster charging at this price.

The device is relatively slim for its size, with just a few obtrusions interrupting its lines. The power button sits below the volume buttons on the right side, and there is a headphone jack on the bottom of the device, along with a speaker grille and USB-C port. The earpiece serves as the second speaker for stereo sound. 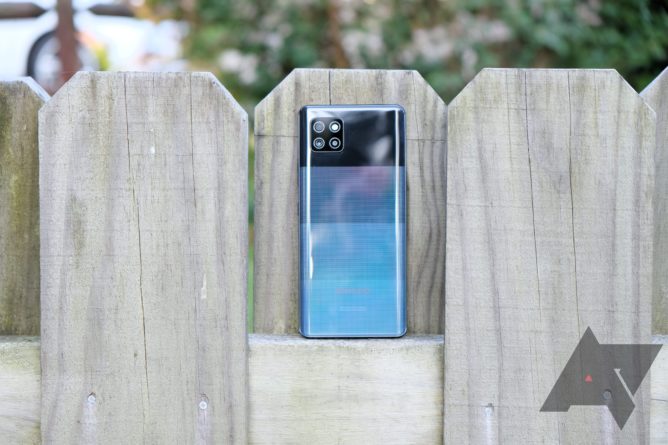 In the box, you can expect to find the 15W charging brick, a USB-A to USB-C cord, instruction booklets, a SIM ejector, and of course, the phone. You don't get a case. No headphones are included either, just a phone and a charger—enough to get anyone going.

I haven't used a network-branded device in years, and so the amount of bloatware on the A42 is pretty shocking. Setting up the device took forever, thanks to all of this bloatware that had to be updated. That's annoying enough, especially as a first impression for every single person using Verizon's A42. But on top of the many many unnecessary Verizon and Samsung apps preloaded on the device, there's also Facebook, Yelp, Snapchat, Spotify, Netflix, Disney+, Apple Music, Yahoo News, Yahoo Mail, Pluto TV, Candy Crush Saga, Toon Blast, Empires & Puzzles, Toy Blast, Outlook, Microsoft Office, and OneDrive. So I had to spend even more time after the initial setup to remove as much of this junk as possible.

I was even more aggravated with the out-of-the-box behavior of Samsung Pay. Until you sign in, you can't turn off the swipe-up shortcut that makes using the standard Android swipe-up gesture to go home or pull up your app switcher utterly unreliable because you never know if Samsung Pay will be activated from the upwards swipe. And guess what, you have to activate Samsung Pay to access its setting just to turn off this horrifically annoying shortcut. Suffice to say, I neither enjoy being strong-armed to sign into services I'll never use, nor do I enjoy forced features that screw up the expected behavior of Android's swipe navigation. While Samsung’s flagship phones do the same dumb stuff with Pay, it’s not any less annoying at $400 than it is at $1,000. 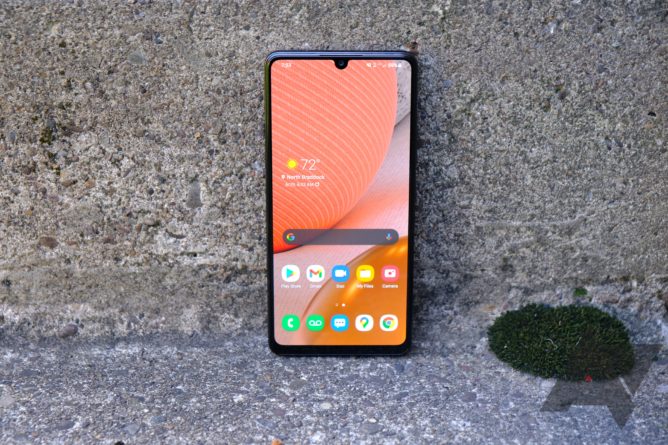 Beyond the bloatware and nonsensical Samsung Pay settings, I am happy to see that Samsung has made the switch to use Google's Discover as the left-page slide out in its launcher. I also like that the app drawer is pretty customizable, offering sorting features and a way to hide apps, so I didn't even feel the need to switch to a third-party launcher, something I found very refreshing for a mid-range Samsung device. Samsung's browser is also excellent, along with the Game Launcher app that offers built-in recording as well as a way to hide your games from the app drawer. So, I can’t condemn all of Samsung’s  pre-installed software—some of it is useful.

Most buyers would consider $400 as cheap for a Samsung device, but the included Snapdragon 750G punches well above its weight. Even on the 60Hz screen, animations are fluid, and even though the phone only packs 4GB of RAM, you can switch apps quickly. Even the camera opens fast, a shortcoming on many mid-range phones. Really, my only gripe with software performance has to do with the in-screen fingerprint reader, which is often slow to wake up.

Of course, gaming performance isn't stupendous, but that's expected. If you only play casual games like bubble poppers and idle stuff, then you'll be fine, but if you're looking to throw Genshin Impact or anything else that's demanding on there, you're going to have a bad time.

When it comes to battery life, you’ve got nothing to fear. The big 5,000mAh cell should last two days with moderate use, and even if you spend your day gaming, you'll still easily make it to bedtime. Heck, I let the phone idle for six days straight, and it still had battery life left on the sixth day, which is pretty amazing. While the 15W charging cap is disappointing, you can still reach a full charge in a little over an hour. 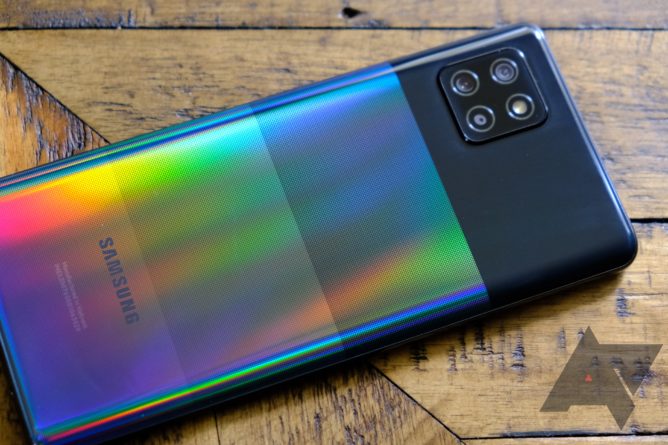 You get three cameras on the rear of the Galaxy A42 5G, a 48MP primary sensor, an 8MP ultra-wide, and a 2MP depth sensor. Like most modern smartphone sensors, you can take some lovely shots with enough light. Having an ultra-wide lens definitely comes in handy if you're constantly out and about, though the depth lens is just as useless as it is on the A32 and A52. It would have been nice to see a telephoto zoom lens, but that’s rare at this price point. I might have even taken a macro lens—it would be better than a depth sensor that doesn’t do anything.

I found most shots with the selfie cam somewhat muddy. With perfect lighting, its shots are passably crisp, but trying to take detailed selfies in a poorly lit room proved difficult. Backgrounds were always blurry, but not in a good “bokeh” way. The high megapixel count just isn't offering what one would expect.

All around, you get what you pay for when it comes to the A42 5G's cameras. This is a mid-range device, so the cameras are middling. You won't be winning any competitions with your shots, but for quick pics of your kids and pets, what's provided is perfectly fine. Maybe. The Galaxy A42 5G I reviewed is a carrier device, but you can also grab one unlocked. If you're not married to Verizon, Samsung's cheaper A32 ($280 retail) and slightly more expensive A52 ($500 retail) may be better options, depending on what you're looking for, hence the odd positioning of the A42 in the market. Of course, there are fewer options if you want to buy a 5G Samsung phone direct from Verizon, so the A42 is easier to recommend on Big Red's network.

Regardless of where you get it, the A42 5G is a solid phone that packs exceptional build quality. Performance is snappy, even though you only get 4GB of RAM, and the large battery means you'll avoid range anxiety. You can also expect expedient and long-term software support, though the massive amount of pre-installed bloatware should have lowered the price a little further, in my opinion. Also, the cameras are just good enough but don't really offer anything special. 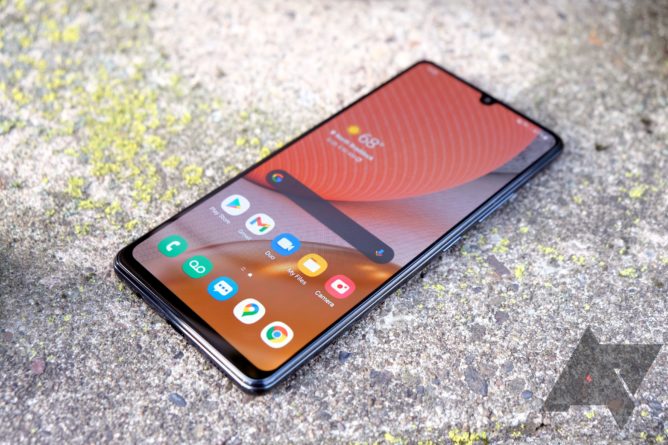 Still, for $400, you get a solid device that packs exceptional build quality. Performance is snappy even though you only get 4GB of RAM, and the large battery means you'll easily get through a day or two without worrying about your charge level. You can also expect expedient and long-term software support, though the massive amount of pre-installed bloatware should have lowered the price a little further, in my opinion. Also, the cameras are just good enough but don't really offer anything particularly special.

Outside of the bloatware, slow fingerprint reader, and mid-range cameras, there isn't much to dislike about this phone. The Galaxy A42 5G is a hodgepodge of mid-range specs and features, but if you're looking for an affordable Samsung smartphone on Verizon, the A42 5G is a good choice. On the other hand, the unlocked model is more of an ask at $400 when the A32 and A52 are competitive options at their respective price points.

After spending more time with it, I’ve grown to love the Samsung Galaxy A42’s striking design. This is a shiny phone, almost metallic-looking in person, but it also offers an iridescent reflection peppered with an eye-catching dot pattern. I know it's a silly thing to highlight, and yet for me, it makes all of the difference. I still notice how compelling this phone looks a month later, which I didn't expect from a middle-of-the-road Samsung device. It's a stunner, no bones about it. 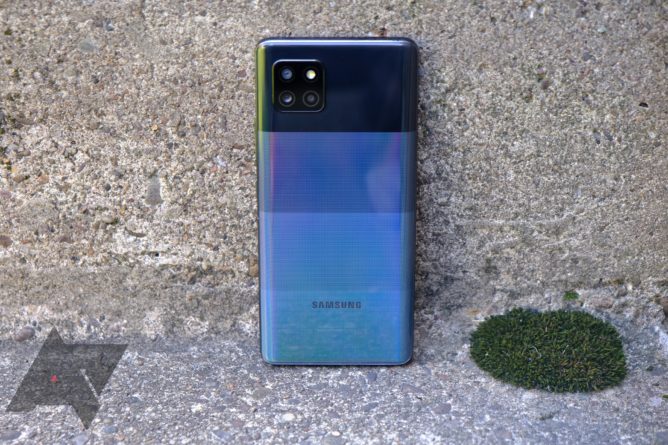 Something about this rear design really speaks to me

But enough about the A42's striking style. Samsung is asking $400 at retail, which is a tough sell since the company saw fit to launch two similar devices with the A32 and A52 at the same time. Compared to these two mid-range phones, the A42 sits in a weird spot—the 720P OLED screen and 4GB of RAM don't sound like the best deal, although I can confirm these potential bottlenecks have not been a problem more than a month after my initial review. The UI is still snappy, and screen transitions are so smooth you won’t believe they’re capped at 60FPS. Gone are the days of expected slowdown with extended use, something I'm thrilled Samsung was able to wrangle in the last few years.

Still, the middling specs aren't going to wow anyone, and the cameras don't fare much better. Sure, they'll do in a pinch if you need to snap a quick shot of your kid or pet, but you're not going to be showing off to your friends who own Pixels and iPhones. The slow fingerprint reader isn't doing the device any favors either. On the other hand, the battery life is still superb, thanks to the undemanding screen and 5000mAh battery packed inside. Yes, the included 15W charger is a little disappointing, but it can still fully charge the device in about an hour. Even better, the lengthy standby time is almost unbelievable. I can still eke out six days of standby out of a single charge.

When considering the Galaxy A42 5G as a complete package, there's definitely more good than bad. Although, like all mid-range smartphones, some compromises will have to be made. Luckily these compromises are few and far between if you can get past a few hardware shortcomings. In my experience, most games play fine, most apps stay open in RAM, and overall performance rarely wavers. For $400, you could do much worse, though if you can catch the A52 on sale (and it goes on sale frequently), you may find the 120Hz screen and 6GB of RAM more enticing.