Though the company leaked it a bit early, the new Nest lineup of smart security cameras is now official and covers a wide spread of options, from new battery-powered cameras to the cheapest Nest Cam yet, and even a brand new floodlight. Price range from $280 down to $99. Availability for the four new models varies, with pre-orders for the new $180 battery-powered Nest Cam and $280 Nest Doorbell starting today. And if you're cheap (like me), Google's also expanding what you can do without a Nest Aware subscription.

The seeming star of today's announcement is the new battery-powered Nest Cam, which is meant for both indoor and outdoor use, with an appropriate IP54 rating. It's battery-powered, but you can also use it wired with optional (read: separately purchased) weatherproof cables available in 16-foot and 33-foot lengths and which attach with POGO pins. It also comes with a non-weatherproof cable for charging. A solar panel accessory for fully independent wireless operation is also coming, as is a horizontal stand with a 10-foot cable and anti-theft mount. 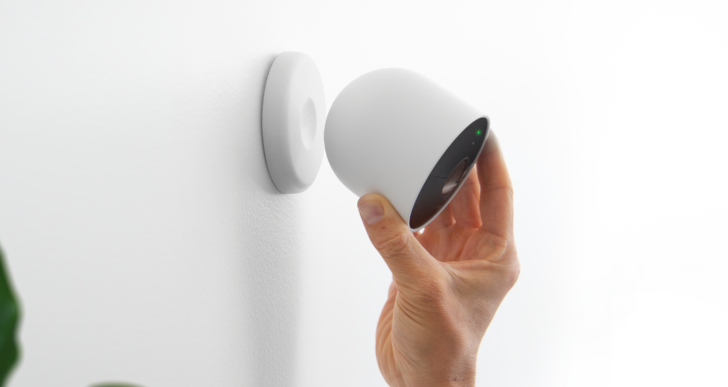 Battery life varies based on use and configuration, and Google doesn't offer a firm estimate, given how widely use cases vary, but we were given a few ranges. If you have a lot of events, a month (or less) could be possible. If you have very few alerts and events, up to 6-7 months could be achieved. Most customers should land somewhere in the middle.

As a battery-powered camera, it will continue working if your power or internet connection drops out, recording up to one hour locally — which could translate to around a week's worth of events, according to Google — and will upload recordings once the internet connection is restored. However, while powered by its battery, we're told it can't do 24/7 continuous recording — just events/alerts. While wired we were told it can do the full continuous shebang. More specific details about what can be recorded for battery and wired models is documented here. 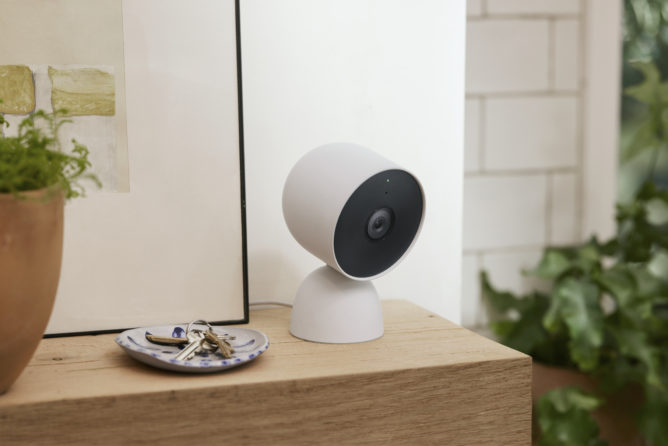 This stand is optional; it doesn't come with it.

Hardware-wise, it's 1080p (1/2.8" sensor), with a 130-degree FoV, HDR recording, and night vision capability, courtesy of IR LEDs. Connectivity is via Wi-Fi with dual-band b/g/n support (varying by market), though it also has BLE. An RGB status light indicates, among other things, when it's recording, and the camera does encrypted uploads and plenty of stuff on-device if you're concerned about privacy. We're told there's no Matter support for the nascent smart home standard, but it otherwise integrates with the Assistant and Google Home hardware as you should expect — and this time, setup is entirely through the Home app, not the antique Nest app.

The new Nest Cam attaches to its base magnetically, but there's also a separately available "anti-theft mount" if you're concerned about someone grabbing it off your wall and taking off with it.

It's a pretty advanced smart camera, with features like zoned detection and some limited object recognition for alert types, as well as the ability to recognize individual people (if you pay extra in your subscription — more on that later). Google claims this new camera lineup is 7.5 times faster in ML detection and can recognize 9 separate object classes, including people, animals, vehicles, packages, and subtypes of each — all processed entirely on-device. We're told 2.5 million synthetic cats were used to train the models, so it should have a pretty firm grasp on feline detection. 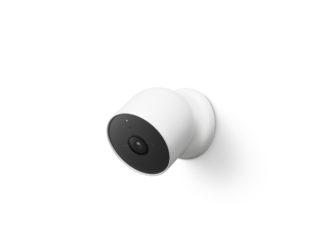 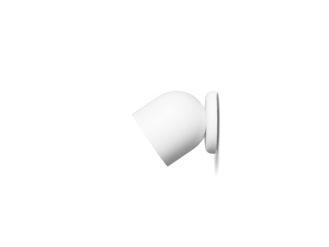 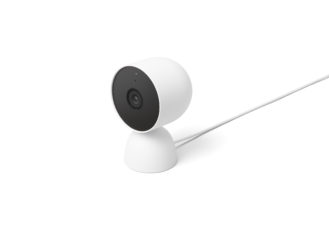 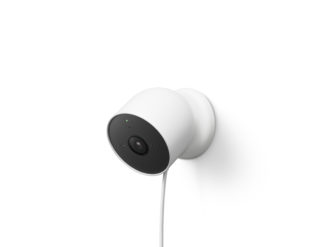 Pre-orders for the battery-powered Nest Cam start today for $180. Retail availability is set for the 24th. 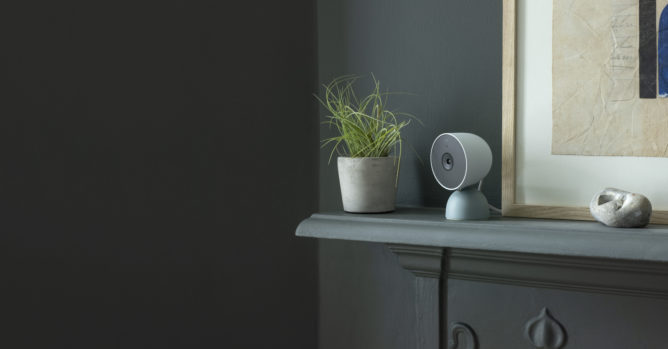 The new wired Nest Cam shares many of its internals with its more expensive battery-powered cousin — 1080p, HDR, upgraded TPU, etc. — but to hit that lower $100 price point, a few corners were cut. There's no IP rating, no battery, and no snazzy magnetic base.

The new wired Nest Cam looks a lot like the prior Nest Cam IQ Indoor design-wise, though with a more bulbous base. (The base is wood in one colorway, though, which is pretty snazzy.) The rat-tail cable that provides power is built right in, so you don't have to play with POGO pins or buy separate cables to use it. There's also a mount built right into the base for putting it on a wall. 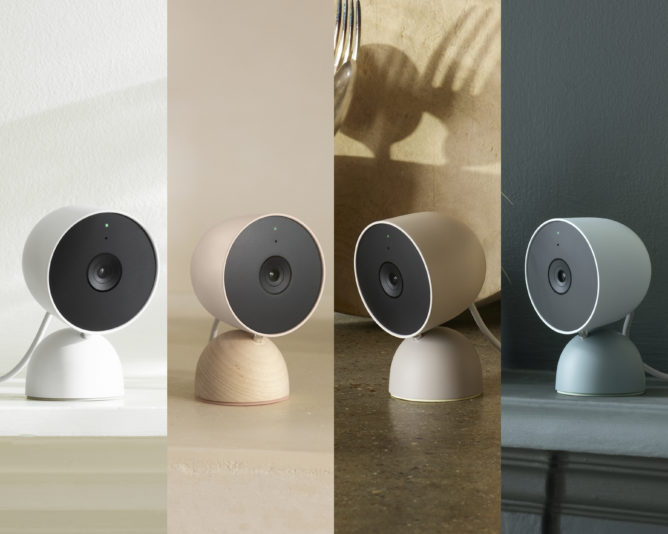 Availability for the new wired Nest Cam is still TBD, but it should cost $100 when it does land and be available in four colorways: Snow, Sand, Linen, and Fog. Sand gets the snazzy maple wood base. 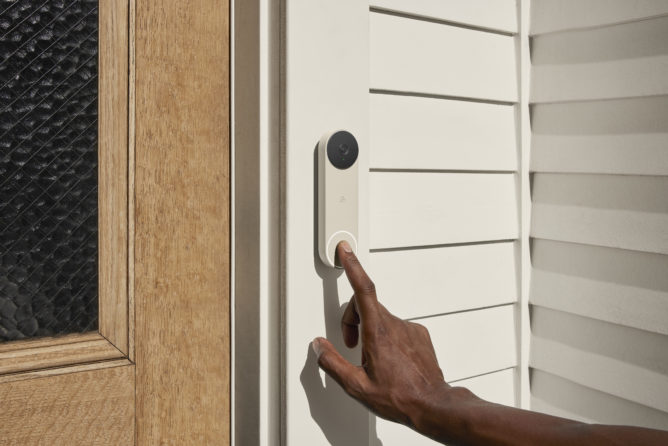 Google's also releasing a new doorbell — this time, with a battery and expanded voltage compatibilities, plus the other perks described above for the new line of Nest Cameras. The biggest difference, outside basic doorbell functionality and design, is that the Nest Doorbell has is a wide 145-degree FoV for recording and a different sensor: 960p and 3:4, rather than 1080p and 16:9. (Though note, that's a narrower FoV than the prior Nest Hello.) It's still HDR with night vision, etc.

Though it is battery-powered and can work without it, you can also wire it in like a traditional doorbell and take advantage of that as a source of power and ring your existing buzzer/bell. Power compatibility has expanded to 8-24 VAC and at least 10 VA — in short, it should work with more existing wiring setups than the prior Nest Hello. 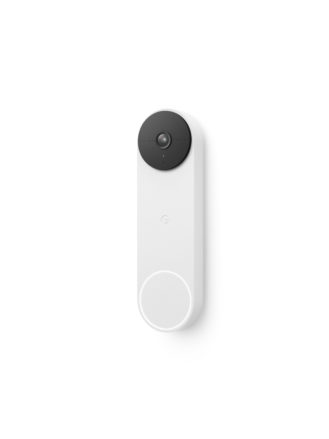 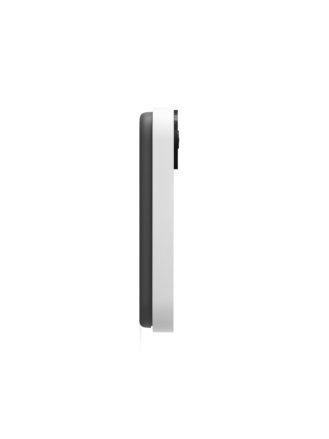 If you opt for battery-powered operations, Assistant-integrated speakers and displays can handle the chime, and you can top it up at your own discretion — it can be configured to ring and let you know when it's running low. Update: Unlike the other battery-powered camera, the Nest Doorbell can't do continuous recording even while wired. Typical battery life is said to be around 2.5 months, though it may be less if you record a lot of events.

As an outdoor device, it's IP 54 rated, so you shouldn't have any trouble with the weather. Google also claims to have pulled out all the stops when it comes to QA, guaranteeing even the consistency of each doorbell's LED light. And for the ecologically minded, plastic components are made of at least 45% recycled content.

Accessories include both vertical and horizontal wedges, a wall plate, and a separately available AC adapter. 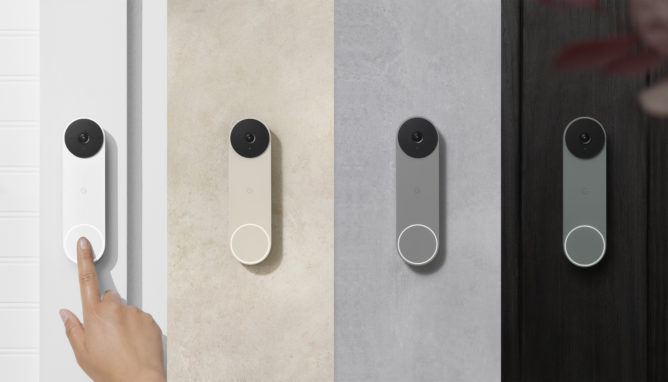 The Nest Doorbell is available for pre-order today for $180 in Snow, Linen, Ivy, and Ash colorways. Retail availability is set for the 24th

Last among the new models released today is the Nest Cam with floodlight, inconsistent capitalization and all. It's Google's first Nest-integrated smart floodlight, a product category I didn't know I needed in my life.

Unlike some of the other new products above, the Nest Cam with floodlight isn't battery independent, though it can record offline for later upload, with up to one hour of on-device storage — that translates to around a week's worth of recording. 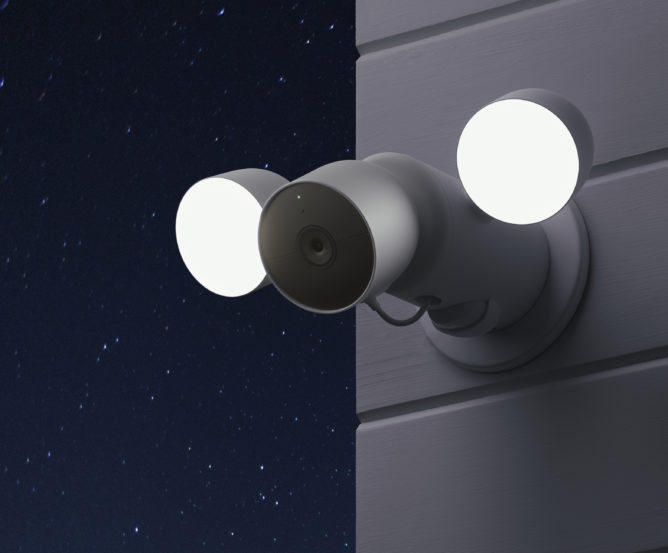 Physical design is half floodlight and half Nest cam, with the usual Nest-like design tweaks. We're not sure what sort of lightbulbs it takes or if you can swap them out, but the individual floodlights (which look sort of like shrouded Nest Cams minus the camera) don't appear to have much in the way of user-serviceable parts. The camera and lights both look like they can be freely positioned to focus light and your view exactly where you need it, together with a wall mount.

Again, it has similar specs to the other devices that landed today: 1080p, HDR video, IR lights for night vision, detection capabilities for nine object classes, on-device processing, encrypted uploads, etc. — you should have the idea by now. 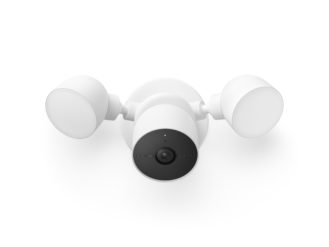 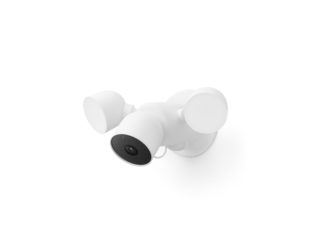 It's also the most expensive of the new products, at $280. Sadly, we don't know exactly when it will land in stores.

We'll be covering this separately and in greater depth, but it's also worth pointing out that you can do more with these new cameras without a Nest Aware subscription. You get four different types of intelligent alerts, three hours of event video recording, and activity zones, all for free. Considering how much of these new Nest Cam's smarts are handled on-device (and considering how much of Google's lunch Wyze must be eating these days), making more of these features independent of a subscription is a good perk — though I bet most folks will still want more recording time.

Together with these new products, Google's also making some changes to the Nest app situation. The awful and confusing dichotomy of a Home and Nest app won't apply to these new cameras; they are set up and handled entirely in the Home app (YAY). Google also plans on making that change for older Nest cams as well. Other UI changes, including a redesigned Sightline playback interface, are also coming.

If any of the products above have piqued your interest, keep an eye out for our upcoming reviews. We should be looking at the new battery-powered Nest Cam and Nest Doorbell at a minimum.

Nest cameras are finally fixing one of their most glaring issues