My Friend Pedro is a Devolver Digital game focusing on tight, visceral combat, stylized visuals, and a trippy hallucinogenic story. And because that describes about 95% of Devolver Digital games: this is the one with a banana in it. The game got rave reviews when it released on PC and consoles back in 2019, and now there's a mobile version coming to Android.

To be clear, this is a mobile game first, not a port of the 2.5D slow-mo shooter. The original game is probably a bit too tight to translate well to touch controls, with its focus on precision shooting at multiple targets at once. Based on the screenshots in Play Store, the mobile version is using a more cartoony, super-deformed art style and a simplified control scheme. The ridiculous physics, which allows you to ricochet bullets off of a frying pan to hit bad guys behind cover while you kick-flip another guy's teeth out with a skateboard in the next room, appear to be intact. 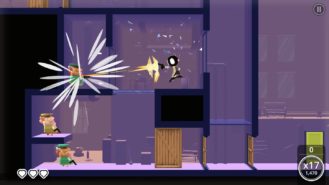 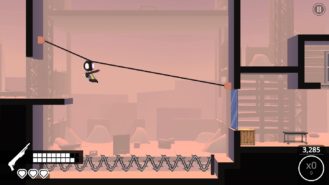 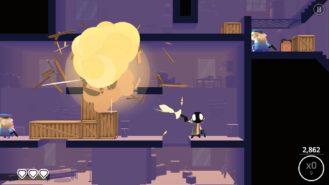 Not much concrete info is available via the Play Store description. But if I had to guess, I'd say that the mobile version of My Friend Pedro is using an auto-run mechanic to get you through "37 action-packed levels" and the odd vehicle section, the better to let the player focus on racking up crazy shots and combos. Pre-registration is available now, and we'll be waiting patiently for a release, and news on what kind of monetization the game is using.

My Friend Pedro comes to Android with an interesting control mechanic

My Friend Pedro is a popular indie parkour platforming shooter on PC and consoles. It's well-reviewed, and that's because it's pretty fun. This is more than likely why somebody had the idea to bring the game to mobile. Still, instead of porting the title, we have an all-new version created specifically for mobile devices, yet, it goes by the exact same name, creating confusion that will assuredly work in the mobile game's favor, which feels a little dishonest.

Luckily the mobile version of My Friend Pedro is actually pretty good. The gameplay is still similar to the mainline version in that you'll platform around stages as you snipe and blast baddies while you're jumping and vaulting through the air. The thing is since this is a mobile game, you have to use touch controls, and so you'll navigate by slingshotting yourself around each stage, similar to how you'd sling your feathery friends in Angry Birds. These slingshot-based touch controls work well, though they don't feel very intuitive for some reason, so it will take some time to get used to them for optimal performance.

You can try My Friend Pedro for free before you buy, and if you like what you see, you can unlock the full title for $2.99 through an in-app purchase. You can even play through the whole game for free, but if you don't pay for premium, you won't be able to restart from checkpoints, so you'll have to complete the game in one sitting, which will be really tough since this is a challenging game.

All in all, the mobile version of My Friend Pedro might not be the same as the popular console and PC version, but it holds its own, even with the change in controls and graphics. Thankfully anyone can try the game out if they think it looks interesting, so if you're a fan of platformers, bullet-time shooters, or simply dig slingshot controls, there's a lot to like here that's easily worth $2.99. Nest cameras are finally fixing one of their most glaring issues

Nest's server problems will matter less with its latest cameras