If you haven't been following digital picture frames (I don't blame you), it may not be immediately obvious why they still exist — when every screen you own is connected to the internet, after all, every screen you own is a potential picture frame. But modern digital frames aren't the Sharper Image novelties you're probably imagining. The Lenovo Smart Frame, for example, is a big, 21-inch screen that connects to Google Photos to seamlessly source pictures from any of your albums, and while it's got some rough edges, this thing has become one of my favorite gadgets. I just wish it were a little more affordable. 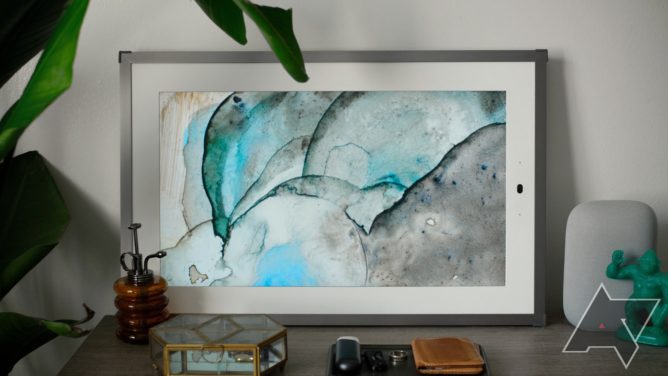 When it's on in a well lit room, the Lenovo Smart Frame just about looks like a normal framed photo. The 21-inch display is flanked on all sides by an inch-and-a-half-wide white "mat" inside a gray metal frame. The first and most obvious sign it's a fake is a cluster of sensors, either to the side of or below the display, depending on the frame's orientation. These sensors let the display adjust its brightness and tint based on ambient light and allow for gesture controls, and they're not not too distracting. But considering how pricey the Smart Frame is, I can't help but think there must be a more elegant solution. The $99 Nest Hub refresh supports Google's Ambient EQ display tuning and can sense motion with radar, and its sensors aren't nearly as obvious. 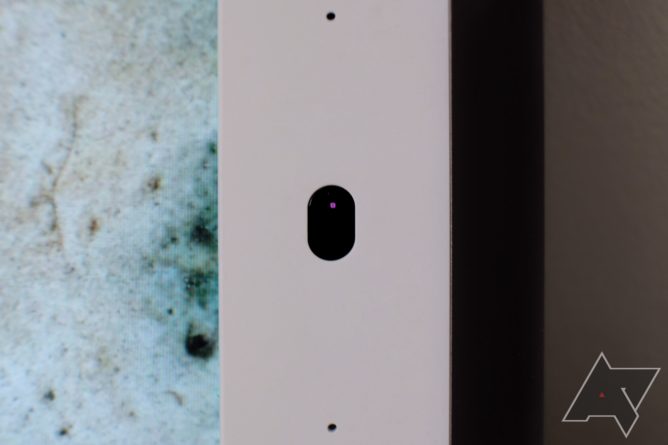 The included frame is nice enough. It's dark gray aluminum with a brushed finish on the sides and a subtle Lenovo logo in a spot you won't often notice. You can opt to leave it off, if you think the Smart Frame looks better without it; it's entirely decorative. I think Lenovo had originally planned to offer more frame varieties: early promotional renders showed a nice wood grain version. But currently, the default frame is the only option.

Curiously, the Smart Frame has both a microphone and two rear-firing speakers that, as of now, literally do nothing. Lenovo says they're "included for potential future updates," but offered no specifics. It'd be cool if this thing eventually picked up smart speaker functionality, but I don't know if or when it will — and, for the time being, having a microphone on an internet-connected device for no reason isn't exactly the most comfortable thing. 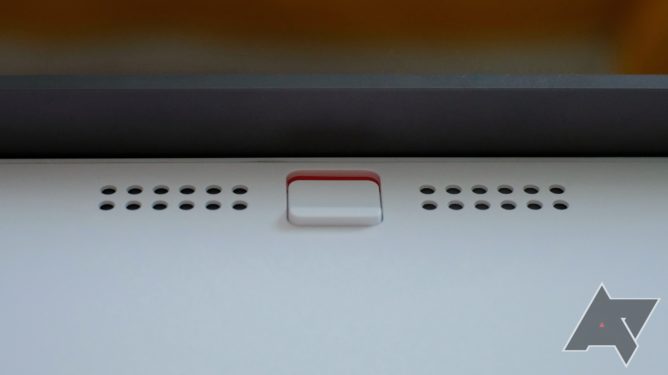 The two mounting hardware release switches are flanked by speakers that serve no purpose.

In addition to the display, its frame, and a chunky power brick, you get everything you need to mount the Smart Frame on a wall: screws, drywall anchors, and a clever mount that lets you rotate between the display's two supported orientations without having to take it down.

The Smart Frame is dead simple to set up. It comes with great mounting hardware that includes a built-in level so you can be sure you're hanging the frame straight, and it even lets you rotate between orientations without taking the frame off the wall. But I live in an apartment and like to pretend I'm getting my security deposit back, so I just plopped it on a dresser. Wherever you decide to put it, it's not hard to get going: plug it in, download the companion app, follow a few prompts, and you're off to the races. Getting your photos on it is easy, too, thanks to Google Photos integration. Just give the display access to your Photos library, select the albums you want to show, and that's it.

Sourcing pictures from Google Photos is convenient in a number of ways. Your photos are probably already there, for one. It's also easy to collaborate with other people, in or outside your home. Say you and your partner both want to add photos of your kids. The two of you can add photos to a shared Google Photos album, which will then show up on the Frame. Or you could share an album with your grown children, and they can add their own photos to keep you up to speed on their goings on. It's a really great way of managing a product like this, and it makes other ways of controlling smart picture frames look positively archaic by comparison. 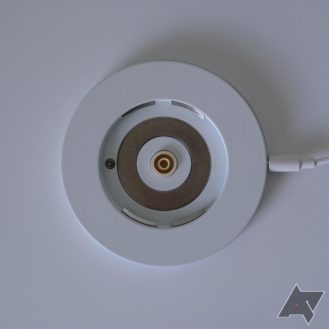 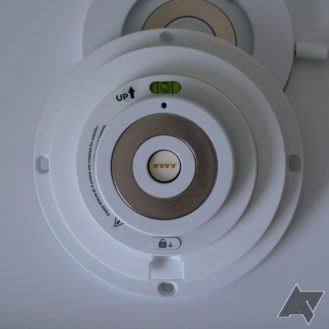 The mounting hardware is very nice.

In addition to your own photos, you can set the Frame to show a curated collection of artwork or one of a few analog clock options. There isn't a ton of curated art available, and you only get a handful of clocks — none of which look very nice, in my opinion. But you can turn those modes off and elect to only display your own content. You also have the option to display the time (in 12- or 24-hour formats) and the date each photo was taken, but each is only available in a stark sans serif font that just doesn't look very good.

Content on the display can be controlled in three ways: using touch-sensitive buttons hidden in the frame's "mat" (that are unfortunately always visible unless disabled), via the Smart Frame app, or using motion controls. When those motion controls are enabled, with your hand just far enough away, you can swipe left or right in the air to move back and forth in your photo queue, or down to swap between display modes — photos, art, and clock. Motion control is a bit wonky, often failing to trigger when I want it to (or triggering by mistake when I walk by), but with practice, it's serviceable. 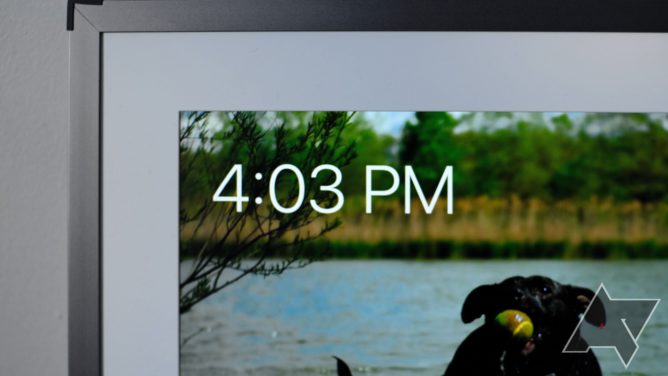 The clock that optionally displays over photos isn't particularly appealing to look at.

Through the frame's companion app, you can tweak tons of functionality: adjusting brightness; choosing which Google Photos albums you want to display; changing what times the frame turns on and off; and managing how photos are shown. By default, the frame will show both portrait and landscape photos regardless of its orientation. You can lock it to only show pictures that fit, or set it to make side-by-sides and collages out of photos that otherwise wouldn't. It's not quite fool-proof, but it's easy enough to navigate. You also probably won't spend much time in it, considering adding new photos to the frame can be done entirely from Google Photos. The screen itself is very good. It's a 1080p LCD panel, but from the distance you'll normally be looking at the Smart Frame, that's more than enough — if you don't currently have a television that's this resolution, you probably did up until fairly recently. More importantly, colors are vibrant and viewing angles are solid. During the day, at a glance, you might not even notice it's not a real picture frame.

I say "during the day" because Lenovo's automatic brightness control is just a touch aggressive for my taste. Sure, it'd be worse in most cases for a photo to be too dim than for it to be too bright, but during the evening with the lights off, this thing is very obviously a glowing screen. It just doesn't get dim enough. An OLED panel this size would drive the price up even further, but that isn't the only solution. The Nest Hub Max in my kitchen, for example, also has an LCD panel, but it's calibrated way better than the Smart Frame, when it comes to both brightness and color temperature. Still, it's only an issue in particularly dark rooms, and a pretty picky one at that.

If you want an easy way to get pictures from Google Photos to your wall, sure.

At an MSRP of $400, there's no denying that the Smart Frame is a luxury product. But when you consider that having a single printed photo of this size professionally framed could easily run you a hundred bucks, being able to quickly toss any and every picture you've ever taken up on your wall from the comfort of the couch starts to look like pretty valuable. They look great on this screen, too.

It's a shame that even though the Smart Frame runs Android and has both a microphone and speakers, all it can do is display pictures and the time. The focus here was obviously always highlighting artwork, and it doesn't have a touchscreen, so normal apps wouldn't even function — but if this thing could show me news and weather in an air gesture-friendly interface, that'd be a big bonus. Lenovo is apparently kicking around uses for the vestigial hardware, but there are no concrete plans for feature updates, and given how niche a product the Frame is, I'm not holding my breath. Still, it's good at what it does. If you've got the photos and the dough, go for it.

Nothing’s changed about the Lenovo Smart Frame itself since our initial review; the functionality today is exactly the same as when I got the thing, and if it’s received any updates at all, it hasn’t gone out of its way to let me know about them. And no, the microphone and speakers still don’t do anything. But I’m still using it (if “using” is the right word — it kind of just sits there) and I still love it. 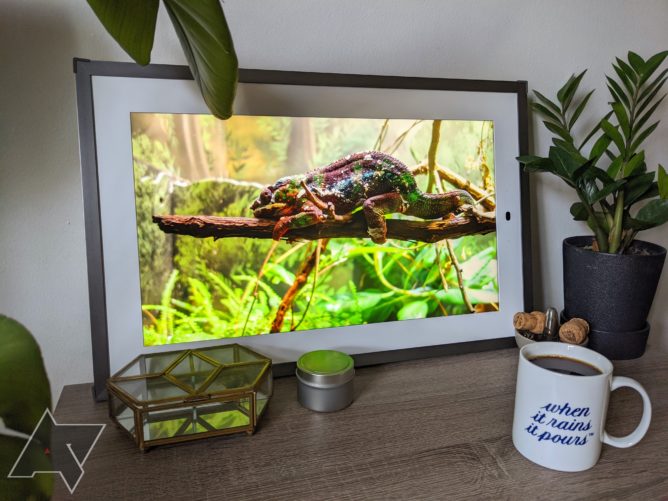 It’s ridiculously simple to keep the Lenovo Smart Frame up to date with your new photos: just add them to a Google Photos album you’ve linked to it. That’s it. And since I use the same album for the Smart Frame as I do for my Nest Hub Max and Chromecast’s photo frame modes, my favorite shots populate across all my screens seamlessly. I’ve shared the album with my fiance, too, so we can both tweak it in a snap.

The motion controls have gotten easier to use with time and practice, but that fluidly swiping between photos requires a multi-week learning curve is patently ridiculous. These controls are objectively bad and you won’t enjoy using them. But on the plus side, if you’re using the Frame like I do, you never really need to interact with it: it shows a new photo every few minutes on its own, and that’s all I expect of it.

These controls are objectively bad.

The way it shows those photos can get a little weird thanks to its aspect ratio, though. Most camera sensors — from Real Cameras™ all the way down to $200 phones — are 4:3, but the Smart Frame is closer to widescreen 16:9. That odd design choice means the frame needs to either add padding to show the entire photo or lop some off to make use of its entire display, and while it’s not usually an issue, I did find myself manually cropping some photos to 16:9 so they’d display correctly. (One group photo where the frame chopped off half my face comes to mind.)

At $400, price was far and away my biggest reservation with the Lenovo Smart Frame. That’s just too much money for most people to spend on a novelty like this — and the ones that do, frankly, should be able to expect a better overall experience. But as of writing, Lenovo is selling the frame for $200 at its own store. For that price, my endorsement is a lot heartier. If you were on the fence at full price, now’s definitely your opportunity.