Google is no stranger to pushing its popular Discover feed across its various platforms and products. You can even find it in Chrome's new tab page on Android these days, with its curated news feed based on your interests. Discover was first introduced in Chrome 54 and has received iterative updates to make it more prominent. It isn't finished, though, as it looks to make Discover even more visible in Chrome while in turn sacrificing usability.

We've been tracking several variants of Start Surface, a Chrome experiment that revamps the new tab page. A version that's slowly rolling out to users on Chrome 90 right now makes even more room for Discover. You can try it out by copying and pasting the following URL into Chrome. Select "Single Surface V2 Finale" from the drop-down, then tap the Restart button at the bottom.

Enable showing the start surface when launching Chrome via the launcher.

Once Chrome reopens, you'll need to restart it a second time — close it from the Recents screen and launch it once again from the app drawer. The new layout will show up after pressing the Home button in the tab menu. 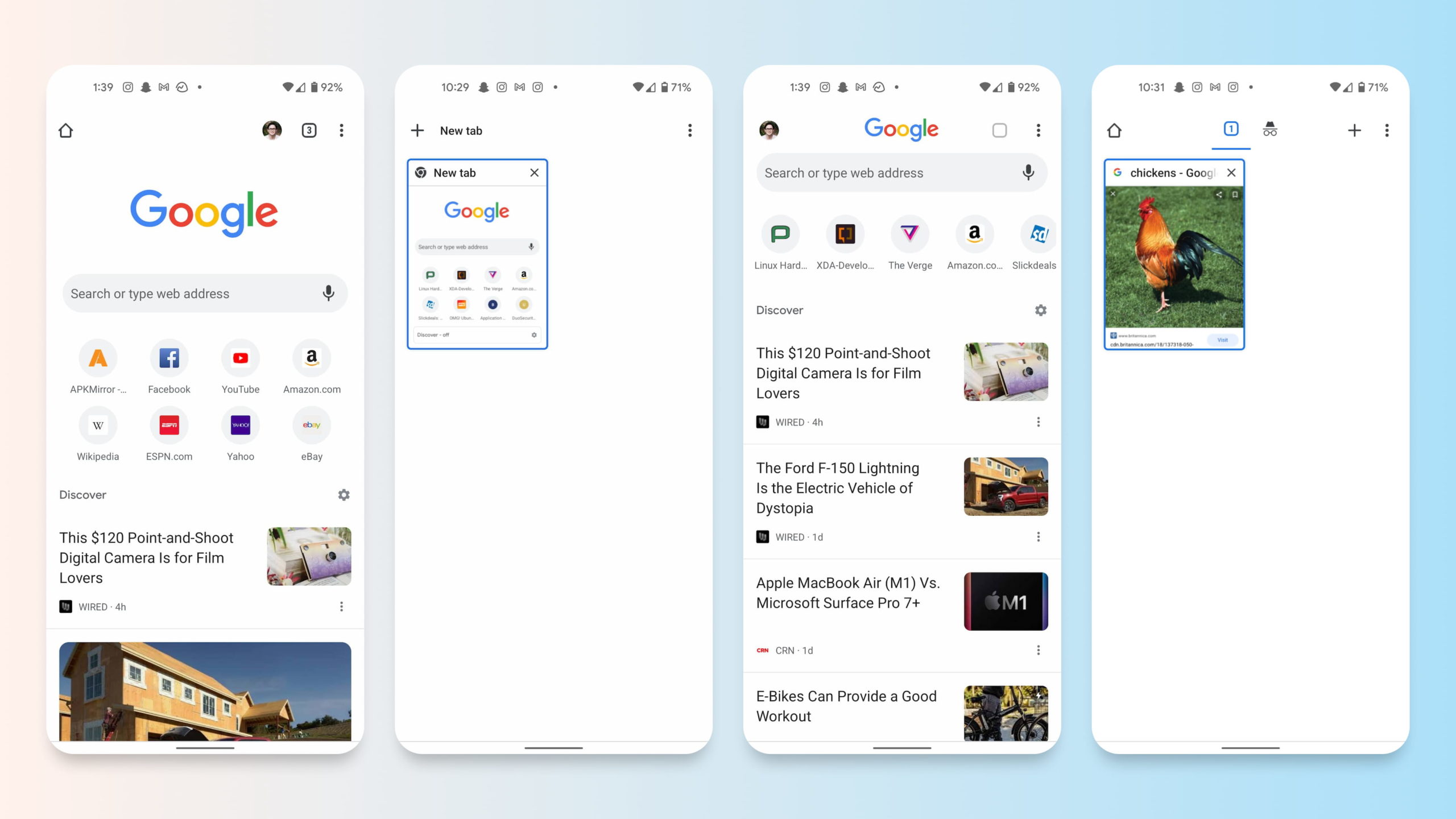 Chrome's new tab page takes on a more compact design. Unlike the current UI, the new layout reduces the Google logo and moves everything upwards. It also limits most visited websites to a scrollable single row of icons, but increases it from eight to twelve tiles. Start Surface also comes with behavioral changes. When adding a new tab, Chrome enters URL mode right away, removing the icons and Discover feed. The Home button will launch a brand-new tab instead of your replacing the page you're currently viewing. 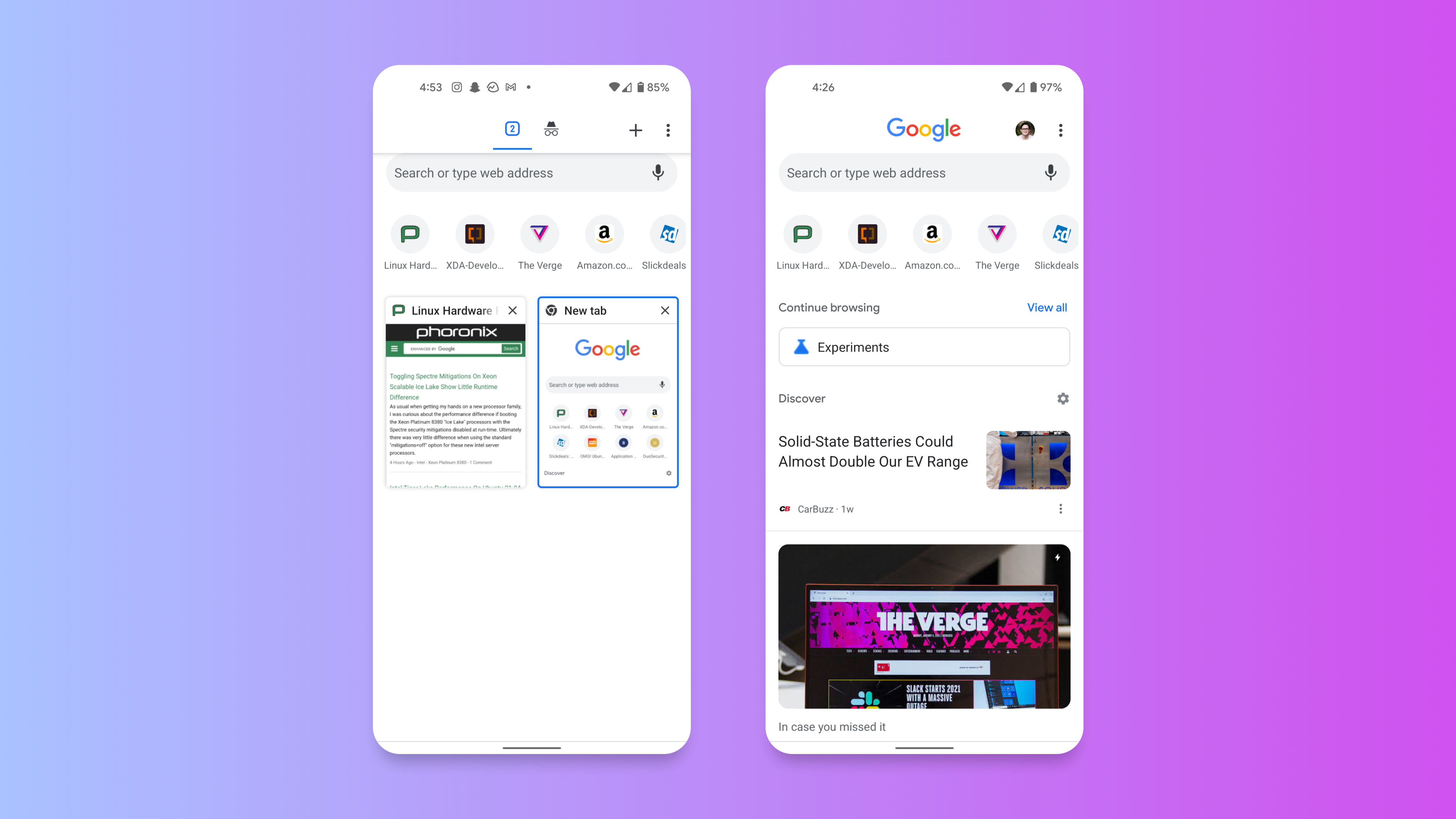 It's been a couple of months since we've covered Google's attempt to increase the Discover feed's visibility in Chrome's homepage with Start Surface. Since then, the company has been exploring different ways to make its feed even more prominent, and recently, a new version of Start Surface fills nearly the entire homepage with the Discover feed. If you somehow fancy this idea, you can try it out on Chrome 92, 93, and 94 by selecting "Enabled Single Surface V2 Finale + NTP tiles on Omnibox" under the Start Surface flag's drop-down menu. Once Chrome reopens, you'll need to restart it a second time — force close it from the Recents screen and launch it once again from the app drawer.

When you tap on the home icon, you'll notice that all of your most-visited websites have vanished. Google's Discover feed will conveniently occupy that space instead, filling up nearly the entire homepage with articles you (probably) won't care about. Your most-visited sites will find a new home in Chrome's Omnibox — similar to the other Start Surface experiments, they're limited to a scrollable single row of ten icons. If you're visiting a webpage, only the top two visited sites will show up. It's still early days, though, with Chrome 92 not showing any sites in the homepage's Omnibox. However, it's getting increasingly clear that Discover is the focal point of Chrome's redesign — here's hoping Google reconsiders.

The new tab page can't seem to catch a break with Google testing multiple versions — it's hard to keep track. Start Surface seems to be a blatant attempt by Google to get more of its Discover content in front of our eyes — and I'm really not a fan. Sure, some of my distaste for Discover has to do with it always suggesting low quality sites to me, and yes, I can always turn it off. However, this change shows that Google is trying to push users to use Discover more than ever, which is just not on in its current state as a source of mainly clickbait and poorly curated news.

Start Surface also makes the new tab page a lot less enjoyable to use. With the old design, I'm able to see all my Most visited websites at once without needing to scroll. I can also launch the site in a tab group, in an Incognito tab, or even remove it from the new tab page. With Start Surface, I'm unable to do any of these things. Since opening a new tab removes everything but the URL bar, I can't quickly jump to my most visited websites. Worse still, navigating to a site from Chrome's Home button launches a new tab. Unless you get into a habit of clearing your tabs, this will quickly devolve into a junkyard of old tabs.

For those like myself who hate Start Surface, the good news is that it's rolling out to a very limited number of people right now. The flag doesn't expire until Chrome 100, which gives us plenty of time to keep it disabled. In the interim, I'm hoping Google will take the time to collect feedback from users. If you're happy with the change, that's great! But if you're in the same boat as myself, I encourage filing feedback to Google by pressing the menu button, Help & feedback, then tapping Send feedback. We'll continue to track its progress and update you when we hear more.