Sony makes numerous headphones and earbuds across a range of prices, but the 1000X line is its flagship family with top dogs like the WH-1000XM4 over-ear headphones and the aging but still capable WF-1000XM3 earbuds. The latter were top-of-the-line when they launched almost two years ago, but newer options like the ANC-equipped Galaxy Buds Pro and AirPods Pro have overshadowed Sony's old buds. The updated WF-1000XM4 puts Sony right back in the thick of things with phenomenal noise canceling and premium features. The XM4s are without a doubt my favorite earbuds right now, but they don't come cheap at $279.99, and some of the competition is only a little worse for a lot less money.

Sony's last 1000X earbuds were enormous, but the new version slims down dramatically. The WF-1000XM4 earbuds are still chunky, but they no longer need the massive protruding paddles from the last version. That said, they do occupy every bit of available space in my outer ear. I can wear these earbuds for a few hours without any noticeable discomfort, but I could see someone with slightly smaller ears tapping out after wearing the WF-1000XM4 for an hour or two. They're not vented, so you will get that stuffy ear feeling after extended use, too. And props to Sony for adding IPX4 so you can sweat all over the buds without worrying. 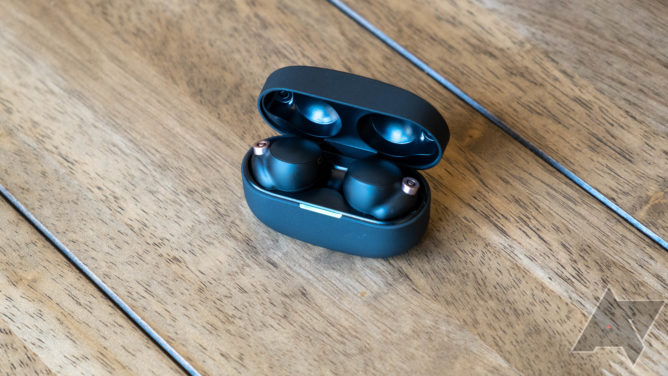 The earbuds come in two different colorways, both of which you've probably seen on Sony products before. Our review unit is the black and gold version, but there's also a white and gold. The gold rings visible on the outward-facing surface have a microphone in the center, one of several beam-forming mics that should make voice pick up a little better than the last-gen buds. The only Sony branding is on the side, which will be mostly hidden in your ear.

The earbuds both have touchpads, offering quick access to playback and ANC controls. One upshot of the beefy frame is that you can adjust and remove the buds without accidentally triggering the touch controls. When you remove the buds, the sensors on the ear-facing side detect that and will automatically pause your music. Right next to the sensor are the contacts for the charging case. Like most true wireless earbuds, the WF-1000XM4s align in the case magnetically. They drop in perfectly every time with no fiddling.

The case itself is a vast improvement over Sony's last attempt. It's about half as large as the XM3 case, making it easier to pocket the earbuds. There's a USB-C port on the back, and the bottom features Qi wireless charging coils, a new addition to this year's buds. The only drawback to the compact case redesign is that it offers just two additional charge cycles for the earbuds. That's fine, but I'd prefer a bit more. 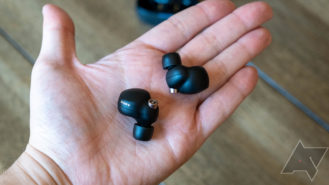 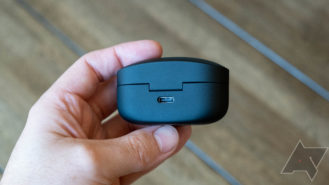 The WF-1000XM4 earbuds ship in a compact, environmentally-friendly carton. The efficient little package includes the earbuds, charging case, a USB-C cable, and three sets of eartips. That's fewer than you'd usually see at this price, but all three sets are high-quality foam that does a great job isolating noise. The texture is also slightly more grippy than most foam and silicone tips, which seems to help them stay in place. I rarely need to adjust the earbuds while I'm using them.

I'll break the suspense by saying this: the Sony WF-1000XM4 earbuds sound fantastic. Audio quality is subjective at a certain point, but I feel confident saying these earbuds are definitely among the best sounding you can get. The highs, lows, and everything in-between sound crisp and accurate on the WF-1000XM4s. Even twangy guitars hiding in a cacophony of other instruments come through loud and clear. Sony says it adjusts earbud tuning based on the music that's popular at release time, and that means a little bass boost this time around. The bass is better than you'd get in cheaper earbuds, but it's not overwhelming. Great overall tuning by Sony, and these earbuds support the higher quality LDAC audio codec. You'll have to turn this on in the settings, though.

Sony's Headphones Connect app isn't the best I've used, but it's far from the worst

Traditionally, TWEs haven't been able to match over-ear headphones when it comes to noise-canceling performance—the WF-1000XM4 are a notable exception. Sony's new V1 processing chip enables incredibly effective ANC that is very nearly as good as the WH-1000XM4 headphones. It drops continuous sounds like crowd noise or traffic to almost nothing, and even someone gabbing up a storm nearby is almost entirely muted. With music playing at half volume, I can't hear the outside world at all.

Sony promises eight hours of usage with ANC enabled, and I'm tracking very close to that in my testing. At least, it is with the default AAC audio. Flipping over to LDAC will shave a few hours off that time, so I'm not sure it's worth using LDAC if you're just streaming from Spotify or YouTube Music. Regardless, the battery life is well above average for premium earbuds.

A few features from the over-ear 1000X series have come over to the true wireless side in this revision. You get speak-to-chat support, which I know will make some people very happy. This feature automatically pauses your music and turns on audio transparency when it hears you speaking so you can have a conversation. I personally don't care for this feature because it's too sensitive even on the lower setting. A grumble or chuckle is enough to trigger speak-to-chat, which can get frustrating. Maybe I'm just a very vocal listener, though. I'm unabashedly pleased to have Quick Attention on Sony's new earbuds. Like on the 1000X headphones, you can tap and hold the left earbud to reduce audio volume and pipe in ambient sound. This is a great way to have a quick exchange with someone, and then it's right back to your tunes.

Sony says the V1 chip also powers improved microphone performance, and it is better than the XM3s—just don't expect miracles. In louder environments, callers have told me I sound a bit far away, but no one has been unable to hear me. Because these buds support Assistant natively, you don't have to devote a control option to calling up voice control. Just say, "Hey Google" and start talking. The buds are sensitive enough to make out what I'm saying while walking behind a lawnmower. In audio pass-through mode, the earbuds manage a fair reproduction of speech and ambient noise with little lag. However, diffuse sounds like the drone of a fan sometimes bounce back and forth between the left and right buds, and the sound seems to "skip" on occasion. It's a minor annoyance that I hope is fixable in an update.

Yes, as long as you can swing the admittedly high cost. The WF-1000XM4 earbuds are even more expensive than the last-gen buds, and those were by no means cheap. However, your $280 buys you the best true wireless earbuds I've ever used. The audio is superb, ANC is supernaturally good, and the battery life is better than most of the competition. I also like that Sony included high-quality foam tips instead of silicone. There are only three sets, but that should be enough for everyone to find a workable fit.

The charging case is not as slim or elegant as Samsung's or Apple's offerings, but it gets the job done, and the buds are easy to insert and remove. The earbuds themselves are chunky, but they're a vast improvement over the XM3s, which had a large external prominence. The XM4s take up a lot of ear space, but I've been able to wear them for a few hours at a time without issue. However, our own Michael Crider opted to return his set because they weren't comfortable enough. Given the price, I can't blame him. 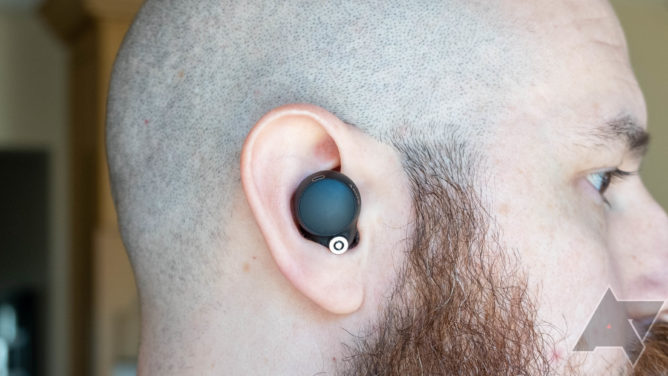 While the WF-1000XM4 are fantastic and easily earn our Most Wanted award, they're not for everyone. If you're the type who uses the included earbuds, and you never yearn for better sound, you probably should not spend almost three hundred bucks on the XM4s. That's a lot of money when the Galaxy Buds Pro are almost as good for $100 less. But hey, if you want the best, that's the Sony WF-1000XM4.

I had precious few complaints about the XM4 earbuds during my initial review, and I have even fewer now. After some additional testing and clarifications from Sony, I can confirm that you can do solo listening mode with either earbud. However, you need to disable voice assistant features in the settings. The gist is that if you've got Assistant or Alexa turned on, the earbud that controls access has to be online. If you don't care about that feature, it's an easy decision. This is still a minor drawback, but at least you've got options. 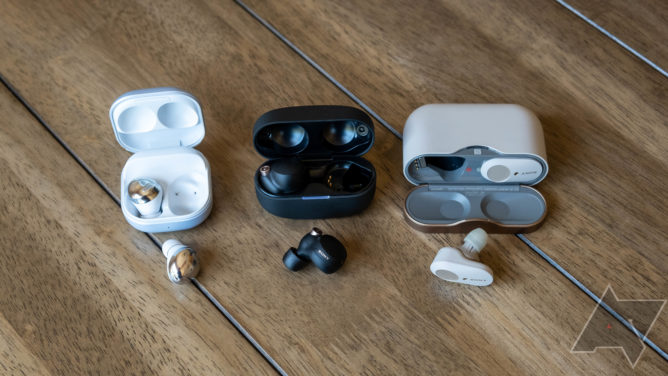 Another issue I talked about in the original review is admittedly minor: a subtle audio glitch occasionally caused the omnipresent ANC hum or audio passthrough audio to "skip." I've seen a few comments around the web (including here on AP) that mention the same issue, so I believe it was just the way the buds worked at launch. I chatted with Sony, and the company's engineers confirmed the problem. Sony has just rolled out firmware version 1.2.6 to address this and other issues.

In my testing, this update has fixed the audio glitch completely. There are no more skips or weird cut-outs. A cheaper product with this flaw would probably have never gotten a fix, but Sony is committed to its audio products.

So, there are just a few remaining issues. The lack of multipoint is probably the most glaring, but that's the only missing feature. The earbuds are also on the large side, as is the price. Nevertheless, the Sony WF-1000XM4 earbuds are the best overall option we've tested.

Final Fantasy I, II, and III launch on Android a day early as pixel-art remasters