Since its introduction during I/O 2019, Jetpack Compose was obviously destined to become the prescribed method of Android UI development. After more than two years in public development, it has hit the milestone many developers have been waiting for: an official 1.0 release. Alongside a stable release of Android Studio Arctic Fox, Jetpack Compose is ready for use in production code.

Google released a beta of 1.0 back in March, giving it a few months for final bugs to be identified and fixed. This includes some of the recently added features, like Compose Preview and Deploy Preview. The former allows you to see a live rendering of your Compose UIs in a number of different states, like light and dark modes, or with different font scaling. Deploy Preview is more functionally oriented and allows you to push updated code without completely restarting your app. Both of these require Android Studio Arctic Fox, which also saw a promotion to stable today.

Many developers have been waiting for a stable 1.0 release before integrating Jetpack Compose into their apps. Since the framework allows Compose to be used within existing views, or for existing views to be contained inside of a Composable, it enables developers to integrate Jetpack Compose into their projects at any pace — there's no need to commit to big transitions or even rewriting any code. Compose also integrates smoothly with other Jetpack libraries for things like LiveData and Navigation. All of the UI elements are styled with Material Design and support theming so you can customize the look of your app, and a rich animation API makes it easy to convey activity.

While a final 1.0 release is a major milestone, it obviously doesn't mark the end of development on Jetpack Compose. Google is publishing a public roadmap to upcoming features and capabilities that will be added to the framework. Keep an eye on it to see what's coming next. 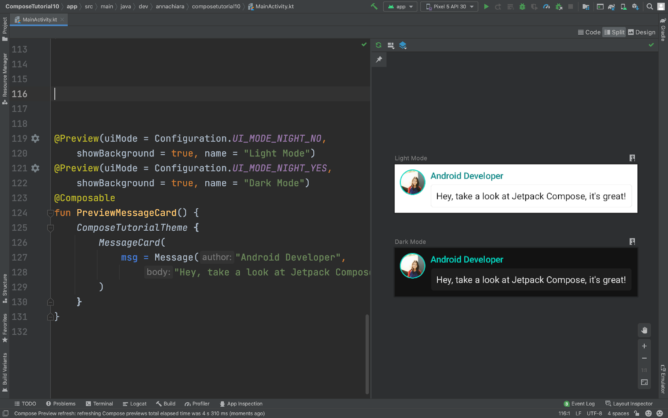 Also rolling out today is the stable release of Android Studio Arctic Fox. As you might expect, today's update features the usual run of bug fixes. However, Google is highlighting recent additions like the new Background Task Manager, which can be used to analyze background workers in your app so you can get a better view of performance issues. It joins a slew of other recent additions like simplified Wear OS pairing and emulator support, live editing of literals, a layout inspector for Compose, and more.

The stable releases can be found on the Android developer site and it contains the final release of Jetpack Compose. (Note: It may take a few minutes for the links to be updated.)