Android tablets have a mixed history, and while Samsung keeps up the fight in the premium space, the most successful tablets are much less expensive things like Amazon's Kindle Fires. In the face of the iPad, the only way Android tablets can really compete is with price. So it's a little curious that MediaTek would be releasing a new chipset in what is usually a Chromebook-targeted line claiming it's specifically for tablets — that is, unless it isn't destined for Android tablets.

The new Kompanio 1300T is TSMC-built (6nm), with an eight-core configuration mixing the recent Coretex A78s and A55s, paired with a slightly older ARM Mali G77 MC9 GPU. It also supports 5G, but sub-6 only — that likely rules out the most recent M80 modem, so it's probably using something like the M70. The modem also does 2CC CA and supports Wi-Fi 6 and Bluetooth 5.2. It also has MediaTek's APU for enhanced performance in AI-specific workloads. 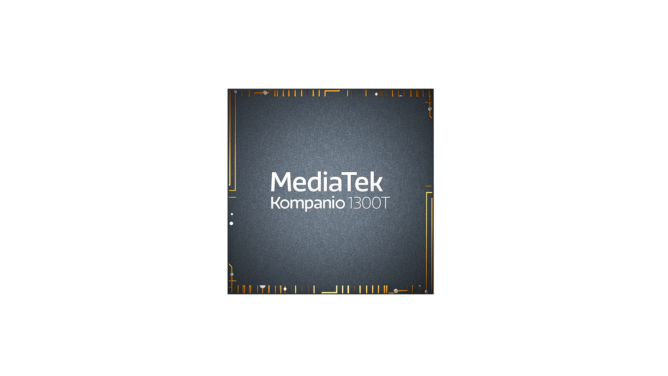 When it comes to what sort of other hardware the chipset works with, the Kompanio 1300T supports up to 2.5K displays (read: probably around 2560x1440) at up to 120Hz, including support for HDR10_ and MediaTek's proprietary MiraVision. It can talk to up to 108MP cameras, handle 4K 60 video encode and decode (including 4K staggered HDR), and does the usual low-power voice recognition stuff for our contemporary smart digital assistants, plus it can use MediaTek's HyperEngine 3 gaming optimizations for ostensibly improved game performance.

It doesn't sound like the Kompanio 1300T is set to compete with Qualcomm's highest-end chipsets, but it's a lot more than the usual as-cheap-as-humanly-possible Android tablet fare, and I'm a little curious precisely what it's targeting. Prior Kompanios ended up in Chromebooks, and the company recently showed off a Kompanio chip in a Chromebook working with an Nvidia GeForce RTX GPU, but, for whatever reason, MediaTek is quite specific in its announcement today that this new chip is intended for tablets, making no mention of Chromebooks at all.

However, it's possible the Kompanio could be true to its Chromebook roots and still be a tablet-specific chip: Chrome OS-powered tablets are a thing, and though they are a minority in the market, this could be an indicator of change.

Apparently, we won't have long to wait and see which tablets will get it. MediaTek says we'll hear hardware announcements in the third quarter of 2021 — in other words, in just the next couple of months. And if it is good, the new chip could make a dent in the lack of chipset competition — not that the mid-range-to-premium tablet market segment is particularly large outside Apple.