Last month Google revised its target timeframe for FLoC, the new privacy-focused replacement technology for advertising and other tracking cookies, into 2023. Now the company has a more precise timeline of events for its multi-staged plan to implement the Federated Learning of Cohorts tool for Chrome, which is now in the early stages of testing.

Previously planned to be fully implemented in Chrome later in 2022, Google is now aiming (via 9to5Google) to get all Chrome users transitioned to FLoC in the third quarter of 2023. By that time the company hopes to have weaned itself off of conventional cookies, tracking the web traffic and usage patterns of individual users, to aggregated tracking that allows advertisers to track groups of anonymized people instead. Google says it's a way to protect individual privacy while preserving the systems of advertising that let the web operate, but at this point they've managed to convince pretty much no one that FLoC will be an improvement. 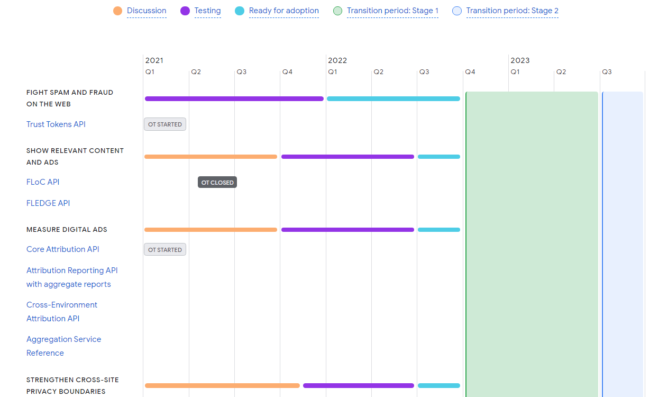 The new timeline site, part of Google's expanding Privacy Sandbox, lays out which components are still in discussion, which are in testing, and when all of them will (hopefully) be implemented. FLoC in particular won't get widespread testing until the third quarter of this year, though a small number of users are already in testing. That will extend into the summer of 2022, with the initial transition period into full adoption in Chrome beginning a little more than a year from now.