Above, you can watch the reveal trailer for eFootball. It offers a bunch of hype, as expected, and shows very little gameplay, and of course, totally avoids how the game will be monetized beyond existing as a free-to-play release. But if EA and 2K are examples of how cash-grabby soccer games can get, Konami changing its series into a free-to-play title should be incredibly concerning.

So far, we know eFootball will be built using the Unreal Engine and that it will launch worldwide on PlayStation 5, PlayStation 4, Xbox Series X|S, Xbox One, and PC this fall. Mobile along with cross-platform play will land at a later date, which is currently slated for winter. Of course, if you'd like to check out the current roadmap, it's available on the game's official website, and I've also pasted a screenshot below. 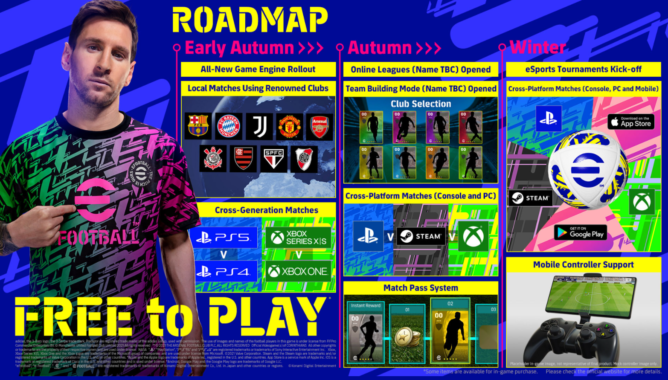 So while this new direction for the PES series probably won't affect mobile that much since our version of the game is already a free-to-play money-grab, I suppose the new engine could be something to get excited for. And hey, with eFootball using an engine that is undoubtedly useful for creating a game that works on all platforms, maybe all of the bugs the current mobile version suffers from won't be as much of an issue since many more people will be playing similar code across a bunch of platforms. So it would seem this series going headfirst into full-on greed as a free-to-play release on consoles and PC could be a boon for mobile players, as horrible as that sounds.

Netflix confirms it's working on games, but only mobile games for now