Not everyone needs or can afford a $1,000 flagship phone, but how much money can you save before a cheap phone crosses over from "affordable" to "terrible?" That's a line in the sand that moves every year from manufacturer to manufacturer and person to person. For me, the 2021 A02s rides the very edge. This is almost precisely the minimum viable smartphone, but it's $110 brand new, and Samsung promises an unbelievable four years of updates. For the price, I don't think you can go wrong, but spend more for a better phone if you can.

Note that specs vary between markets and even carriers. The US Cellular, Verizon, and unlocked versions have just 2GB of RAM, while the international model has 4GB of RAM, 64GB of storage, and lacks 5GHz Wi-Fi support. We reviewed the US unlocked model. 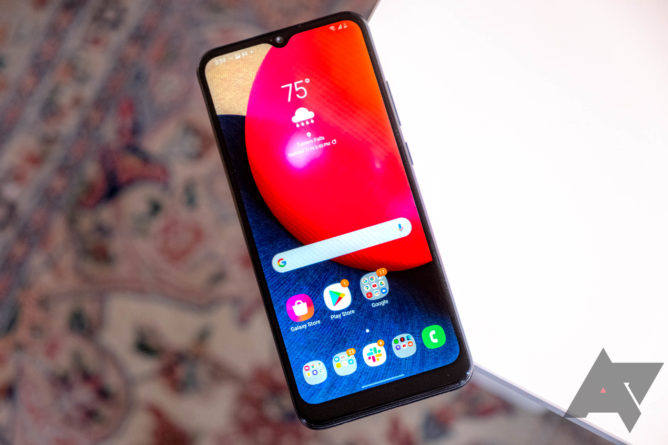 The A02s is a big phone, especially for the money. The 6.5" display would have been considered Galaxy Note-sized just a couple years ago. As you'd expect at this price, it has a plastic body, but it's textured with a geometric pattern composed of tiny lines at different angles that makes it more pleasant to use (read: less greasy) than the glossy plastic many cheaper phones have. 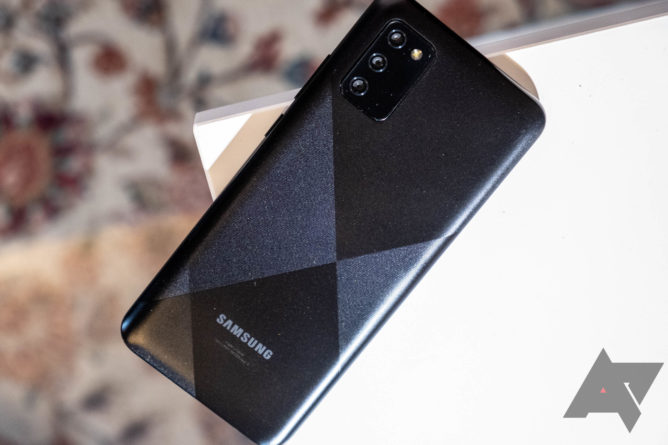 The glass-topped screen might be big, but it's low-res at just 720p. At an arm's length, text is crisp, but closer than a couple feet and good eyesight can see fuzzy edges. It's not the brightest display — fine indoors or on a cloudy day, but full sunlight can make it a little hard to read. Automatic brightness was so-so, though better than some other phones I've used recently. The screen is mostly edge-to-edge, with surprisingly narrow bezels on the sides, a notched top, and a big-ish chin at the bottom. As a budget phone, it retains its headphone jack, which is handy. It lives just next to the USB Type-C port on the bottom, used for charging. I'm very glad that even budget phones are moving away from Micro USB in the last couple of years. However, it doesn't have a fingerprint sensor, so you'll be using a more tedious PIN/password or an insecure camera-based face recognition to get into your phone.

I was surprised to see that this phone isn't just microSD-expandable for storage, but also dual-SIM, which is a nice bonus at this price. And with just 32GB of storage, you will probably need to use a microSD. That's just about the bare minimum of space to get by, and you'll be left micromanaging installed apps, offline media downloads, and photos within a few months.

Haptics are so-so, but audio performance was a bit of a surprise. It isn't stereo, but the single down-firing speaker gets far louder than I expected and doesn't distort too terribly — pretty okay for a smartphone.

In the box you get the phone, a charger, and a USB Type-A to Type-C cable.

Samsung's OneUI 2.5 is a little dated at this point, based as it is on 2019's Android 10, but it's well-known. Those that have used any Samsung phone in the last few years should feel right at home. If it’s been a while since you’ve used Samsung’s version of Android, the era of intolerable TouchWiz clutter and confusing UX is long over. Thank goodness. It's not "stock," but it's entirely comfortable. To my eye, it seems Samsung has made a handful of tiny tweaks for the A02s, like limiting haptic effects (probably to save battery). But at its heart, this is Samsung's now tried-and-true software, and it can run all the apps you depend on.

I did run into one major snag in our review, and that was the A02s originally refusing to connect to my home's wireless network. Subsequent updates fixed the issue (though it will still randomly claim a network has no internet when it does), but that requires updating the device courtesy of a hotspot or a second network it is willing to use; it can't update via mobile data. I expect most folks won't run into the issue, but if you do, it can be obnoxious to work around.

When it comes to longevity, Samsung told us the A02s will be getting four years of updates, with two years of OS upgrades — we assume carrying it as far as the Android 12 version of OneUI. With other budget phone makers like Motorola promising budget models a mere two years of updates and one OS version upgrade, Samsung makes them look a little like clowns.

Samsung still insists on bundling its own calendar, browser, and keyboard, but you'll probably want to replace them ASAP, especially on this phone. That's not because they're necessarily bad (it's your call, though I find Google's design language more pleasing). The real reason is that performance in Google's apps is usually better, and you'll need every iota of speed you can eke out here. At a minimum, definitely replace Samsung's keyboard.

In fact, general performance with the 2017-era Snapdragon 450 is pretty bad. If the phone is doing precisely nothing else, it can convince you it's capable for a few seconds or even a minute or two at a stretch, but that's an illusion. The second it touches on even a mildly demanding task or multitasking, expect everything to grind to a halt. Even just navigation gestures can be frustrating to use if the phone is doing anything at all in the background, and I've had the lockscreen PIN pad time out before it finishes fully loading. I'd encourage you to stick with software navigation buttons, but there's no fixing the general speed of the phone short of buying a better one. That also means, even if this phone is getting four years of updates, it will probably be almost unusable by the end of that window.

Though apps did seem to be pushed out of memory in the background very quickly with just 2GB of RAM on the US model, it didn't interfere with things like Spotify, but I doubt it will age gracefully. I'd rather Samsung gave us 4GB like the international version.

The A02s demands that you be patient with it, and while it can do most of the same things that better phones can, it can't do them very quickly. However, there's one big exception: Stay away from games. While most demanding titles are thankfully incompatible, many that don't strike the Galaxy A02s from their Play Store allowlist are stutterfests. It does manage some older titles alright, though, as well as the sort of games that can run on a potato with very low requirements.

Whether the underwhelming chipset or 5,000mAh battery is responsible for it, battery life on the A02s is stellar. I was able to snag just shy of eight hours of screen-on time over four days. That's very, very good. Samsung claims it can charge at up to 15W over Qualcomm's Quick Charge 2.0/Samsung AFC. Over USB-PD, the fastest I saw was 8W.

At first I thought the extra shutter button was a bug, but it's a feature: You can re-position it wherever you like.

There's no sugar-coating it: the A02s has an awful camera. Of the three on the back, precisely one does something important as the 13MP f/2.2 primary, though that narrow aperture lacks light-gathering ability. The other two cameras are 2MP "depth" and macro models for portrait effects and super-close photos. Neither is particularly useful, but it plumps up the numerical count on a spec sheet or in stores, which I assume was Samsung's goal. The biggest issue you'll run into with the A02s outside the generally poor photo performance is the fact that the phone indicates it's done capturing photos in many cases long before it actually is. About 2/3 of the low-light photos I captured for our review were outright ruined because of this. On top of that, autofocus can be hit-and-miss. Though I thought it was a bug at first, since I didn't enable it myself, the extra shutter button is actually a feature: You can position it wherever you like. However, I didn't enable it myself, so either it comes turned on or the general lag makes it likely to trigger it. 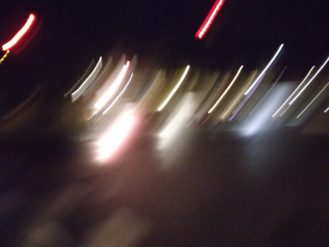 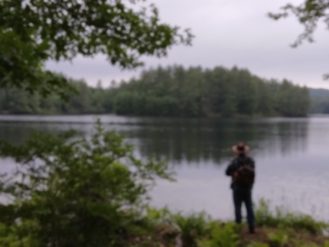 Left: The A02s said it was done taking the photo. It was not. Right: And it likes to grab focus poorly. Below: The mushy, noisy joys of a there-for-specs-only macro camera. 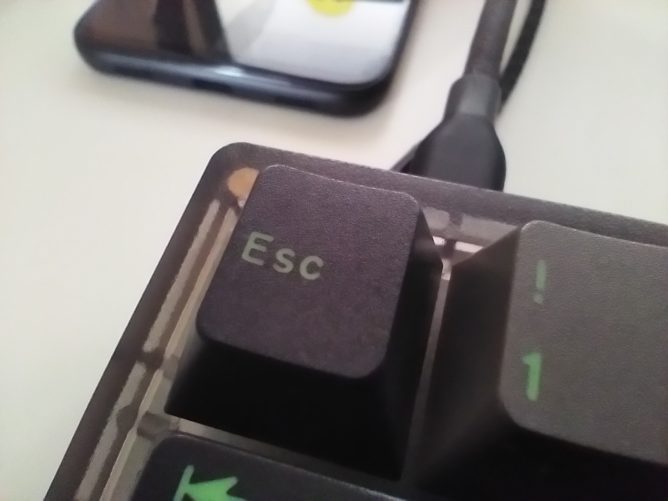 This is an objectively bad camera, but at $110, that's expected.

The Galaxy A02s isn't competing with flagships or even mid-range devices. It's slow enough that some basic software features are just about unusable without a great deal of patience. But everything works, it's $110, and you can depend on Samsung to value your security and keep the phone safe to use for the next four years. It may be slow, but it's reliable. In all, I'm pretty stunned at what you can get today for such a low price.

Admittedly, for just $60 more, you can get the $170 Moto G Play, which I also like. The Moto is much, much faster — the new Snapdragon 460 positively flies compared to the somewhat decrepit Snapdragon 450 in the A02s. Plus, the Moto has a fingerprint sensor, among other benefits. The A02s is, by all hardware metrics, a worse smartphone, but Moto's software commitment for most of its phones is basically a joke in 2021; it abandons them so quickly. 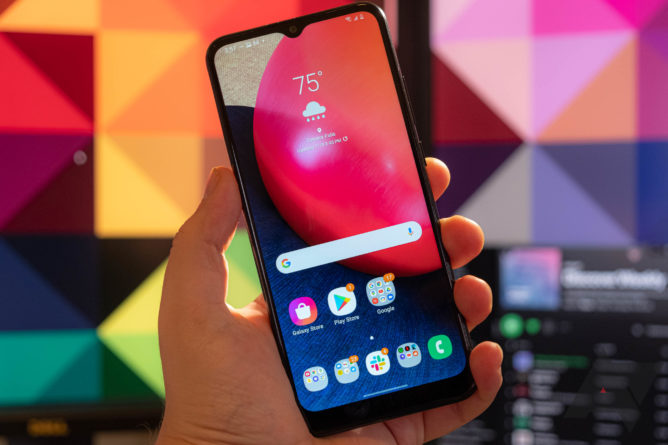 Comparing its spec sheet to almost everything that came out in 2021, the Galaxy A02s is maybe one of the worst new smartphones you can buy in hardware terms, but it's also among the cheapest and longest-lasting, in some ways besting models that cost two or three times as much. Still, it's a very clear compromise, and you should always take into account what you value most in a phone. For $110, this sails right on the edge of minimum viability, but if money is tight and you won't be frustrated by poor performance or the lack of a fingerprint sensor, this phone will keep you connected and secure for the next four years — few phones can make a claim like that.