Google is killing its now-ancient and practically unknown Google Bookmarks service. It's niche, but Google Bookmarks actually dates back to 2005 and let you save a URL together with a name, label, and notes to the big, scary, 2005-era cloud. In fact, Bookmarks may even have some more recent data from you whether you've even used it or not, as it seems to pull some info for starred locations from Google Maps. But, as the header at the service's site states, Google Bookmarks will "no longer be supported" after September 30th, 2021, and the company confirms to us that your starred locations in Maps won't be affected.

Before you freak out and ask: This will not affect your Chrome bookmarks, Edge bookmarks, Firefox bookmarks, or likely any browser bookmarks you care about or even know you have.

The news was spotted by the notorious/famous/macabre Killed by Google, who made a note of the upcoming passing just earlier today, and marks the death of an unusually long-lived (and, I suspect, unusually low maintenance cost) service. When it dies later this year, Google Bookmarks will have been around for almost 16 years.

Google Bookmarks may have been basically an unknown, but it had some bleeding-edge features for the time. On top of cloud-based storage for your bookmarks (itself impressive circa 2005), Google also gave it annotating features in the form of notes and labels which could be searched and sorted, plus a convenient Javascript-powered bookmarklet you could use to more quickly and easily save bookmarks to it from your browser (though that last feature seems to have been disabled now).

Google Bookmarks prior to its death, including the seemingly defunct Javascript bookmarlet. Image via Wikimedia.

If you see a ton of stuff in your own Google Bookmarks account and you're wondering what's going on, there's actually a reason for that. Google has apparently been either synchronizing or partially storing some of your starred locations in Google Maps there. For whatever reason, only "starred" locations are shown in Google Bookmarks. Other forms of Google Maps location saving, including favorites, "want to go's," and content from other saved and custom lists don't appear. 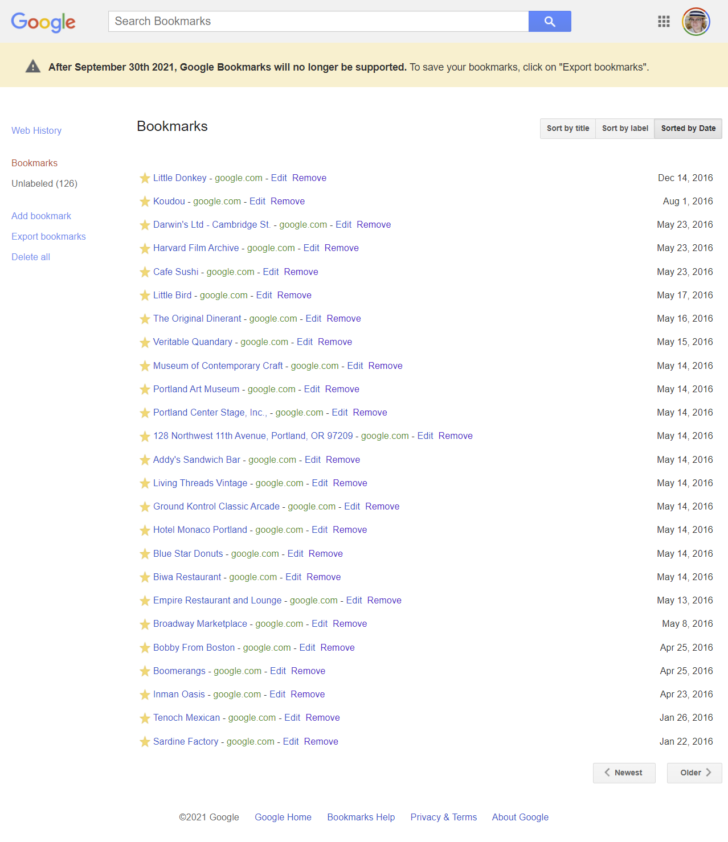 Although some may have speculated that meant your starred stuff in Maps could be leaving with the demise of Google Bookmarks, we suspected that probably wasn't true, and a Google Spokesperson has since confirmed those of us with starred items in Maps have nothing to worry about:

"Starred Locations in Google Maps aren’t going anywhere. All of your starred places remain intact, and you’ll still be able to save places to a list just like you always have."

The true reason for the overlapping data is likely something in the vein of the explanation supplied by @killedbygoogle. Whatever the cause, Google has explicitly confirmed that speculation regarding the loss of starred data is incorrect, and your stuff will be fine.

If you are worried, you can easily export your saved bookmarks in the meantime, and someone will probably come up with a solution for re-importing them back into Maps on the remote chance that something does happen to them. Just click "export bookmarks" in the site's sidebar.

A Google spokesperson has explicitly confirmed that you have absolutely nothing to worry about when it comes to starred locations, as we suspected:

"Starred Locations in Google Maps aren’t going anywhere. All of your starred places remain intact, and you’ll still be able to save places to a list just like you always have."

Back up your "Bookmarks" if you care, but that list of restaurants you love isn't going anywhere, and our coverage has been updated.

YouTube's got another new way to support your favorite creator (and also YouTube, the soulless ...