For the last 4 years, the Nintendo Switch has been out on its own as the best portable gaming experience outside of playing on your smartphone. Other attempts at a portable gaming PC have come and gone without much success, but for the first time, the Switch may have a real contender.

Valve has introduced the Steam Deck, which — as the name implies — leverages Steam's massive library of games and can apparently run many of them with impressively high settings. Like the new Nintendo Switch model, it's got a 720p, 7-inch touchscreen, although this one isn't OLED. It's powered by an AMD APU with a Zen 2 CPU (up to 3.5 GHz) and a GPU with 8 RDNA 2 compute units (up to 1.6 GHz) promising as much as 1.6 teraflops. This is accompanied by 16GB of fast LPDDR5 RAM — all-in-all, the raw specs are pretty remarkable for a small, portable piece of kit. It's also got an impressive set of controls, including four rear triggers and two trackpads for more precise controls, the kind we've seen on previous controllers from the company. Valve says these are as good as a mouse, but we'll have to wait for reviews to see if that bears out. The 40Wh battery is good for 2-8 hours of gameplay, which is a wide range but will depend heavily on which game you're playing. Playing Portal 2 at high settings, it will apparently last for two hours at 60fps or four hours at 30fps, to give you some idea.

Out of the box, the Steam Deck will run the Linux-based SteamOS 3.0, but when docked it will also be capable of running a desktop version of Linux. Furthermore, you'll be able to run Windows games on it without issue thanks to the Proton compatibility layer. It's also going to be an open device, so if you want to install Windows on it, you can. 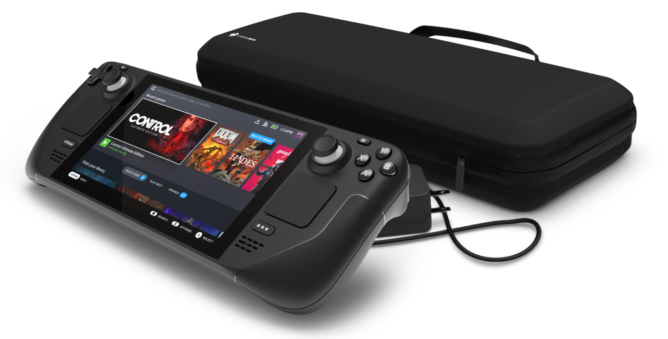 All models will come with a carrying case.

Perhaps the most astounding thing about the Steam Deck is the price — the base model will retail for just $399 (£349). That comes with a measly 64GB of eMMC storage, but there is a MicroSD card slot. Upgrading to the $529 (£459) model gets you 256GB of faster NVMe SSD storage, while the $649 (£569) variant doubles up to 512GB. If you want to turn the Steam Deck into a desktop PC, a dock will be sold separately, but we don't have pricing details for that yet. Pre-orders for the Steam Deck open today (July 16) at 10 am PDT. For comparison, the new Switch OLED model will cost $350 (£310) for the same 64GB of storage. Of course, you have access to all of Nintendo's first-party games and a great selection of indie titles, but looking at the quality of the hardware, the Steam Deck almost appears to be better value. Having said that, who's going to buy it? PC games are huge and 64GB of onboard storage isn't going to cut it. Sure, you can get a sizable MicroSD card for cheap, but loading games from that isn't going to be a great experience. With that in mind, it's hard to see this as anything other than an expensive toy for PC gaming enthusiasts. It's still pretty neat, though.