Back in 2020,  the Unicode Consortium decided it was better to delay the release of Unicode 14.0, potentially meaning there wouldn't be any new emojis in 2021. Thankfully, Emoji 13.1 was created as an interim release, bringing 217 new ones to our devices. We're getting closer to the release of Unicode 14.0, which, thanks to Emoji 14.0, would bring a handful of new ones on our phones. 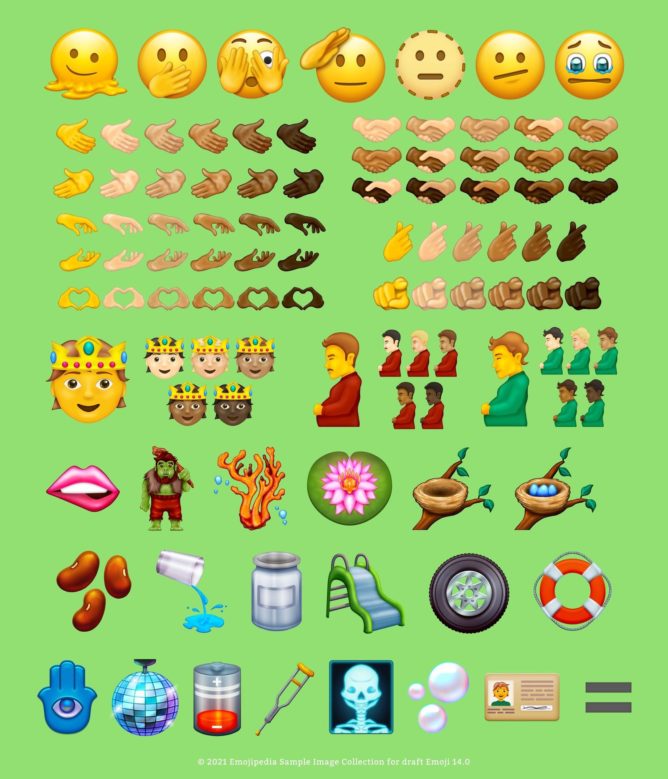 Although we still have to wait a couple of months before seeing them on our phones, the proposed list of new emojis in version 14 is now available, shedding some light on what to expect.

Most new ones focus on gender neutrality and diversity. As such, there should be a bunch of new handshake emoji combinations, offering a mix of various skin tones. Similarly, we should see a pregnant man and pregnant person emoji and similar variations for the crowned person ones.

In addition to these, the update will bring several new facial emojis, including a melting face, a saluting one, a dotted line face, another one with a diagonal mouth, and one holding back tears. The proposed Face with Open Eyes and Hand Over Mouth emoji is designed to make the 🤭 emoji consistent across platforms, which show either a serious or laughing face.

When it comes to availability, we shouldn't see these emojis before at least October 2021. Indeed, this is a proposed list, which will then need to be approved by the Unicode Consortium before being implemented on devices, possibly starting with a Pixel phone between October and December 2021. In any case, it won't be before mid-2022 that the majority of devices would have received the Unicode and Emoji 14.0 updates, allowing them to fully support the new emojis.

In the meantime, some of these emojis could be removed before the final approval in September. However, there's a way for you to influence which ones will make it to the final version, using this link to cast your vote.

New OLED Nintendo Switch pre-orders open today — and what are you going to do, NOT buy one?