OnePlus will make its proper Nord successor official on July 22, but for now, we can only learn more about the Nord 2 thanks to leaks. While we've already seen first renders of the phone and got official confirmation regarding a few key specs, we've now got a much more complete picture thanks to a leak from 91mobiles.

As we already suspected, the Nord 2 will look much like the OnePlus 9R, with a protruding camera array on the top left of the back and a selfie camera in the top left corner of the almost bezel-less display. 91mobiles says that this panel will measure 6.43 inches diagonally at a FHD+ resolution and a 90Hz refresh rate — right on par with its predecessor's. The back will be available in "Grey Sierra" and "Blue Haze," much like the gray and blue variants we know from the original Nord. There's supposed to be a special green leather back edition, too. 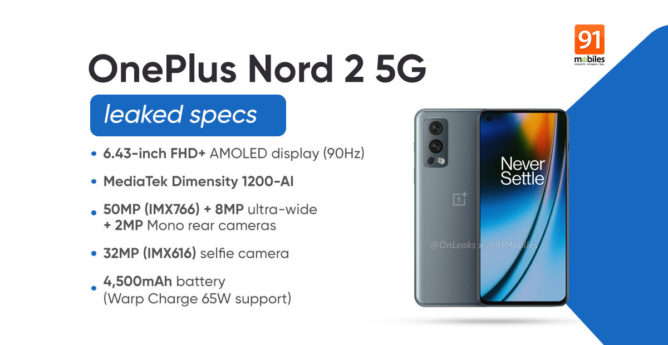 As rumored before, the Nord 2 will have a slightly different camera setup with a primary 50MP IMX766 sensor, which you can find on many other BBK Electronics midrangers. It's supposed to be accompanied by an 8MP ultrawide and a useless 2MP monocolor camera — a shame, since I personally liked the 2MP macro. On the front, there's a singular 32MP selfie sensor, making for a much prettier display cutout. As always, we'll have to wait for the reviews to be able to properly judge this hardware, though. The camera sure weren't terribly impressive on the original Nord. 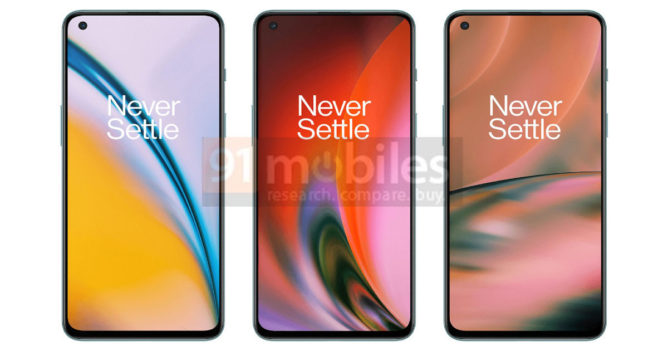 91mobile has a few more tidbits to share, like a 4,500mAh battery with 65W WarpCharge support, UFS 3.1 storage, dual speakers, dual 5G, and a plastic frame sandwiched between two Gorilla Glass 5 layers front and back. These features are accompanied by the usual more or less meaningless buzzwords, like Haptic 2.0, AI photography, AI display, and AI gaming modes. It looks like there won't be a headphone jack again. We already know for a fact that the Nord 2's centerpiece will be the Dimensity 1200-AI processor that Mediatek co-developed with OnePlus specifically for this phone.

The Nord 2 looks to be a solid iterative upgrade over the Nord, though we shouldn't expect anything to flashy. That leaves us hopeful that OnePlus is focusing on improving its recent software shortcomings, with system updates and security patches taking ages to roll out. The company has already promised Pixel-beating software support by merging OxygenOS with ColorOS, so let's see how things pan out.