Personalizing your Chromebook's desktop is key to spicing up your device with a modern, fresh look. With Google's attractive selection of stock backgrounds (that you can download here), it's easy to find a wallpaper that matches your style — as long as you don't mind dealing with its mediocre wallpaper-selection interface. For years, choosing a background has been a bit of a drag thanks to awkward sorting and confusingly poor performance. That may soon be over, as Google is rebuilding its wallpaper picker from the ground up.

Google has been working on a new wallpaper experience for over a half year in attempt to covert it into an SWA (system web app) from its aging Chrome app counterpart. The developers initially planned to integrate the wallpaper picker into the system preferences page (as reported by ChromeUnboxed), but that plan has since changed to create a new standalone app instead. We've been tracking Google's efforts since it added the Chrome flag to activate the new wallpaper experience, and just recently, the app became functional, complete with a fresh look. Intrepid users on the Canary channel can see the new UI by copying and pasting the following URL in bold into Chrome's address bar:

Switch its drop-down box from Default to Enabled, then restart your Chromebook. Once your session comes back up, you'll see the brand new wallpaper app after right-clicking the desktop and selecting "Set wallpaper" from the context menu. 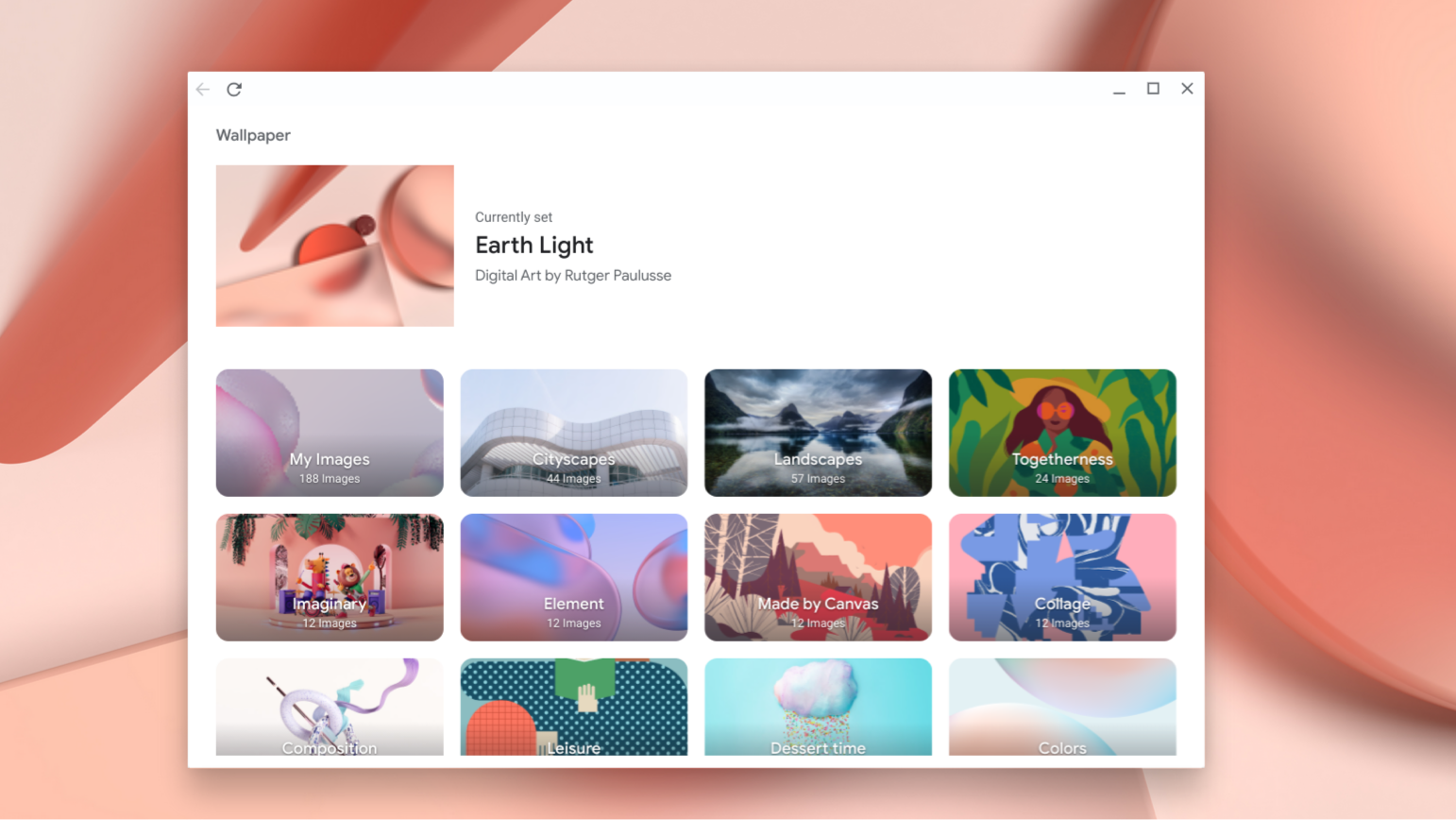 The wallpaper picker's appearance looks strikingly different from before. There's a sprinkle of Material You in it, with liberal use of rounded corners, Google's Product Sans font, and larger text that's comparable to Android 12's system settings. It retires the old vertical layout for a horizontal grid, akin to Google's wallpaper app on Android. Chrome OS sorts the backgrounds by their respective collections, which you can access by clicking on the rounded-off thumbnails. There's a navigation strip just above the preview showing your applied wallpaper, which changes depending on which collection you've accessed. Unlike the old app, scrolling is buttery smooth — no weird flashes or lag to be seen.

Even in its early stages, the new wallpaper experience is leagues ahead of the old wallpaper app. The jitters, random glitches, and messy organization made it outright frustrating to apply a wallpaper to my desktop — I ditched the picker altogether and used the Chrome OS file manager instead. In fact, I was really surprised how terrible it was when I purchased my first Chromebook. Personalization is one of the first things most people get into when setting up their device for the first time, and going through that mess really isn't a good look for Chrome OS. The new picker solves a host of problems. 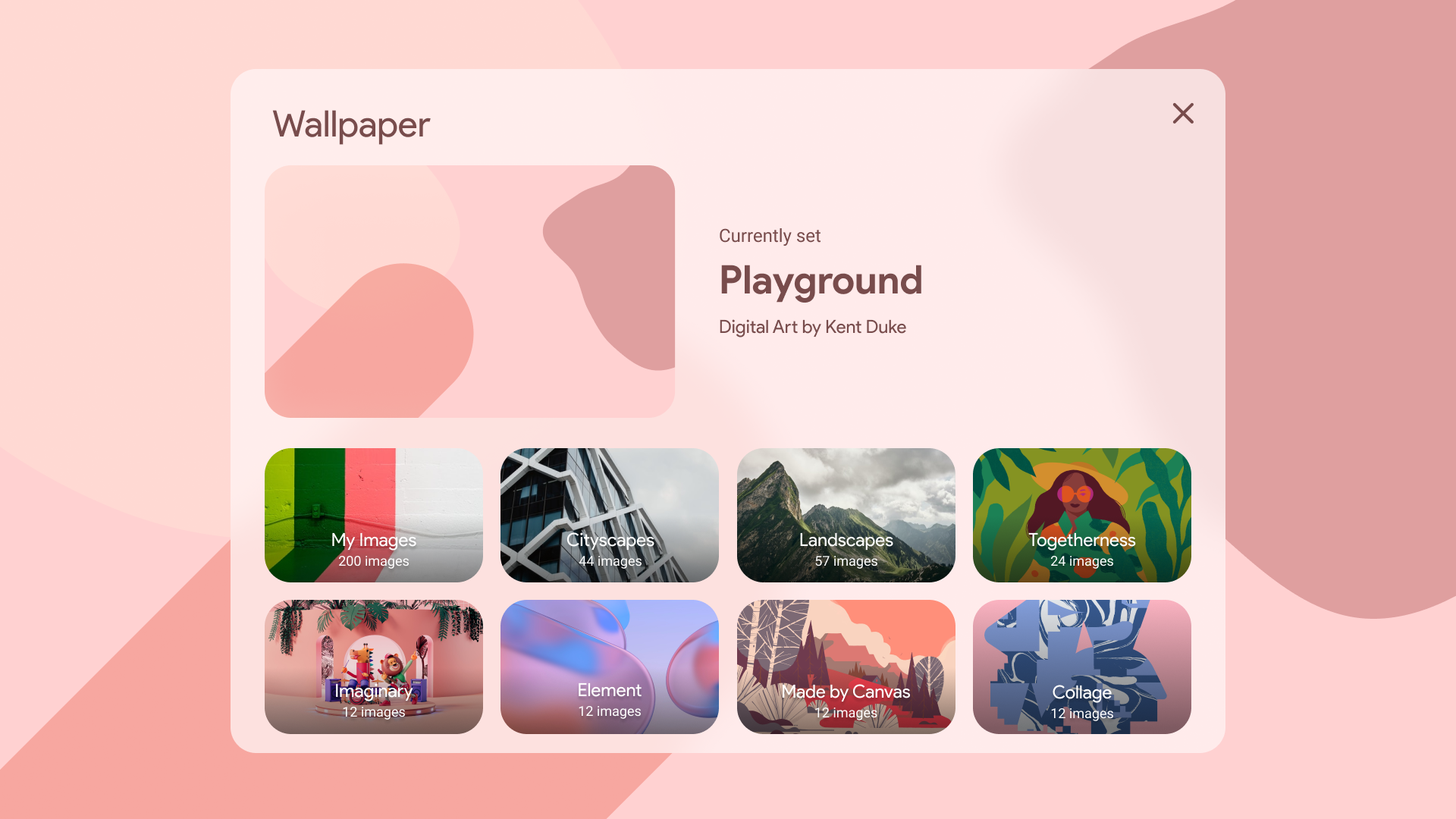 A mock-up of how the wallpaper picker could look like when it's complete.

That said, the awkward title bar, jank when resizing the wallpaper picker, and the lack of animation are clear signs it's not a finished product. While I expect these issues to be addressed in subsequent Canary updates, there are also a couple more things I'd like to see. Right now, just about everything about the picker uses Google's new design language, except color extraction. I think the picker would look sick if it extracted the color from your wallpaper and applied it to the app's background. I'd also love (like many others) if Google brought its Live Wallpapers to Chrome OS. Quality of life improvements really go a long way to help enhance the Chrome OS experience, and I'm all for them.

The Mega Man X series is coming to Android, and you can pre-register right now