TCL has spent most of the modern smartphone era making phones under brand names like Alcatel and BlackBerry, but it recently stepped out of the shadows to brand phones as plain old "TCL." It's released a few mid-range devices over the past year, but the TCL 20 Pro 5G is the most ambitious piece of hardware yet. It has a high-quality OLED screen, a quartet of cameras, and a very attractive design. However, TCL is also asking more for this phone, and the $500 price tag puts it up against capable phones from Samsung, Motorola, and others.

When you look at the specs all listed out (as you can below), the TCL 20 Pro 5G seems like a reasonable deal. However, integrating a phone into your life takes you beyond the specs, and there's less to like under the surface. The TCL 20's software is buggy and inconsistent, and the cameras are middling at best. Even the 5G connectivity, which is supposed to be a big selling point of this phone, was disappointingly spotty. TCL is making progress, but I'm not sure it's enough.

Based solely on appearances, the 20 Pro 5G is the nicest phone TCL has ever made. It looks and feels like a premium piece of hardware, particularly on the backside. The phone has a glass back other similarly priced phones, but TCL gave the panel a slick two-tone finish. The side with the camera sensors is glossy, and the rest has a matte texture. There's still enough of that matte glass to lessen fingerprint build-up and improve grip, though. I also like how the four camera sensors are all lined up under the glass panel—that's right, there's no camera hump. 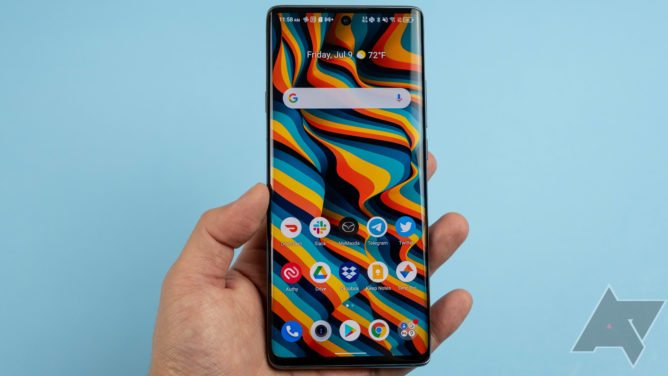 The display has an aggressive curve on the left and right edges—it's about the same radius as Samsung's Edge phones from a couple of years ago. I don't personally like curved screens because they even make the phone less comfortable to hold and edge touches are never completely eliminated. That said, the curve feels intentional and well-integrated with the design. The rear glass panel has the same degree of curve at the edges, allowing the two panels to meet up symmetrically with the aluminum frame between them. The metal strip is a bit narrow, but it's smooth and provides a respectable amount of surface area to hold. I wouldn't call this a comfortable phone to hold, though.

As for the panel itself, TCL must have dropped some cash on OLEDs because this is a much better screen than I expected. It's a 6.67-inch 1080 x 2400 OLED with HDR support. The color reproduction is excellent, solid viewing angles, and it gets bright enough to use outdoors. It's not going to hit Galaxy S levels of sunlight readability, but it's better than I expected. However, TCL's "Sunlight display" feature that boosts brightness comes at the expense of lower contrast, which can make the screen look muddy. The only spec that falls short is refresh rate, which is a mere 60Hz. There's a hole-punch camera at the top center of the display, and the cutout is a little larger than you'd see in a true flagship phone. 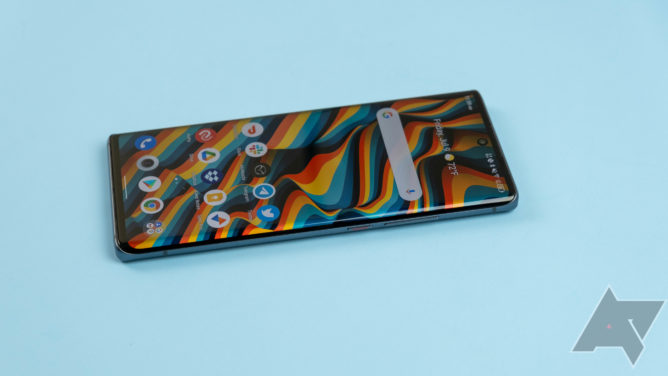 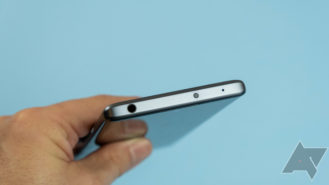 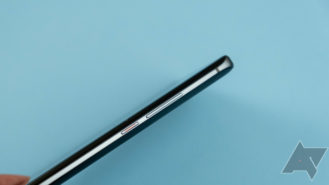 There's an optical fingerprint scanner under the display, and I've found it to be slightly too low—it's in about the same place as the OnePlus 9. The sensor is a bit slower and less accurate than a phone like the OP9, but it's not unusable or overly frustrating. It's just a "get what you pay for" situation.

The USB-C port, SIM tray, and mono speaker are all on the bottom edge, and up top we have two notable surprises. There's a headphone jack (yay) and an IR blaster, the latter of which is extremely uncommon in US phones these days. The power and volume buttons on the right edge are sturdy and tactile, and I like the red accent inlay on the power button. On the opposite side, there's a programmable button that you can use to launch apps, call up Assistant, turn on the flashlight, and more.

TCL includes the usual manuals and SIM ejector with the phone, but you also get a clear plastic case. It'll probably look terrible in a few months, but it'll make the phone easier to hold until you can find something more your style. The charger maxes at 18W and comes with a USB-A-to-C cable.

The TCL 20 Pro 5G runs on the Snapdragon 750G chip, which is not very common in the US. For the uninitiated, this is an 8nm octa-core chip with two high-power cores and six efficient ones. I've found the performance on this phone to be excellent overall. Apps open quickly, and hopping between them is a breeze (unless the quick switch gesture acts up, which it does sometimes). The experience is very smooth, at least insofar as it can be at 60Hz. TCL also goosed some of the animations to make the phone feel a little faster. 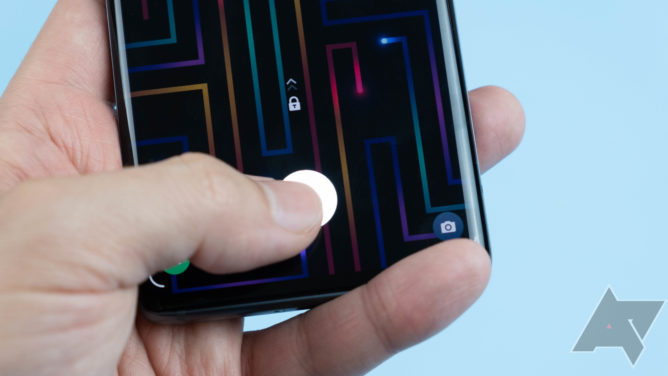 You get Android 11 out of the box, along with TCL's aptly named TCL UI. This is not a UI that completely replaces the style, but it does make a lot of (mostly unnecessary) changes.  TCL also has a problem with bloatware, which is surprising for an unlocked phone. It includes it has its own apps for music, weather, files, video, and more. Plus, TCL has included icons that look like apps but actually link to settings pages. I would prefer not to have any of that cluttering up the phone. The app drawer also defaults to showing your apps split up by category, but of course, it doesn't know anything about most apps. So, there's a giant block of "Other" at the end, making it a pretty dumb default.

The problems go beyond bloat—TCL's software experience is clearly a step down from the likes of Google, Samsung, or OnePlus. Many of the custom features in TCL UI are buggy or just bad ideas. Features like the Samsung-eque Edge Bar and Fingerprint Quick Launch are poorly implemented and not worth using. TCL has also locked do not disturb mode to also hide your notifications. You can change that setting on other phones, but not here. The TCL 20 Pro also has the option to adjust color temperature based on ambient lighting, which I usually appreciate. However, the changes are so abrupt as to be distracting. I also encountered issues with connectivity which occasionally required rebooting the phone.

TCL promises two OS updates, which is solid for a device in this price range. On the flip side, security patches are guaranteed for just two years as well. For $500, there should at least be a third year of security updates.

With its slightly undersized 4500mAh battery, longevity has been solid but not good enough to stand out from the crowd. I'm averaging six or seven hours of screen time with heavy use. This phone won't make it through two days, but you should be able to get one comfortably. It charges at 18W, which is acceptable. But again, at $500 I would like to see OEMs pushing the envelope with charging speed a bit more. I'm happy to see 15W wireless charging included, though.

The thing I like most about the camera array is the way it looks on the phone. Performance is not great, though. At this price, I expect OEMs to put a little effort into the camera setup, even if it means an ugly camera hump. However, TCL's choices for this phone would be better suited for a device that costs half as much. There's a 48MP primary camera, a 16MP ultrawide, and the tweedle-dee and tweedle-dum of smartphone photography: a depth sensor (2MP) and macro camera (5MP). They're both useless. 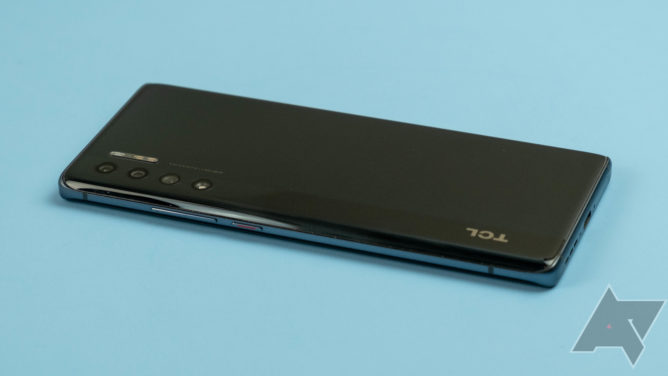 The primary 48MP camera takes binned 12 MP shots, but more often than not, the results are disappointing. In bright outdoor light, I've gotten a few photos that I really like—but I want to emphasize just a few. The camera is slow, and even OIS can't save you from blurry shots indoors. The colors look a bit muted even in good lighting, but the effect is more noticeable when light isn't perfect. My wife rarely comments on photo quality when I share snapshots with her, but she went out of her way to tell me she does not like the photos from the TCL 20 Pro 5G. No one will ever be happy they're taking photos with this phone, but there are times it won't completely disappoint you.

Probably not. The TCL 20 Pro 5G looks like it should cost more than its $500 price tag, but looks aren't everything. Those camera sensors that blend so seamlessly into the chassis are not very capable, and the software could use work. The phone is also not very comfortable to use with that extremely curvy display, complete with accidental edge touches.

For $500, I'd like to see longer update support, a higher refresh screen, and software that doesn't feel slapped together. What it comes down to for me is this: you shouldn't spend $500 on a phone with bad cameras in 2021.

This is a fine phone, but there's nothing special or interesting about it. I would suggest anyone looking to get a device in this price range hold off for a few months to see what the Pixel 5a has to offer. Alternatively, there's the Samsung Galaxy A52 5G, which has a better OLED, longer updates, and better camera performance. Or... just buy a Pixel 4a. It's not as pretty, but it's better at the rest. 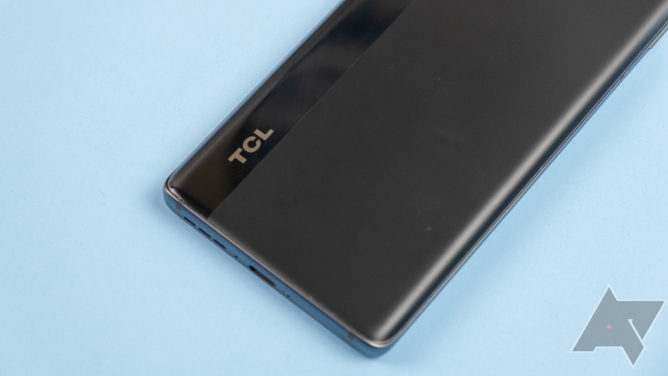 Android will soon let you start playing games before they fin—